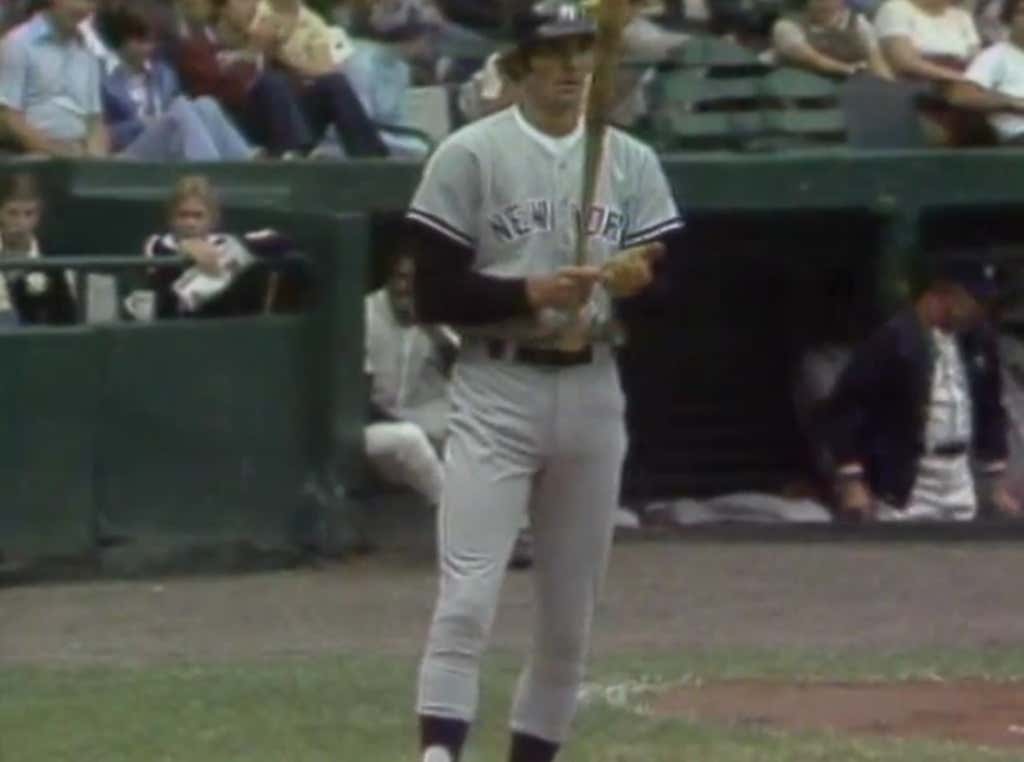 Making his debut with the New York Yankees, Dave Kingman hits a majestic home run at Tiger Stadium. Kingman’s blast is one of five for the Yankees as they beat the Detroit Tigers 9-4. For Kingman, it is the fourth team he played for in 1977, and fourth team for which he has homered. Dave Kingman began the year with the New York Mets and also played with San Diego Padres and California Angels.

Dave Kingman was born December 21, 1948, in Portland, Oregon. After leading USC to a victory in the College World Series, Kingman was the first player taken by the San Francisco Giants in the secondary phase of the 1970 MLB Draft. He had previously been picked by the California Angels in 1967 and the Baltimore Orioles in 1968 but did not sign.

Dave Kingman made his debut with the Giants in 1971 and had modest success over the first four years of his career. In 409 games with San Francisco, Kingman hit 77 home runs with 217 RBI, while batting .224. Before the 1975 season, Dave Kingman was sold to the New York Mets. It was with the Mets that Kingman showed what he could do with his power bat. In 1975 he set the Mets’ club record by hitting 36 home runs, earning the nickname Kong.

Dave Kingman was the original all or nothing home run, hitter. While hitting 36 home runs with the Mets in 1975, Kingman batted .231. A year later Kong topped the record with 37 longballs, many of which we among the longest shots hit in baseball that season as he was named an All-Star for the first time in his career. The 1977 season would bring struggles for Dave Kingman as he had just nine home runs over the first two and half months of the season while batting .209. With free agency pending at the end of the season, the Mets would trade Dave Kingman on June 15th to the San Diego Padres for Paul Siebert and Bobby Valentine. The trade coincided with the Tom Seaver trade and was known as the Midnight Massacre for the Mets.

With the Padres, Dave Kingman found his power stroke, as he hit 11 home runs in 56 games, batting .238. As the season was winding down, the Padres were not planning to resign Kingman placed on waivers. The California Angels claimed him on September 6th. With the Angels, Kingman had a pair of home runs in eight games, batting .194. His moment was not done, however, as he was traded on September 15th to the New York Yankees Randy Stein and cash considerations.

With the Yankees in a tight pennant race with the Baltimore Orioles and Boston Red Sox, Dave Kingman found himself making key at-bats at the end of the season. Kingman had four home runs in eight games, while hitting .250 with the Yankees, as they won the American League East. Despite his substantial contribution in the final week, Kingman was ineligible to play in the postseason, joining the Yankees after the September 15th deadline.

In total, Dave Kingman had 26 home runs in 1977, batting .221, as he played for four different teams. Ironically all four teams were in different divisions, in the era in which there were only four divisions, something that would not be repeated. After the season he would sign with the Chicago Cubs. With the Cubs Kingman had some of the best years of his career, as he had 48 home runs to lead the National League in 1979, batting .288. After three years with Cubs, Kong was traded again, returning to the Mets in 1981. With the Mets in 1982, Dave Kingman led the league with 37 home runs but batted .204. The worst batting average ever for a league leader in home runs. Kingman would be benched by the Mets in 1983, hitting just 13 home runs with a .198 average as the acquisition of Keith Hernandez, left him without a position.

The Mets would release Dave Kingman after the 1983 season. He would find himself with the Oakland Athletics in 1984 as Designated Hitter. Kingman topped 30 home runs in all three seasons with Oakland but continued to underwhelm with his average. After the 1986 season, he found himself blackballed from the game. Through 16 seasons, Dave Kingman had 442 career home runs, and a .236 average, and nobody wanted to give him a shot to reach 500 home runs.