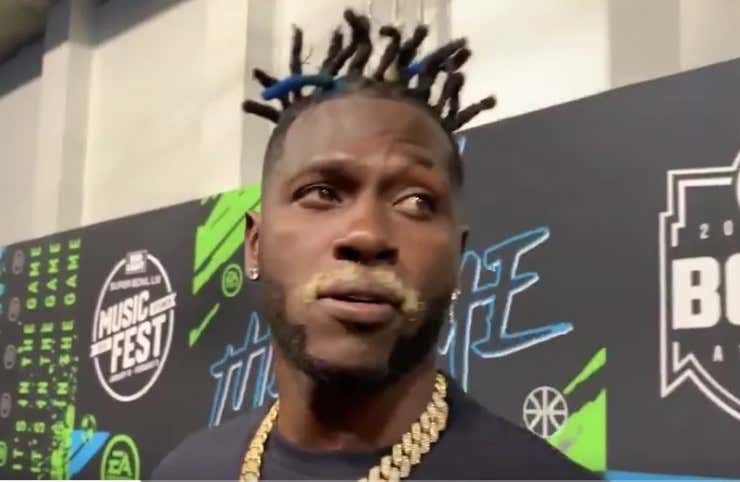 Antonio Brown has been a widely recognized, nationally known public figure since, at the very latest, 2011, his breakout year in Pittsburgh. He’s also been a New England Patriot for nine days. Which seems like as good a time as any for Sports Illustrated to take a deep dive into the personal history of this very famous celebrity who’s been in the public eye for pretty much a decade before signing with Patriots.

Needless to say, it’s not a flattering look. Because, though it should come as a surprise to no one who’s been paying attention all these years, Antonio Brown the Person is pretty much a dick:

SI conducted interviews with more than two dozen people who have employed, worked for, coached, or played alongside Brown—some who have taken legal action against him, and others who have not—and reviewed police and court documents from jurisdictions ranging from Miami to Pittsburgh to Oakland. In a half-dozen lawsuits, he is accused of refusal to pay wages to former assistants and part-time employees. Court documents and interviews also suggest a pattern of disturbing, sometimes bizarre behavior—including, SI has learned, a second woman’s allegations of sexual misconduct by Brown. …

In June 2017, Brown agreed to host a charity softball game in Pittsburgh to benefit the National Youth Foundation [where] Brown noticed a portrait of himself as well as its artist, a woman in her late 20s in from out-of-state [and] he invited her to come to his home in the northern suburbs of Pittsburgh to create another painting of him. … The artist says at one point she was in a kneeling position while painting and turned to find Brown behind her, naked, holding a small hand towel over his genitals. …

Brown has had acrimonious relationships with several women in his life. Police were dispatched to his Pittsburgh-area home on domestic disturbance calls three times in the last four years. Each incident involved his longtime girlfriend Chelsie Kyriss, the mother of three of his five children; none resulted in an arrest. According to the police report of an August 2017 incident, Kyriss accused Brown of throwing a bottle of cologne and a bottle of lotion at her during an argument, then leaving for a preseason game. Officers observed no injuries to Kyriss, who, according to the report, was hesitant to pursue charges for fear of it affecting Brown’s career. …

According to a Hollywood (Fla.) Police Department report, on Jan. 18, Wiltrice Jackson, who had a daughter with Brown, and the receiver were involved in a domestic dispute. Jackson arrived at Brown’s Hollywood residence seeking reimbursement for their daughter’s hair appointment. A shouting match ensued as Brown refused to let her into his residence, and, per the report, Brown pushed her, causing her to fall backward.

I could excerpt more but you can see for yourself in the link. I’m not editing it for content, but for length. It’s a portrait of a guy who comes across as a lousy human being. Treating people like hot garbage. Stiffing them out of money he owes them despite the $69 million he’s made in football. The cops being called to his house more than every person in my social circle combined. Whipping his junk out where his junk ought not be.

React to it however you want. But the one thing you can’t be is shocked that Antonio Brown is an immature narcissist who treats people badly. If you had any other impression watching him all these years, I guess I wish I had your faith in humanity. Because I never picked up that vibe from him watching him destroy two franchises that gave him a job, made him rich and then pandered to and enabled the bejeebers out of him.

Maybe not all of the stories in this report are completely true. You have to say that now. And according to Ian Rapoport, neither the league nor the Patriots saw the sexual assault allegations coming. And if Mr. Kraft knew the were, he wouldn’t have OK’ed the signing:

Sources have said that neither the Patriots, nor the NFL, knew of the coming charges against Brown prior to his signing in New England. Had the team known, one person familiar with the situation said, owner Robert Kraft would not have signed off on the signing.

Brown is compelled to cooperate with the league and be truthful, as per personal conduct policy, and one source said he will do so.

But there’s not one story in this article I have a problem believing. Nor does it change my mind one iota about Mr. Big Chest or him being on the Patriots. I’m not Tony Dungy. I don’t think these guys are “role models.” I’m not going to climb up on a cross and preach about how “disappointed” I am. I want Antonio Brown to get open and catch passes and go from now until mid-February not counting his touches, causing problems with his team, drawing stupid penalties, getting sued or getting arrested. That’s it. And like I said last week before all this began, I gave him  a 10% chance of making it five months without causing a major controversy. He lasted 5 hours.

And even if nothing comes of this lawsuit, if the complaining party withdraws it or he buys her silence, he doesn’t get suspended by the league and somehow manages to stay out of controversy the rest of the season, it’s not going to be about falling in love with him. It’s going to be about loving what he does when the Patriots are on offense. It’s going to be about helping the guys I do like and do root for win games, t-shirt & hat games, and rings. Then he can go be a shitty person on somebody else’s time.

So I’m not disputing this SI piece. Nor does it change the way I look at Antonio Brown. I’m curious why it came up now instead of a year ago, but that’s life when you’re the New England Patriots I guess. Everything just matters more.