Yet another goddamn masterpiece by Mike Camerlengo, who was featured on this very website when Kate blogged his incredible video comparing Always Sunny moments to NFL teams and has made some other hilarious pop culture content like 60 second breakdowns of Karate Kid, Rocky IV, and more as well as unleashing this gem of a tweet onto the internet.

However, this blow-by-blow recap is by far his most important work yet because of how big of a moment it was to millions of children of the 90s. While the Cold War between the United States and Russia had ended years earlier, the one between Zack Morris, AC Slater, and their fans had turned into a powderkeg unlike anything the world has seen since 1930s Europe. Zack and Slater may have hung out in the same crew, they were most certainly not friends. Instead they were acquaintances that ran in the same circle as they battled for their high school’s Cool Throne reserved for the coolest kid in school as well as the girl of everyone’s dreams Kelly Kapowski (except for that weird Tori season that we shall not speak of or when Slater and Jesse were together).

Which is why it was kind of an upset that Bayside’s Helen of Troy wasn’t the reason for this fight but instead a new girl named Joanna that may or may not have been a grown ass woman older than any of the teachers Old Balls has ever blogged. 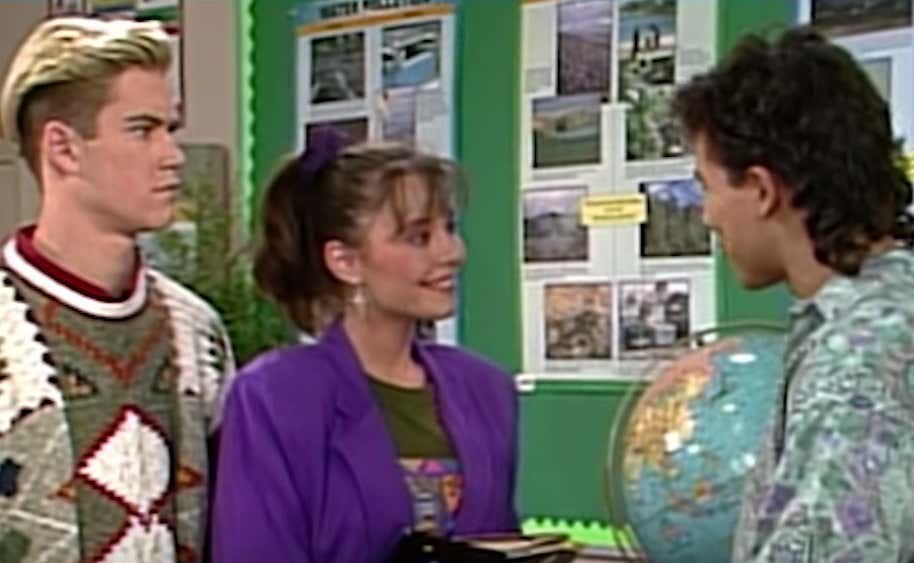 As a Team Zack guy, I want to call this video slanderous hogwash because it paints my guy in a bad light. However, Mike C. nailed every single point directly on the head. Zack’s brain wanted no part of AC, but the hormones rushing through his body had him write a check his ass couldn’t cash. I’d love to give Zack credit for hulking up to the big bad AC Slater. But we all know what everyone in school was saying when they heard the blonde preppy kid attacked the captain of the wrestling team.

Now if this fight happened today, a very wealthy Zack would be able to snap his fingers like a super villain and have his goons make Albert Clifford disappear from society forever.

Nonetheless, Zack he had to stand up for himself in order to have a chance with that girl that is no younger than I am now instead of trying to get back into Kelly’s good graces. Zack was never the brightest bulb in the box. Or the kindest. Or loyalist. Okay, we all know Zack was a huge piece of shit to the point that there is an entire video series called Zack Morris Is Trash. But the point remains you have to give him credit for taking to fight to Slater, no matter how much the odds were stacked against him, just like the allied forces storming the beaches of Normandy.

Wow, that was a lot of historical war references for a Saved By The Bell blog. Time to disconnect from the internet for a while and readjust my world view. However, I must once again tip my cap to Mike Camerlengo for a fight breakdown on par with anything Robbie has done for the UFC or Portnoy has done for hillbillies bashing each others brains in at a boxing match.