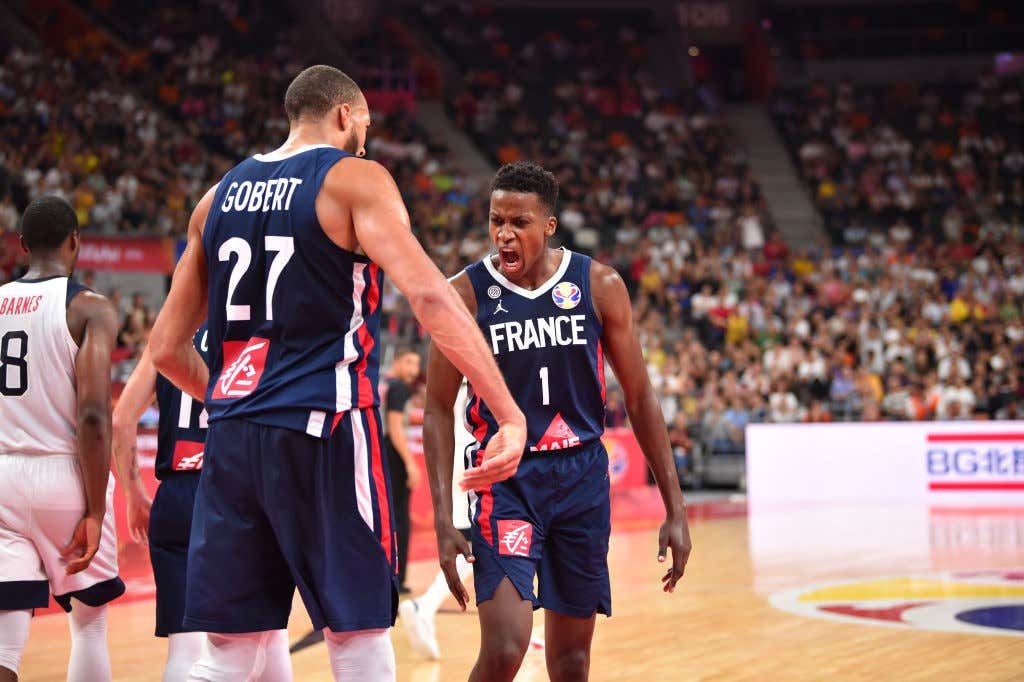 First Team USA blew a 78 game winning streak in international play to a loss against Australia. It was a fake game so it didn’t really matter, but it sure as hell was embarrassing. Well today they took things to a new level by snapping a 58 game winning streak in FIBA when using NBA players with a loss to France which means this team will not even medal. WOOF. That’s bad, like really pathetic. Give France credit, Evan Fournier and Rudy Gobert were monsters, they made the plays down the stretch to pull off the upset, but I’m sorry this is on Team USA. They were outplayed for pretty much this entire game outside of their run in the third quarter when they took a brief lead, but then to allow an 11-0 run in the fourth quarter and miss a BILLION free throws, they deserve the heat they are going to get. Pop deserves heat for some of his rotation decisions, Kemba deserves heat for having the worst game in the history of the sport, and offensively this team was nothing but isolation basketball which usually turns out terrible. There will be no three peat for Team USA, they are now the laughingstock of the tournament. No other way to spin it.

And make no mistake, if not for Donovan Mitchell who was a STUD, Team USA gets blown the fuck out in this game. His offense carried this team for three of the quarters and that was nice to see because he’s been fairly streaky so far. His take over ability is what should excite Jazz fans, but there wasn’t nearly enough Mitchell in the fourth. Instead there was wayyyyyy too much Kemba. For the first bad game of the tournament, Kemba sure put up a stinker. Maybe we should have seen it coming when he turned the ball over on the opening possession, but he struggled with tight ball pressure all night, and then at the most important parts of the game it felt like Kemba was trying to shoot his way out of his struggles instead of moving the ball and playing the right way. His isolations against Gobert late were terrible and huge momentum killers. Not exactly what you want to see! Add to it missing 2 of 3 FTs late and it doesn’t get more pathetic than that. Pop had to take him out down the stretch but didn’t, and it cost them.

Aside from Mitchell, Marcus Smart actually showed up which was nice. His defense was a huge reason why they were able to erase a 10 point deficit in that third quarter, and his offensive rebounds are what helped them build their lead. The way he was able to handle Gobert in the post on switches is why he’s one of the most versatile guards in the league, but god dammit did his 4 missed FTs hurt. An 80% FT shooter you need to make your FTs Marcus, that’s Day 1 stuff. The amount of Celtics that killed this team from the FT line will haunt me for at least a week. This is why I obsess over good FT shooters missing FTs, it always comes back to bite you in the ass.

It’s just hard to win when you get absolutely nothing from Myles Turner on either end, Khris Middleton once again shot like dick, and your other bigs in Brook Lopez and Mason Plumlee barely even see the floor. Why not just throw Plumlee out there to use his fouls and beat up Gobert? Going small worked at times this tournament, but France’s size was too much of a factor. A rebounding difference of 44-28 tells you all you need to know. Was Pop asleep at the wheel? Was he listening to Thibs on the broadcast or something? Not the best FIBA showing from Pop either if we’re being honest.

Listen, as someone who was not shy about pumping up Team Shamrock, there is no way to spin it. Their leader played a big time role in this outcome. Celtics fans have to wear that and accept the clowning that will be coming on the internet. It’s OK, they didn’t have Tatum so if anything this just shows how valuable he is. Jaylen actually had himself a good game today and a great tournament. Smart did Smart things. But they choked when it mattered most, there’s no other way to say it. Blowing a 7 point lead with 8 minutes to go and letting Frank Ntilikina outscore both your starting guards in Kemba/Mitchell down the stretch is inexcusable and frankly a disaster.

So with the dream of a three peat over all that’s left is shame and embarrassment. Bounced in the quarterfinals? Absolutely disgusting.