Say what you will about the Orange Bad Man, but the man understands retail politics. In only the second campaign on any level – local, state or national – he’s got his not-at-all small thumbs firmly on the pulse of the electorate. They say you’re trailing every candidate in the other party in the polls? They say Washington is a shambles? That it’s nothing but talk of investigations and impeachment? That the nation is divided and polarized?

Well, then this is how you stop all that divisiveness. This is how you unite the public and rally them to your cause. You go to North Carolina and you talk about how much you love Mr. Kraft, Tom Brady and Bill Belichick. That’s Panthers Country, right? They love the Pats down there. They want to vote for a guy who’s friends with New England’s holy trinity. I guarantee you Ken Woodley appreciates the references to the guys who Dominated the Foe of his beloved Panthers in 2003.

And North Carolina is not alone. America respects winners. And to borrow one of the president’s own phrases, the Patriots have done so much winning people say, “I’m tired of all the winning.” So invoking them should sway millions of undecideds in all those swing states. This is the blueprint for a landslide. If he keeps this up at every campaign stop between now and November 2020, I think we’re looking at Nixon over McGovern in 1972, Reagan over Mondale in ’84 or New England over Pittsburgh Sunday night.

Again, say what you will about his administration, his leadership or his policies. It’s your right. But you can’t say he doesn’t know how to win hearts and minds in an election. To win, surround yourself with winners. 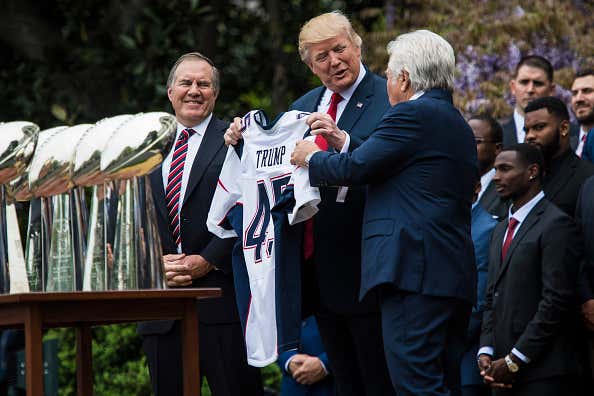