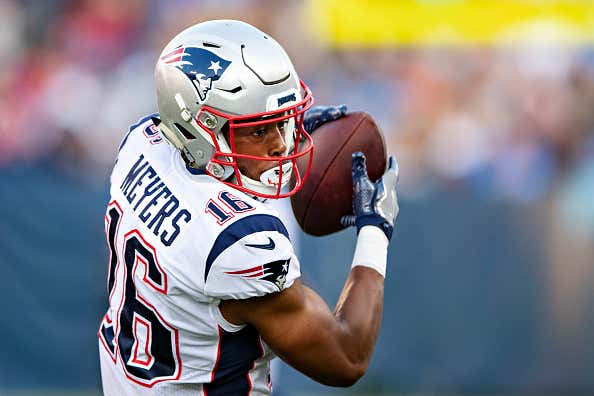 At the beginning of the month (so about a week into training camp) I declared my allegiance to my annual Patriots Preseason Crush. I got in on the ground floor of the IPO of an emotional investment in undrafted rookie wideout Jakobi Meyers.

As camp has progressed, Meyers has moved up the ranks from one of those depth guys you refer to as “and the rest” to someone that makes you wonder whether you should bother teaching yourself to spell his name with a “k” and an “i” or whether there’s an “s” at the end, to taking reps with the second unit to today, when he lined up with the starters. …

Meyers has been the absolute standout of Camp Belichick thus far, [catching] everything thrown at him practically. … [I]t’s not that far out of the realm of possibility that he really is as good as he looked, even if he did go undrafted.

In the month that’s followed, Meyers has done nothing but reward the effort I put in to learn to spell his name. And even if I was tempted to remind myself of all my past Preseason Crushes who ghosted me almost as soon as I told them how I felt, I won’t do it in this case. There’s no need. Not only is he my new boo, it turns out he’s the darling of the analytics crowd at Pro Football Focus. Both with his production last year at NC State and how he’s graded out in the fauxball games so far. (Emphasis mine):

Meyers finished the 2018 season with a receiving grade of 88.8, which ranked eighth among 601 FBS wide receivers with at least 100 snaps. However, despite his production, he was not selected in the 2019 NFL Draft and later signed with the New England Patriots. Early reports out of spring practices were already praising Meyers. Those voices only got louder in training camp as Meyers kept making plays. … Even though these reports are usually encouraging, rookie receivers are not always able to translate strong practices into making plays in a game situation. However, that was not the case for the former NC State standout, as proven by his performance in the preseason. 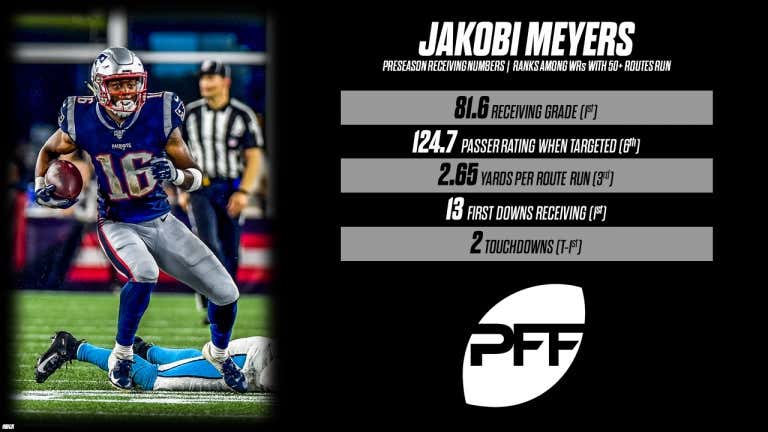 Meyers’ versatility gives him a chance to contribute in the regular season, as well. He played nearly the same amount of snaps in the slot (39) as he did lined up wide (46), and his receiving yards per route run is also very similar when he lines up in the middle of the field (2.78) compared to when he lines up wide (2.49).

So he was vastly under rated coming out of college, has been productive and versatile and has put on some of the best preseason wide receivering the league has seen? Sounds like my guy.

Go ahead, tell me how Meyers has been doing this mostly against guys who are about to start the Uber Driver portion of their professional lives. Remind me about how excited I was about Bethel Johnson, Bam Childress or Zach Sudfeld. Point out how most of his production has come from playing with the backups and he and Brady haven’t seemed in sync yet. Throw a big Solo cup of ice cold reality in my face. I don’t care. The analytics nerds have confirmed what my eyes and my gut have already convinced me. To squeeze a little more juice out of that IPO analogy from earlier, Jakobi Meyers’ stock price is going up and I’m still buying. My emotional 401K is invested in this kid and I’m convinced that as long as he stays healthy, he and I are in for a very lucrative future.