According to a random website I found which gave zero sources but that I trust anyway, there are approximately 49 million bubbles in one 750ml bottle of Champagne, and once poured, each glass emits at least 30 bubbles per second. It’s got 3x more gas in it than a beer, giving it around 90lbs of pressure per square inch. I’m not a scientist, but those corks have got to feel some strain. 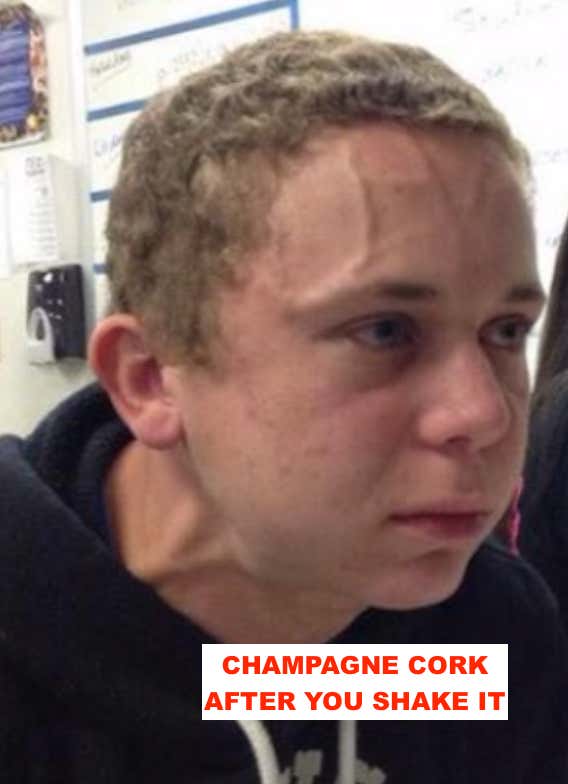 In 2015 Wired Magazine got into the physics of it & discovered the average cork pops out at a whopping 27.3 mph. Pretty damn fast for a small object that’s often very close to people’s faces. 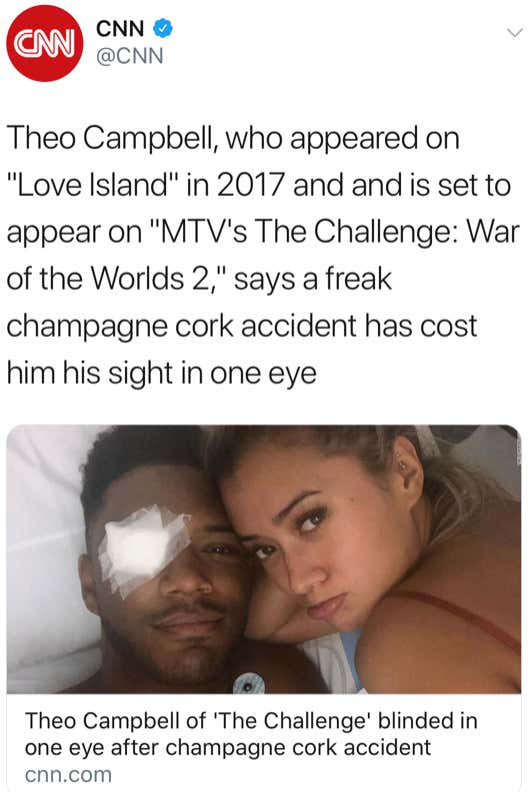 Theo Campbell says a freak accident has cost him his sight in one eye.

Campbell, who appeared on “Love Island” in 2017 and and is set to appear on “MTV’s The Challenge: War of the Worlds 2″ thanked his supporters on Instagram after undergoing surgeries following a strike in the eye by a champagne cork.

The accident resulted in a gruesome injury, he said.

Thanks for all the messages and support I’ve got over the last couple days they’re all very much appreciated! So yeah basically 2 eye surgeries later after a really unfortunate accident, I’ve lost all vision in my right eye as it got split in half, who would have thought a champagne cork would be the end of me… But I still have 1 eye left, looking at the bright side of things. Thanks for flying out to look after me as well babe, if anyone knows where sells cool eye patches let me know.

Apparently Campbell was minding his own business, having a good ‘ol time on the island of Ibiza, when a rogue cork came flying from another group & landed a direct hit on his eye. Kudos to him for having a positive attitude & great sense of humor about it, because all jokes aside that has to be pretty crushing. Holy buzzkill, Batman.

If there’s any silver lining here, consider it a PSA. He took one for the team so that others may tilt the bottle outwards & away from others, so that we may live another day unharmed (minus all the other things that can happen when you drink champagne.)

In closing, to remind everyone of the power of Champagne, here’s a couple YouTube videos I’ve hand selected for your fine Stoolie palates:

How “Guy Gets Hit In The Balls With Champagne Cork” only has 305 views is beyond me. The suspense is fantastic:

The “Champagne Bottle Opening Fail Compilation” has some solid mishaps, especially at 01:00 where a frustrated guy with a sword almost slices a waiter’s hand off.

And because this is America, here’s a guy getting tacti-kewl in “How To Uncork Cristal with a 50 Cal“. Skip to 01:21… pretty impressive. (I suggest eye protection all around on this one):