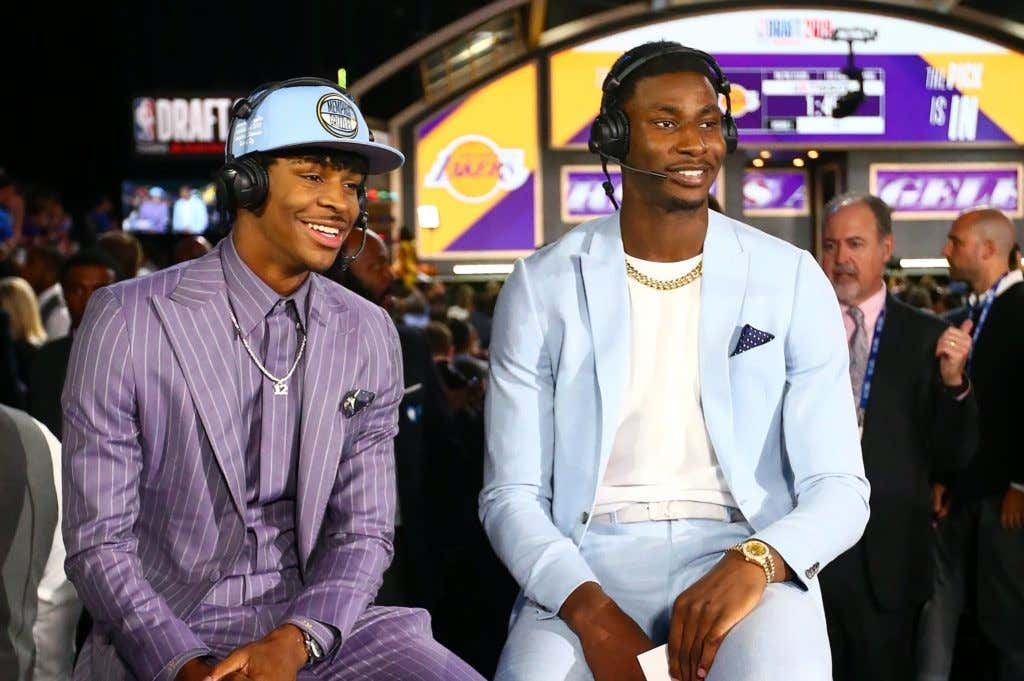 We’re at a point when it comes to talent in the NBA where even the teams that are in the initial stages of their rebuild are still going to be worth flipping to on League Pass. There is so much intriguing young talent that even teams who may find themselves win win totals in the 20s and 30s are still going to be must watch. I can’t remember a time where that was the case, but a good example of that is the Memphis Grizzlies. Last season after trading away two franchise cornerstones they officially hit the reset button and moved on from the Grit & Grind Grizzlies they became famous for. They enter next season without any sort of real expectations in terms of team success, but instead have a new focus of developing numerous lottery picks in hopes they become the studs we all think they will. But before we dive into what you can expect from the 7th youngest team in the league, we first should relive what we saw last season

This next wave of Memphis Grizzlies basketball will largely revolve around their youth, but when you look at their roster you’ll notice a certain trend when it comes to the veterans they currently have 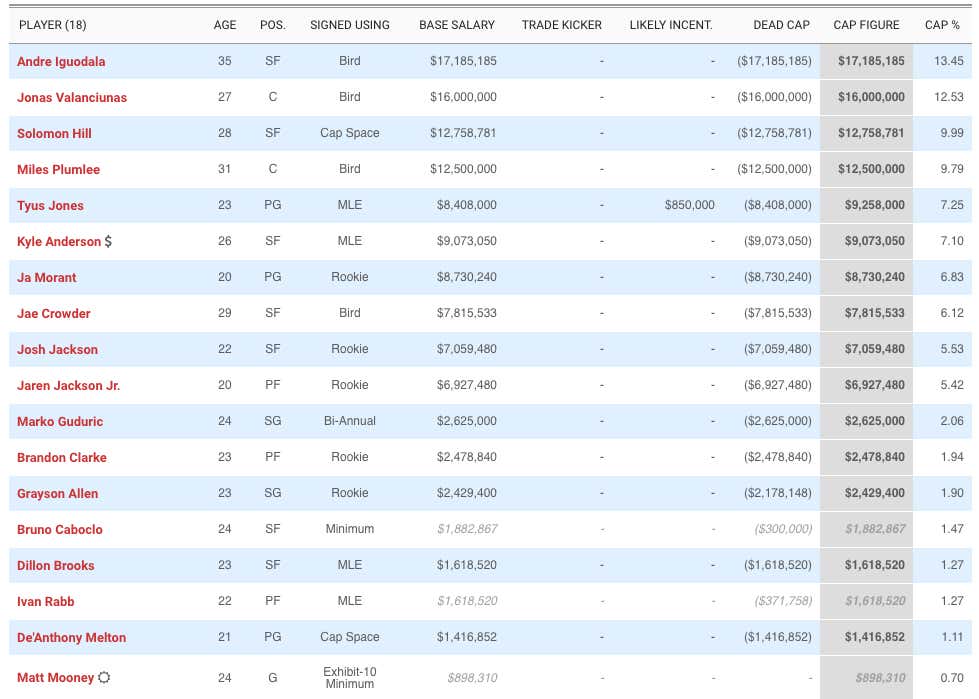 Iggy, Solomon Hill, Jae Crowder and Miles Plumlee are ALL on expiring deals who in theory could help a contender looking for some additional depth for next season while not committing long term years/money. That’s important for a rebuilding team because if they want, the Grizzlies can go the OKC route and start flipping these guys for future draft picks. If not, every one of their big salaries comes off the books next season, giving them cap space and young talent to build on, not bad! As of now their $127,735,472 salary is the 15th highest in the league, but my guess is we’ll see them make at least a few moves in the near future.

We saw the Grizzlies jump up to 33 wins last season from 22 the year before, but a large part of that was the fact that Mike Conley played 70 games, then they also got 53 from Gasol. Those guys are now gone, as is JaMychal Green and Garrett Temple. It’s fair to say given the conference they play in that the Grizzlies may have a tough go of it in terms of wins, but there are big reasons to be excited. First and foremost, Jaren Jackson Jr is a fucking stud

In his age 19 season JJJ started 56 of the 58 games he played in and put up 13.8/4.7/1.1 on 50/35% splits with just under 1.0 3PM a night. He was more than adequate on the defensive end and while his rebounding average may not be as high as you want, he did have a DREB% of 15.0% so it’s not like he can’t do it. Of all rookies that played at least 58 games, nobody had a lower Drtg. That’s a pretty good foundation to build on. His 22.8% usage rate (5th among rookies) is sure to go up this season as he becomes a focal point of what the Grizzlies do, and it’ll be interesting to see what type of Year 2 jump he makes on that end. He has a nice inside/outside mix, can get to the line relatively well at 33% of his possessions and the combo between him and Morant is going to be absolutely awesome to watch.

You look at JJJ’s shot distribution is screams 2019 NBA. He basically either lived around the rim (389 FGA) or behind the line (142 FGA). He’s a guy that only had 60 dunks on the season compared to 239 jumpers and showed the ability to be consistent to matter what quarter it was. His 54% in the first quarter compared to 51% in the fourth (44% from deep!) tells you that he is not a player who blows his load early and can’t show up late in games. He’s also at his best at the end of quarters, coming in at 63% in the last three minutes and a very respectable 49.5% in close games when the score is under 5. Everything we saw from him in his rookie year tells us that he’s poised to become one of the better young bigs in the league. It doesn’t hurt that he’s learning from a certain legend 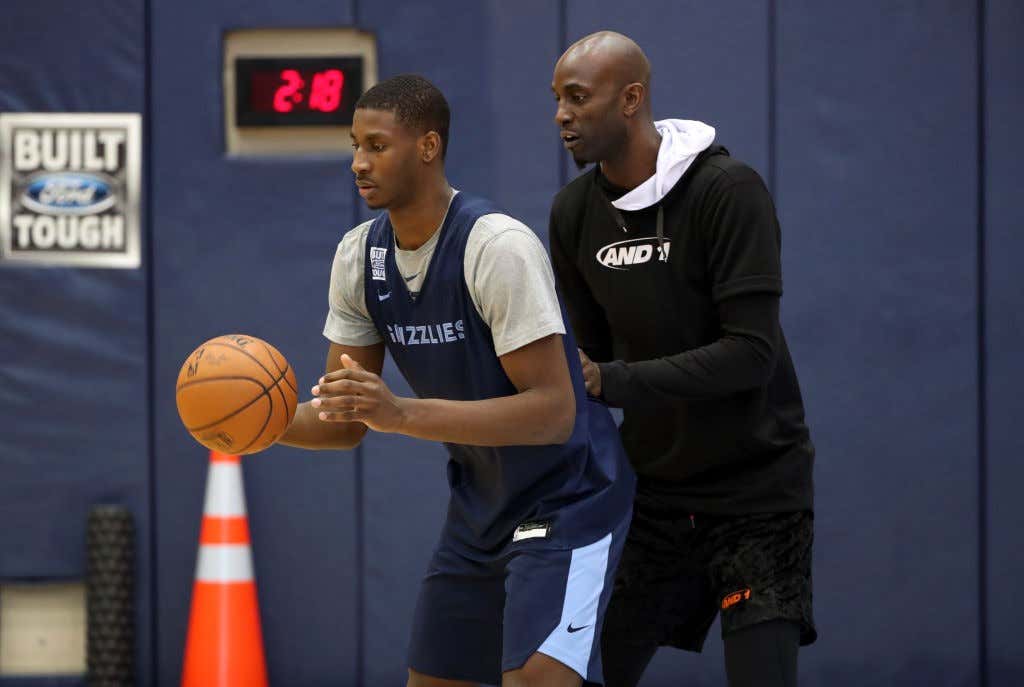 Pair that with this guy?

well now you’re cooking with gas. It was a bummer that Morant sat out during Summer League because he seems like another guy that’s going to be the real deal at the next level. The best playmaker in this year’s draft, he’s definitely more than just a dunker. It would have been fun to see him play againt some quasi-NBA level competition, and remember the Grizzlies did win the Summer League title because of another young stud draft pick from this past June

By all accounts based off what we’ve seen, Brandon Clarke is already being called the steal of this draft. I suppose winning Summer League MVP will do that. If you watched him this summer you saw a guy who reworked his jump shot and made you wonder why the hell he fell so far in this draft. Undersized or not, this dude can play. You combine this influx of young talent with some additional young free agents the Grizzlies brought in with Tyus Jones and Josh Jackson, and this team is loaded with lottery talent. If things go right, this could be a legit Western Conference team in just a few years. There are certainly worse spots to be in when it comes to a rebuild, that’s for sure.

With all this young exciting talent, it’ll be interesting to see how the Grizzlies evolve. For example, they were famously known for playing at the slowest pace in the league. Conley/Gasol wanted to kill you in the halfcourt. Well now with this new look I would imagine they are going to be playing faster which will be a nice change of pace. Considering they ranked 27th in offense it certainly can’t get much worse if they change their style a little to fit this new talent. I imagine we’ll still see them run a ton of P&R, they were the 3rd highest P&R frequency team last year in terms of roll man offense, and I can’t see that changing. They also led the league in passes per game, and are pretty much anti isolation, so it’ll be interesting to see how Morant fits into that system. This team LIVES in the paint, also led the league in paint touches, and that’ll be where JV does most of his damage. With so many young players it may be a stretch to assume this will again be a top 10 defense, especially if they trade guys like Iggy/Crowder down the line.

What they need to improve on is obviously their shooting. One of the worst teams in pull up shooting (29th in points), they shot just 37% in catch and shoot situations (35% from three). As a team MEM finished 27th in 3PM, 25th in 3PA, and 25th in 3P%. As we know, if you can’t shoot in this league you’re pretty much fucked, so someone is going to have to make a leap in that department.

There’s no doubt that the future is pretty damn bright for Memphis, even if they don’t get immediate returns. At this point you’re just looking for flashes. The young kids will make mistakes, they’ll lose a shit ton of games, but they have the foundation and are not bogged down by bad contracts. Those are the two hardest boxes to check in a franchise rebuild, and chances are this season is the worst this group will ever be. That’s pretty damn exciting.