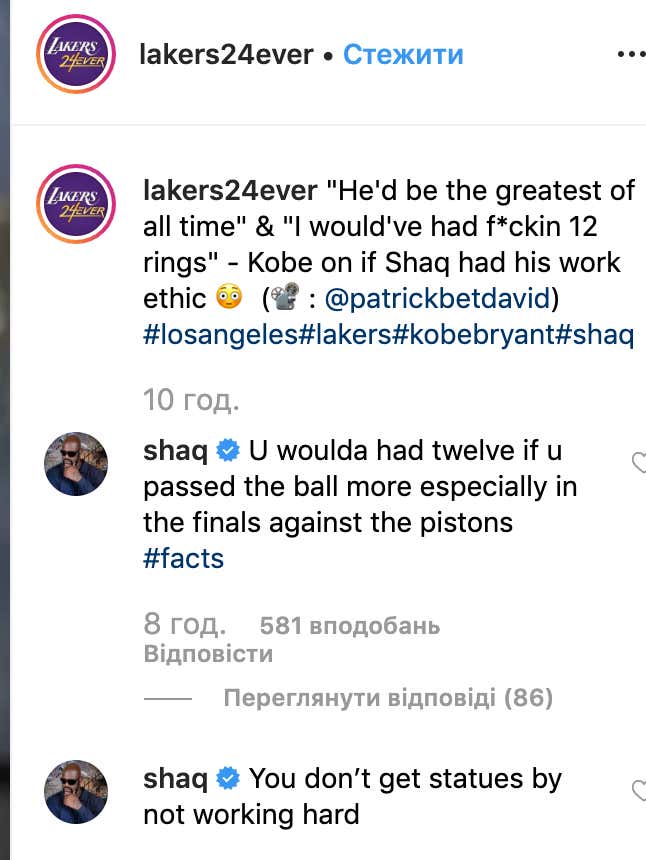 Ding, ding, ding. Shaq has entered the ring. I mean I can’t say I’m surprised that Shaq responded, I’m just more surprised he went to a weird Instagram account to do so. I need him to be screaming into a mic. I need him to bring back this:

We’re getting close to this and this is what I need in 2019. We’re all about nostalgia and NBA teams bringing back the 90s jerseys. Well bring back fighting and more importantly bring back Shaq asking Kobe how his ass tastes.

In case you missed it, this happened yesterday:

I said it yesterday and I’ll say it again. It’s a bold statement for a guy to say that after winning 3 with Shaq and then having to wait 7 years and having to get a prime Pau Gasol to win another one. And, yeah, I do think Shaq was more dominant than Kobe, so that makes it even funnier to hear Kobe always call out Shaq.

I do love Shaq firing back about the Pistons series. That was the one that really broke up the duo that could have won a couple more rings. There’s zero chance they win 12, but a couple more for sure.

Shaq was dominant in that series, because he’s Shaq. Kobe was forcing shots because as he notoriously once said, the Pistons made them play offense for 94 feet and took them out of their automatics.

All I know it’s 2019. Get these two in a room with a camera, mic and no editing. Let them go at it with a battle rap and perhaps a second fist fight. We’re getting closer just need one more thing to really set them over the edge.