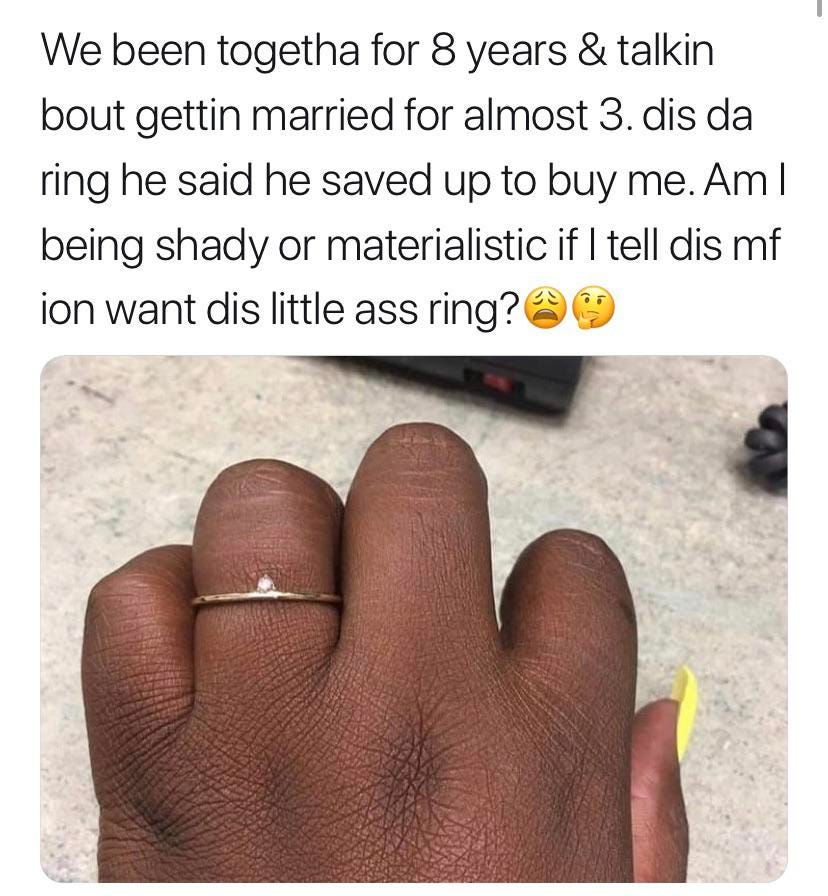 So someone posted this woman's engagement ring picture on Reddit yesterday and sent the internet into a tizzy. There were obviously two main sides of the argument:
1.) Who cares how big the diamond is and how much the ring costs? Love is love and you don't need a big ring to show it.
2.) This broke ass punk proposed with THAT? Call off the wedding now.

So I know that the wedding vows specify "for richer or for poorer", but I'm going to have to side with the girl on this one. For this guy to "save up" for this ring, I'm already hesitant about marrying him. What does this ring cost, $50? I'm not going to sit here and preach to you that you need to marry someone for their money (even though I would), but buying this ring for someone either shows a complete lack of money or a complete lack of effort. They've been talking about getting married for 3 years!!
If you're thinking about marrying someone for three years, I don't care if you're the CEO of Walmart or a greeter at Walmart, you can do a better job than this. I'm not even saying that you need to spend three months of your salary or whatever that bullshit rule is, but your ring should at least show that you care. Every single person in this country can either save up or find a way to make an extra $500 and you'll never convince me otherwise. A $500 ring would put this little dinky toy to shame.
Do not tell that to the internet though. This story was on Good Morning Britain and people came out of the woodwork to tell their beautiful love stories that started with rings from the quarter machines you find at an arcade.
https://twitter.com/markcatchlove/status/1166591048501608454
https://twitter.com/CarlBrian29/status/1166590638487494656
https://twitter.com/maxfieldv/status/1166599046443819011
Well let me congratulate you all for the most touching love stories, but you're not going to change my mind. This guy had to do better than this, especially because after 8 years of being together, he should've known that his girlfriend would want better. You have to know your audience. Some people might be okay with a $50 ring, but this woman clearly was not. You have to know that after spending damn near a decade in a relationship with her.
If I were to get married in today's day and age, I think the obvious move is to go ring shopping together. If there's even a 0.00001% chance she's going to say no, I'm not proposing. So as long as you're both on the same page that you want to get married, why not go pick out a ring together? That way she gets the ring she wants, and you don't have to sweat trying to pick out the right one.
Anyways, as much as I think the guy completely messed up here, let's not dismiss that the woman is an absolute psycho for taking this online. From what I've gathered about these two, I don't think this marriage is going to last very long…
I'd set the over/under at 0.5 days Basically, will they actually get married? I'll take the UNDER.