[Source] - “I watched the movie ‘Joe Dirt,’ and I was like, ‘Dang, I’d look great if I was an alpaca farmer with a mullet,’” Schlegel told the Courier Journal after a recent UK practice. “But then I’ve got a nice girlfriend that goes to the University of Iowa and she was like, ‘I’m not having the mullet.’”

Schlegel led Regis Jesuit High School to a state rugby championship, leading the state in tries — rugby’s closest equivalent to a touchdown — and earning the interest of professional and college teams. UK tight ends coach Vince Marrow claims Schlegel turned down a six-figure contract to play rugby in South Africa out of high school — “I said, ‘Dude, what is wrong with you?’” Marrow quipped. “’You could have come back and got your degree.’” — but the opportunity to follow his father’s footsteps at UK was too much for Schlegel to pass up. 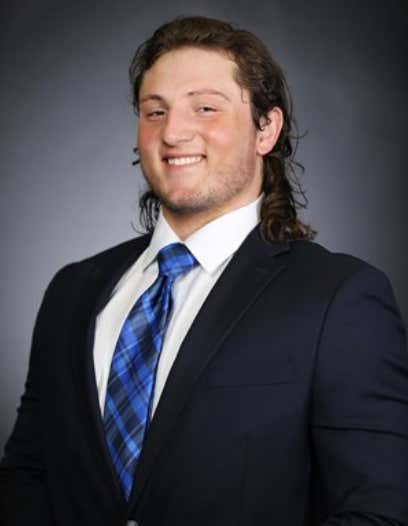 Absolutely glorious look. I mean it’s hard to argue. You watch Joe Dirt and you immediately think that’s a good looking guy. I can’t blame him. Would a bad looking guy bag someone like Brandy?

And this is just part of why he’s the early contender for fan favorite of the year. We got a little taste of college football last week, but we all know the season doesn’t actually start until Kentucky kicks off. I don’t make the rules, just talk about them. And there’s nothing better than the fact that Drew Schlegel is playing for Kentucky.

I mean the dude passed on a six-figure contract to play rugby in South Africa just so he could follow his dad’s footpath and play football at Kentucky. Six figures right out of high school! That’s nearly impossible to pass up, even if you have to go to South Africa.

I mean you could have had Donnie, Kate or PFT cover you instead of me. I can promise you that’s a win

And of course he went to Kentucky, not because of his father, but because he’s a basketball guy. Just when I think I couldn’t love him more I read this and immediately want to go to a bunch of mid-major games with the guy.

His life’s passion according to his media guide bio: mid-major conference basketball.

“I’ve been to alpaca farms in Colorado,” he said. “I got to all the alpaca shows in Denver. I love seeing all the alpacas, so I’m like, ‘I’m going to live in the mountains when I’m older and be an alpaca farmer.’”

Between him and Kash Daniel, UK might have the two most entertaining players in the country. They also might have the best future WWE Tag Team. Need these two to join together and immediately join the WWE after college.

The transformation from no mullet to mullet is beautiful.

Seeing the mullet makes me want to say this team wins 10 again instead of 9.