It hasn't been an easy 48 hours. I 100% sound dramatic but it feels like there's still a knife in my gut. It was just one of the most unexpected news that's happened in sports. I want to start by saying Andrew owes nothing to anybody. What he has done for the city of Indianapolis will always be remembered and cherished.

The Colts drafted this guy after a 2-14 season led by Curtis Painter (after Manning went down), a QB that Caleb could probably out throw. Andrew took the Colts to 3 straight 11-5 seasons and to the playoffs between 2012-2014. During these years, a man named Ryan Grigson was drafting random players and not focusing on building around the face of the franchise. Andrew also had the wrong coaching staff with him for the first 6 years. This led to Luck turning into a human punching bad, resulting in week by week injuries, season ending injuries, and now the end of a legacy.

I remember all of these NFL Insiders and analysts every year saying "I fear for Andrews career" or "I don't see him playing any longer" and it was hard to believe because of the competitiveness Andrew had. He never threw fits; he just went out and played his heart out. In the words (and voice) of Coach Pagano, "Andrew had grit". You could tell how much Andrew loved playing football and how he put himself first before his health. It's a great mentality to have for a season, but not for a career.

I've read all the news, I teared up not because he was someone I grew up on, but someone that I got to know and work with. It's very easy to get angry at an athlete you depend on once a week, whether it's for your passion of the team or for a fantasy league. But it can be more of an emotional aspect when you get a feel of an athlete's presence. And I'm not here saying, "Yeah I know Andrew" I'm saying this because I can slightly understand how much weight he's had on his body (not going to say shoulder because he's gone through enough of that). The city loves Andrew, players and coaches in the NFL loves Andrew, it's hard not to love him.

All the fans booing him, lighting his jersey on fire should be ashamed. Sure, the timing was horrible. Preseason game 3 on a Saturday night is not the most normal time to announce retirement, but don't tell Vontae Davis that. We can blame Schefter on this announcement that was supposed to be the next day.

It's one thing to go after the front office for how they handled Andrews career, but going after human's decision when we have all witnessed his pain is disrespectful. I made a rant about the breaking news and seemed upset at him, but I was just upset that this was actually happening. There are people who are genuinely upset at Andrew. What the hell? He's a 29-year-old young man who has a family on the way and after this press conference, he knows he can't play.

Considering he's had shoulder surgery, a lacerated kidney, was pissing blood at one point, and a concussion, he's lucky to be walking! Look at Antwan Randle El. He's 40 and can barely walk down the stairs and is losing memory. The last person I need to think about going through that phase is Andrew, or respectfully any player.

I stand by Andrew's retirement, but I just can't accept it at the moment. The 5 stages of grief is real. The man has done so much for Riley Hospital, the Children's museum, the community, and for the fans it's just heartbreaking to see a class act's story end like this. There are not many professional athletes that have racked up $100+ million dollars and spent their signing bonus on a table tennis simulator.

If there were more personalities in the NFL (or any sport) like Andrew, the world would be a better place. And a lot nerdier. In conclusion, nobody died this weekend. But hearts are shattered for #12. 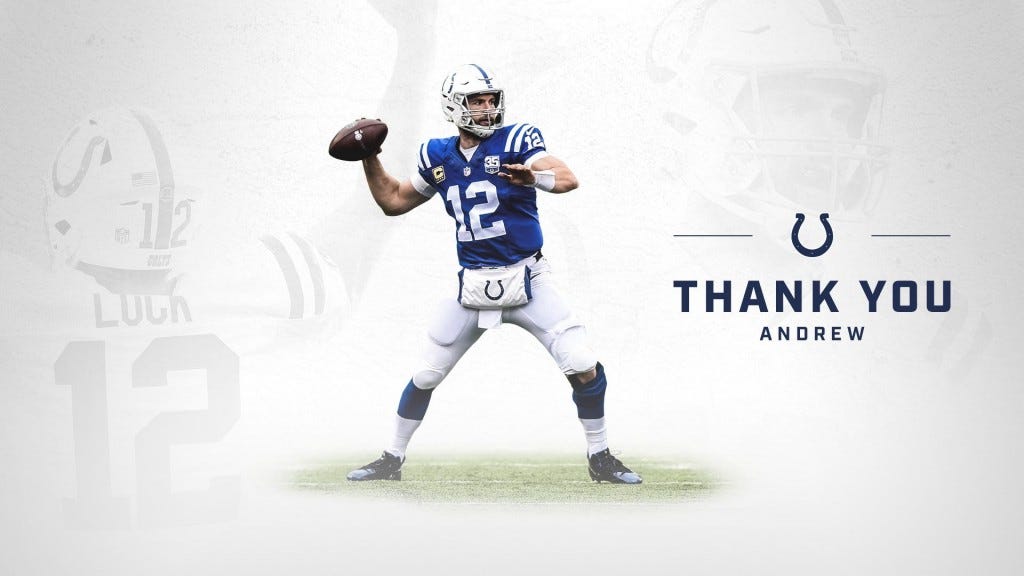 With that being said, it's next man up. The state of Indiana is all out of Luck Burgers and will now be grilling Jacoby Briskets all year long!

It was reported that Brissett was already informed about the news, but this still an all-time introduction to learn you are the new QB in the middle of the 4th quarter. But have no fear, 2 days after this Seinfeld moment, the Brisket is already getting seasoned.

Brissett To T.Y. is the new wave (as the kids say these days). Over the weekend, it seemed like people forgot Jacoby was basically (did not start game 1) the starting quarterback of the 2017 season. For someone that was traded from the Patriots as a third string QB, had to play behind a poor o line, below average defense, and underwhelming coaching staff, Jacoby proved he had some capability of being a starting QB.

In 2017, Jacoby threw for 3,098 yards, 13 TD's, 7 INTS, and was sacked FIFTY TWO TIMES! Saying the o line was poor may have been gracious to say. For what he had, he didn't have that bad of a stat sheet. His biggest problem was that he hesitated too much. He stayed in the pocket too long and really wasn't that consistent of a thrower. He has a hell of an arm and can launch it, but he didn't seem too confident on the field. But then again, if you're going to get sacked 52 times in a year and 10 times against the Jaguars in 2017, you'd be lucky to have one second after the ball is snapped to breath.

I actually can't believe Swag Kelly is going to be the backup quarterback of the Indianapolis Colts. Considering we are out of Luck, I wonder if Ballard will bring some magic back into the locker room and trade for Ryan Fitzpatrick. But I think we already have QB3 lined up.

Jacoby has one more week until the grill is fired up to 450 and the Brisket will be ready to grill all year long. This is going to be the most unpredictable season, but most entertaining for sure. Great coaches, 2 All Pro's that were rookies last year, and the G.O.A.T Adam Vinatieri will be accompanying #7. From Tweeter To Leader, Jacoby is once again the face of the franchise. Go Horse.