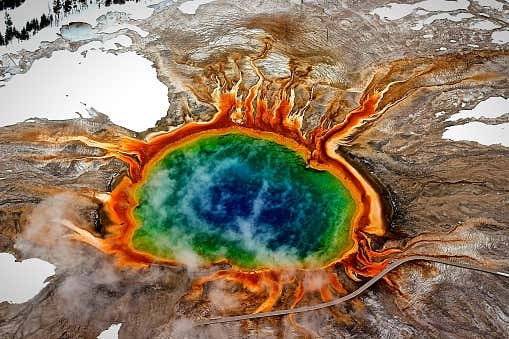 (NYT) – The Yellowstone supervolcano — an 8 out of 8 on the Volcanic Explosivity Index — has erupted three times over the past 2.1 million years, most recently 640,000 years ago. A Yellowstone eruption would be like nothing humanity has ever experienced.

First would come increasingly intense earthquakes, a sign that magma beneath Yellowstone was rushing toward the surface. Then magma would burst through the ground in a titanic eruption, discharging the toxic innards of the earth to the air. It would continue for days, burying Yellowstone in lava within a 40-mile radius.

A bad day at the park. But the devastation around Yellowstone would be just the beginning. Volcanologists believe a Yellowstone supereruption would bury large swaths of Colorado, Wyoming and Utah in up to three feet of toxic volcanic ash. Depending on the weather patterns, much of the Midwest would receive a few inches, too, plunging the region into darkness. Even the coasts — where a majority of Americans live — would most likely see a dusting as the ash cloud spread. Crops would be destroyed; pastureland would be contaminated. Power lines and electrical transformers would be ruined, potentially knocking out much of the grid.

Anyone who’s anyone in the volcano game has long known about Yellowstone National Park. About how if it were ever to erupt in modern times there would be some sort of “mass extinction event” and that “the Sun would be blocked out by the never-ending skies of ash” leading to “an eternal darkness of which no life – neither plant nor human based – could survive.” And I don’t know about you guys, but frankly I’m tired of this bully constantly holding this threat over our heads. Like alright we get it the big bad lava mountain might throw up some day and kill us all for no reason whatsoever. This isn’t an Antarctica situation where we could probably step in. I don’t think there’s a really heavy lid we’re refusing to invent which could stop such an eruption from happening. If there is then this is even less of a story. But it’s not.

Some day the park which was used as the impetus behind the beloved Yogi Bear cartoon will be our untimely demise. Our crops will wither, our air will be contaminated, and nocturnal creatures’ sleeping schedules will likely never recover. I don’t know what we’re supposed to do with this information that keeps getting shoveled onto our plates. But if it’s such a goddamn inevitability then just blow already, coward. Do it. You wont do it. I know you wont. Ol’ Dwyane Wade pump faking from the perimeter ass supervolcano. Either melt my face off on the pronto or stay in your lane of geysers and picnic-basket thieving bears, bucko.