NFL Hall-of-Fame kicker Morten Andersen appeared on today’s Pardon My Take and told an awesome story about what it takes to be one of the best to ever do it. His journey shows the drive that athletes, even at the kicker position, must have to be successful and to always be ready for what could be next.

“So, 2004, I’m with the Vikings. I have a good year; I think I missed two field goals all year. I’m thinking I might be back with the Vikings, I might not. But my wife and kids are in Atlanta. Let me see if I can sell myself on them. I’m thinking the phone is going to ring right away. Phone doesn’t ring, it doesn’t ring for two months, it doesn’t ring for 20 months, So, now 2005 I don't play and I'm sitting there, and the guys are missing left and right. I can't believe I can't get a call, but I'm ready. You know I'm ready just in case somebody calls you to come in and do the thing. So now we're in 2006. I'm a year older. I'm 46 now.”

You ever find yourself sitting on the couch, cracking open a cold one, shoving down some wings and think “WTF, I could do better than that!” when a guy screws up on the field? Well, that’s exactly what Morten Andersen dealt with for nearly two years. I mean, the disrespect each and every team is giving this man.

He was already more than two decades into a stellar NFL career as a kicker with five different teams, but nobody wanted to pull the trigger. Yet, the 2017 Hall-of-Fame inductee refused to give up hope.

"I'm sitting in my basement with my neighbor Eric and we're watching the Falcons play the Bucs. The guy from the Falcons is having a really shitty day. He missed four field goals inside of 40 yards. I turned to Eric at that point, my neighbor, and I said, ‘Hey I'm switching to water.’”
“Why man?”
“The phone's going to ring 20 minutes after this game is over. And he said bullshit! It hasn't rung in 20 months.”

“I said, we’ll see…. Well, the fuckin phone rang, it rang right after the game.”

The next thing you know, Andersen is on the phone with the Falcons and was offered a 9:00 AM workout. But after a long day drinking and watching games, he bought himself a few extra hours to hydrate, so 2:00 PM it was.

Baller move by him. Imagine having your big final exam at a certain time and negotiating with your professor to buy yourself a few extra hours of study time (which probably won’t be used for studying). Anyways, onward with the story… 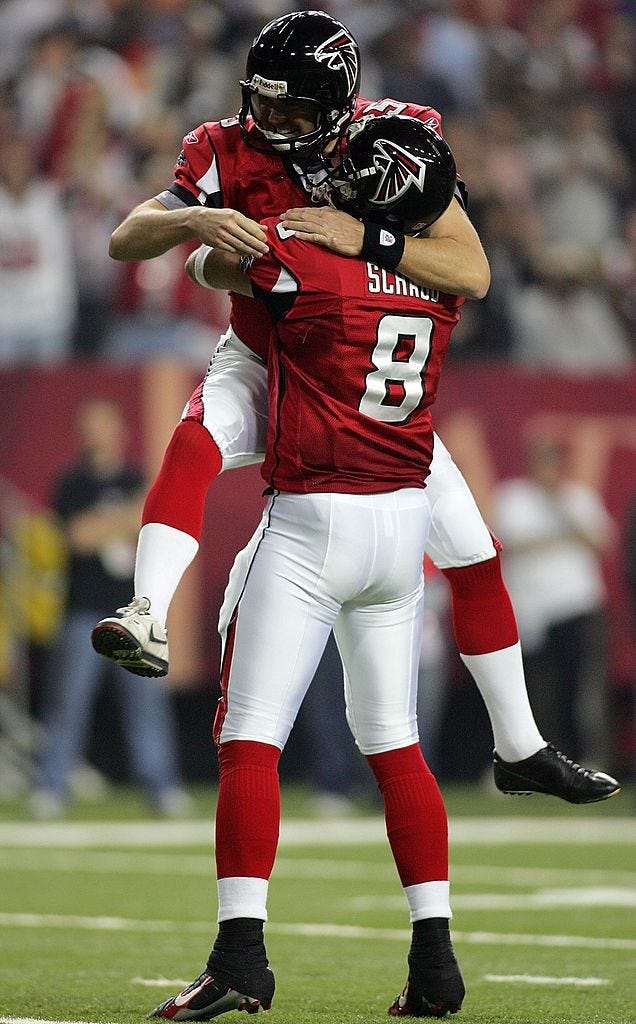 “So, I think it’s just me and they want to see if the leg is still attached to the hip. It’s not. It’s me and four flat bellies half my age! They’re 23, 22, right out of college. I’m 46 and I’ve been grinding 20 months in a public park. Now let me set the stage and the humility that I was going through for those 20 months. Imagine wearing your Pro Bowl jersey, and I had seven of them at that time, to a public park. I had Kenny Stabler shoulder pads. I had a Saints helmet, I had Giants pants from 2001 because I always practice like I wanted to play. Wear the shit you're going to wear in the game, wear it in practice. So, I'm out at George Pierce Park in this outfit and I would have to defer the field to the little leaguers and their parents when they needed the field. I would have to bribe the county workers to cut the grass. So that was my mentality for 20 months. That's the backstory on it.”

Just unbelievable. It’s a Saturday morning after your U12 little league game, you played well but that little schmuck Timmy at the end of the bench cost you guys the game after striking out thanks to that “everyone must get at least one at-bat rule.” What an awful idea!

The next thing you know, the man taking over the grass part of the field is a freaking seven-time Pro Bowler?! And the fact that he’s practicing in his NFL gear just makes the whole thing even better.

As a wise man once said: “Very cool!” 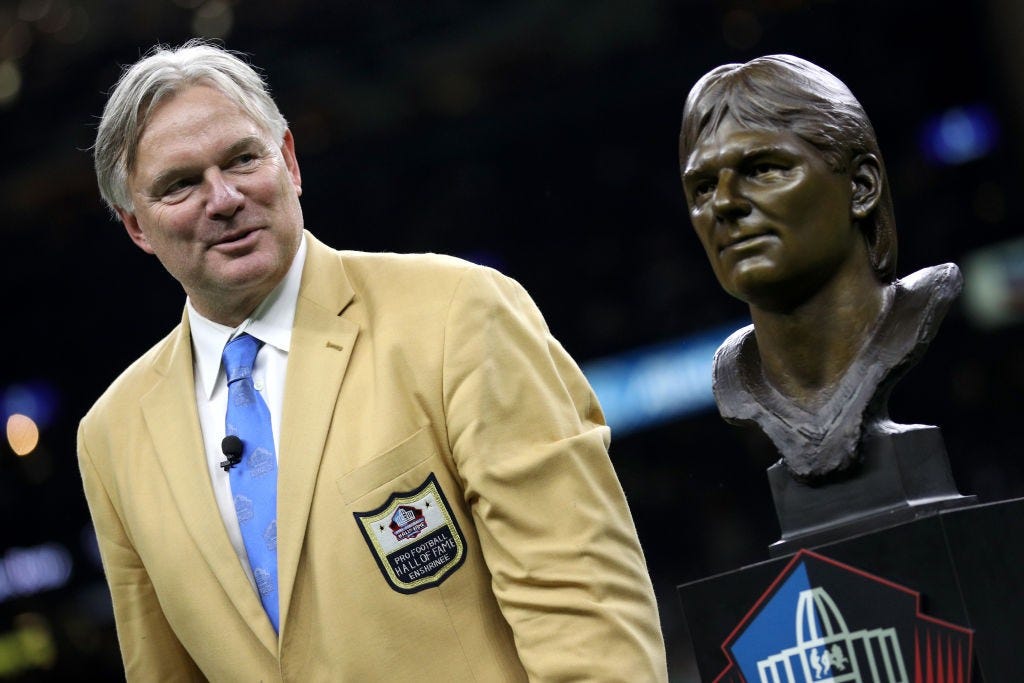 “Now I'm ready. I'm totally ready to go and very motivated. By the way, I’m 77 points away from becoming the all-time leading scorer in the history of the game. So, I go out there at 2 o'clock for the workout and here are these four flat bellies half my age and it was mano a mano. We hit 15 balls. There was an orange stripe on the net between the uprights. It signals the middle. Never changes. Hit 14 of 15 on the stripe, the 15th kind of grazed, but goes through. So I feel pretty good. I turn around, everybody’s standing there. Coach Morris, Rich McKay, a bunch of scouts, and I could see the four flat bellies kind of got discouraged (exit right)."
“I turned around and said, questions anyone? And my Special Teams coach, Joe DeCamillis goes, ‘Yeah, I have one question…’”

And just like that, Morten Andersen is back in Atlanta, back in black and red, and back chasing his goal to get to the top.

Three months later, that’s exactly what he did. The Danish-American knocked through an extra point vs. the Cowboys which allowed him to become the all-time leading scorer in the history of the game.