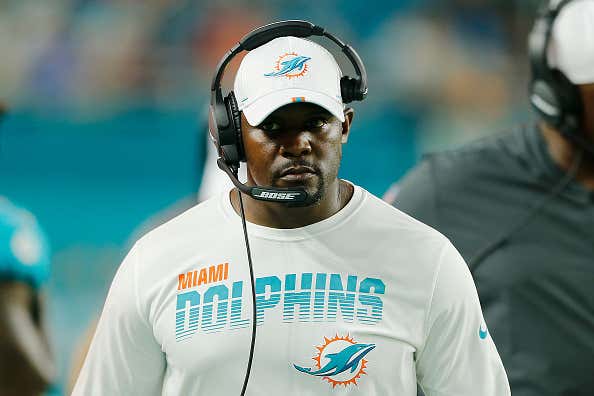 So you know that statement Kenny Stills made the other day, ripping into Jay-Z for taking massive amounts of the NFL’s money in order to make the National Anthem problem go away?

Yeah, it seems like Brian Flores got the last word on that:

I have no way of knowing if Brian Flores likes Jay-Z’s music or not. For all I know he’s into Broadway or Yacht Rock or Five Finger Death Punch. What I do know is that no one controls Brian Flores’ music at Brian Flores’ practices unless Brian Flores says they can.

He learned a lot of things at the side of the Master of Practice during his time in Foxboro. And one of those things is “Music is Power.” He who controls the playlist controls the world. He sets the tempo in a literal sense. That’s why his former boss mainly plays Bon Jovi to Springsteen and everything in between. His tastes run the whole musical gamut, from A to B. His dojo, his rules.

So it doesn’t matter whether Flores likes the songs he selected or not. The important thing is that he showed Kenny Stills, his players, his staff and the world that he’s the one in charge. And if some player wants to try to go rogue and weigh in on some socio-political issue, he’ll swing his dick around and show them who’s boss. It’s not about music. It’s about power. And on the football practice field, they are one in the same.

The Dolphins will suck this year but I have no doubt about the brilliant coaching future that lies ahead for this man.