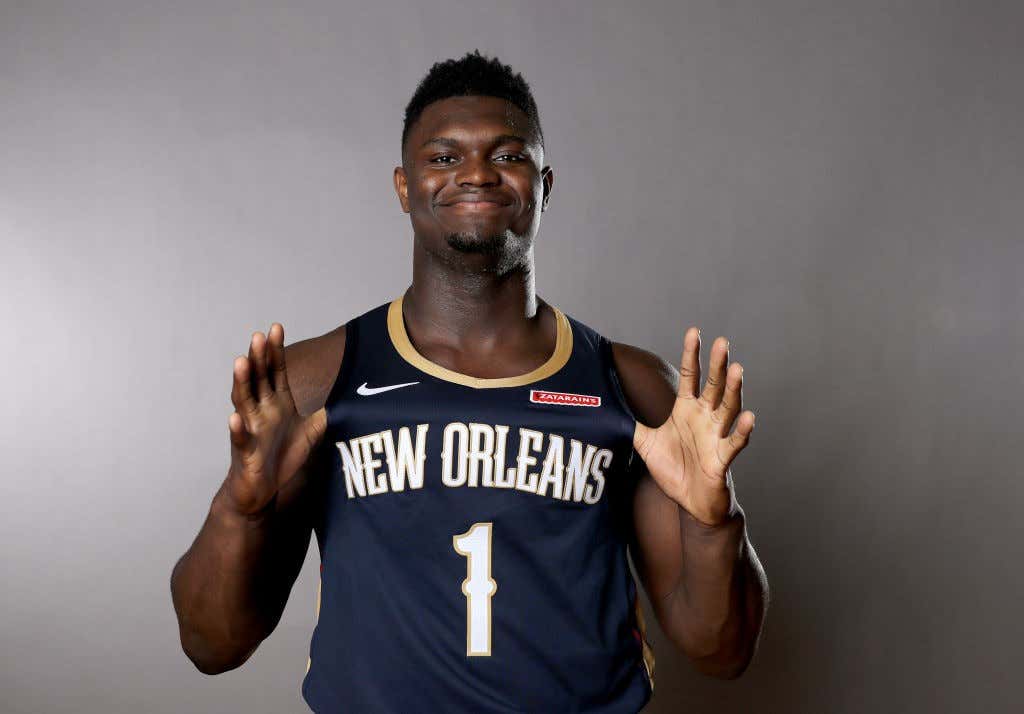 Simply put, the Pelicans are fascinating. Their 2018-19 season was what I would best describe as a season from hell, one that started with such promise after an encouraging 2018 season, and quickly turned into one of the biggest dumpster fires in the NBA because their franchise player decided to be a gigantic dickhead and blew it all up from the inside. From about January on, this team was nothing about losses and drama, two things that usually go hand in hand and more times than not end up in complete disaster. That’s where the Pelicans story gets interesting. If you think of all the franchises that had to lose their franchise player and perhaps the best player in franchise history, they are usually left in ruins. But with a new GM in David Griffin, he assembled one of the most impressive rebuilds in recent memory and is living proof of someone who made chicken salad out of chicken shit. The Pelicans are now entering a new phase, one filled with actual hope, and it makes for one of the more intriguing teams of the 2018-19 season

See this was tough because none of those highlights mean anything right now outside of Jrue Holiday given how different the roster looks. Now what you think of this team certainly depends on what you thought of the Lakers core before the trade. Brandon Ingram showed flashes but we have no idea if he truly can be that #1 type scorer, something the Pelicans are going to have to decide real quick considering he’s a RFA this year. Lonzo Ball can’t shoot to save his life and was always hurt, but he’s a fantastic passer and a legit as hell as an individual defender. Josh Hart is a very serviceable reserve guard who you can feel comfortable playing if you have to cover injuries. You look at their roster, and this is where we stand as of today 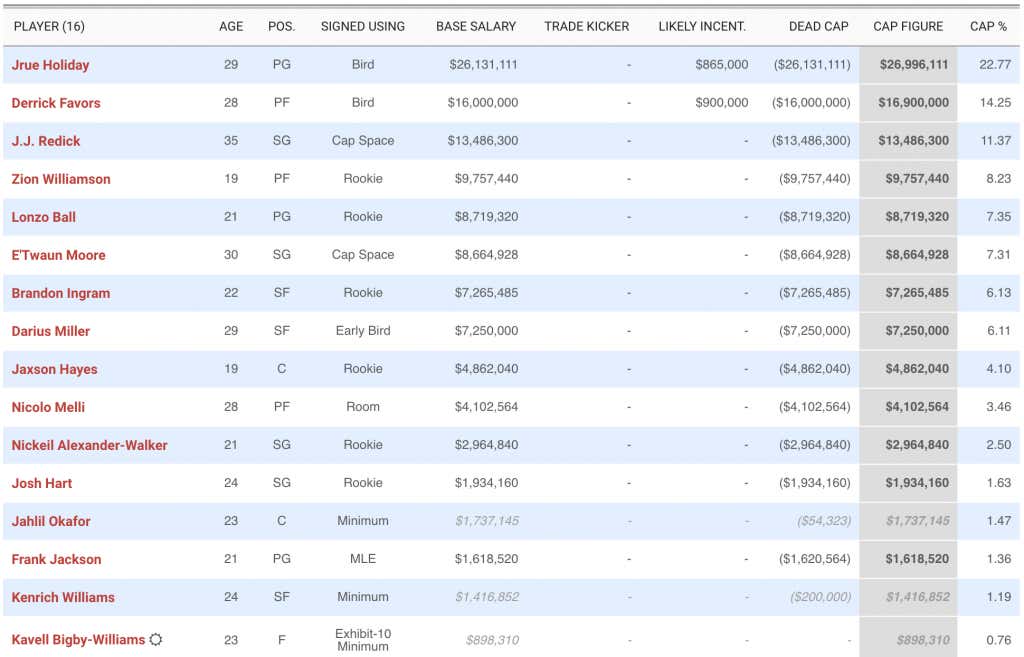 Ah, the beauty of a team mostly made up of rookie deals. At a total of just $118,574,015 the Pelicans have the 22nd most expensive roster in the league It’s pretty clear what Grififn’s strategy was when he was tasked with retooling this team. Get good young promising talent on cost controlled contracts and a shit ton of picks so you can take as many swings as it takes in hopes of hitting on someone. Now it helps when the NBA 100% cheats for you in the lottery and you land Zion, but his work pulling off that trade with Atlanta to land Jaxon Hayes shouldn’t be ignored. That’s a guy who balled out in Summer League and could help make the NO front court one of the most exciting pairing in the league.

I also can’t stress this enough, do not sleep on Jrue Holiday. He’s an All Star caliber talent and one of the best two way players in the NBA. It’ll be interesting to see how they handle him and Lonzo together seeing as how Lonzo is most effective with the ball in his hands, because as of now Holiday is a 37% shooter in catch and shoot situations. If you think of their potential lineups and how much attention guys like Zion and a healthy Brandon Ingram will command, Holiday could very well be that steady offensive scorer they need. The question though is just how healthy Brandon Ingram is. You absolutely cannot fuck with blood clots but my guess is the Pelicans did their due diligence when the AD trade went down so I’m going to assume he’s good to go.

When you have a team filled with kids, a tremendous open court passer and one of the best finishers my eyeballs have ever seen, it’s clear the Pelicans are going to play fast as hell. Last year we saw them play at a pace of 103.89 which was the 2nd fastest in the league and my guess is it only gets faster. It can’t get much worse in term of transition scoring considering the Pelicans ranked in the 3rd percentile last year, but something tells me that’s about to change in a big way. It’ll be interesting to see what this team looks like on the defensive end, because while guys like Lonzo/Hart are serviceable defenders the old Lakers team defense stunk out loud and while Holiday is no joke, this is also going to be a team that gives heavy minutes to rookies and history tells us rookies don’t always thrive on that end. That means they’re going to have to score a shit ton and what better way to do that than get out in transition. Use your youth to your advantage and run teams into the ground. This was a team that was 22nd in defense last year and in my opinion it’s their biggest issue approaching next season.

Outside of the AD trade and their solid draft, this team also did pretty damn well in the free agent market, starting with JJ Redick. What’s the best way to ensure you’re creating as much space as possible for Zion? Surround him with shooting. The Pelicans certainly need it ranking 22nd in threes last year, and when you look at what Redick did for Embiid/Simmons in terms of creating space so they could go to work, he’s a guy who could make a real difference and is absolutely not showing his age, coming off perhaps the best season of his career. A disaster defensively, there’s no way around that, but you aren’t brining Redick in for defense. You’re bringing him in to knock down threes, come off screens, and keep defenses honest. In addition to Redick, while it may not have gotten the publicity as some other free agent moves, Derrick Favors was a really good get for Griffin as well. Maybe Okafor continues to show he’s an actual living breathing basketball player as well, and then there’s also the hyped Nickeil Alexander-Walker who is a nice depth piece as a rookie. Basically everywhere you look on this roster it’s filled with high upside young talent and established consistent good veterans. An awesome reload, no doubt.

But let’s not kid ourselves. Everything comes down to Zion. If he’s the star we all think he’ll be and the Pelicans are certainly hoping he is, that’s the difference maker. It’s not all that often you can go from one generational talent in Davis to another in Zion, and it really sucks we didn’t see him play more than 9 minutes in Summer League. He certainly has his questions, we don’t know how reliable that jumper will be or if it will even matter. His weight and conditioning may be a factor, but something tells me a guy like this is going to figure it out

I’m excited to see how Gentry unleashes this beast. The Pelicans ranked in the 72nd percentile in P&R last year and the 86th percentile in post up situation which was 5th in the league. I can see Zion flourishing in those areas for sure.

To me the Pelicans are going to be one of those teams who play really hard, make a ton of mistakes and while they may not win all that much given the conference they play in, they are going to be well worth your time. Zion alone should make them a League Pass regular, think the Atlanta Hawks of last season. All I know is other teams in the Pelicans position usually sink to the bottom of the league and are a situation you avoid at all costs after losing their best players, but there’s real hope right now for Pelicans fans, and after the year they just had they sure as shit deserve it.