This weekend just past was supposed to be the dates of Woodstock 50, to commemorate the 50th anniversary of the original Woodstock, that defining moment for the Baby Boomer generation that they’ve spent half a century claiming changed the course of world history.

I say “supposed to,” because the entire reunion concert was canceled, despite the fact the same organizers who put on the original had five decades to work out the details of this one. Rolling Stone has a piece on what went wrong to cause the plug to be pulled on this particular reboot. tl;dr. But suffice to say that my takeaway is “Woodstock: The Generation After the Next Generation” never made it past the planning stage because, unlike 1969, we are no longer fucking idiots:

Woodstock 50 turned into a slow-moving train wreck. … It’s the story of how the Age of Aquarius turned into the Age of Mercury in Retrograde — and the unfulfilled promises left in its wake.

“You can’t ‘magic’ one of these [Woodstocks] into happening, and that’s what they tried to do with this,” says David Crosby, one of the veterans of the first Woodstock who was booked for the anniversary festival. “It had nothing to do with anybody feeling good about each other. It had to do with certain people making a huge amount of money. That’s a grubby way to start in the first place. It’s not a motivation that brings out the very best in people.” …

From the beginning, Lang wanted nothing less than an all-star lineup for Woodstock 50’s headlining acts. … At the hypothetical top were Beyoncé and Bruce Springsteen, along with “Drake (or Kendrick Lamar),” Bruno Mars (whom they earmarked for a “special Sly and the Family Stone tribute”), “Lady Gaga (or Pink or Katy Perry),” and finally “Stevie Wonder + Friends” (whom they suggested would pay tribute to Aretha Franklin and bring “his Hall of Fame friends to join him [for] a one-time-only W50 set”). Other hoped-for performances that never materialized included Green Day playing all of American Idiot, My Morning Jacket performing a “special tribute to the Band,” and, as Lang told Rolling Stone, a collaboration between Miley Cyrus and the Grateful Dead’s Bob Weir. …

Knowing the near-chaos that had happened at the 1969 festival, New York state subsequently enacted a series of new regulations for festivals. By the time of Woodstock 50, those requirements were immense — the organizers would have needed to construct new roads and bridges, lease extra land for parking, expand water systems, and create an entire backup water supply, the latter required by the Department of Health.

I’m not the world’s biggest advocate for the exercise of massive government power to interfere with people’s personal freedoms. Unless that massive government power shuts down hundreds of thousands of people getting all personally free in a field someplace. Then I’m all for it. Especially when said hundreds of thousands of people happen to be smelly hippies, like they were in ’69 and no doubt would’ve been this time. Only some of them would have 50 more years of smelly hippieness on their resumes.

By way of full disclosure, I was technically born at the tail end of the Baby Boom. (A narrow demographic I’ve heard called “The Baby Bunchers” because we all grew up with “The Brady Bunch.” I don’t reject the premise.) But without a doubt, The Hippies was always my most hated archetype.

When I was in college I took a Speech class. And a really nice older woman was in the class. Old enough to do a speech about her first hand experiences at the original Woodstock. The speech included a video from a documentary about the concert. And even though I was at that age where I was supposed to be buying into that Free Love, drugs and sex in a field lifestyle, I found myself sympathizing with this old guy with a flattop haircut bitching about these punk kids cutting through his property and sleeping the mud. As a matter of fact, it occurred to me that if there was a personal Hell on this Earth for me, it would be getting stuck in the middle of that dairy farm in mid-August, 1969. Surrounded by dirty slobs in filthy denim, high as lab rats and two hours away from the nearest clean bathroom.

From an article about the real Woodstock on History.com:

On Sunday afternoon, for example, a brutal thunderstorm swept in. Porter saw the ominous dark clouds amassing and made for the makeshift vender booths in the woods known as Bindy’s Bazaar. There, huddled under a tarp with dozens of other storm refugees, he watched the carnage unfold.

“I had a view of the field and I couldn’t believe what I was seeing,” says Porter. “Waves and waves of torrential water hitting hundreds of thousands of people who had nowhere to go. It was pathetic. ‘Drowned rats’ doesn’t even come close to describing it.”

Eisenstein was one of those drowned rats, soaked to the bone under a useless sleeping bag in an open field between two large metal towers. The brief but violent deluge reduced her section of the cow pasture to a sea of mud.

“It was a quagmire,” says Eisenstein. “It sucked your shoes off. It was not only mud, but cow manure and it was so dark it looked like chocolate syrup.”

Also, this is what all that Peace and Love and Going Green left behind once the music stopped: 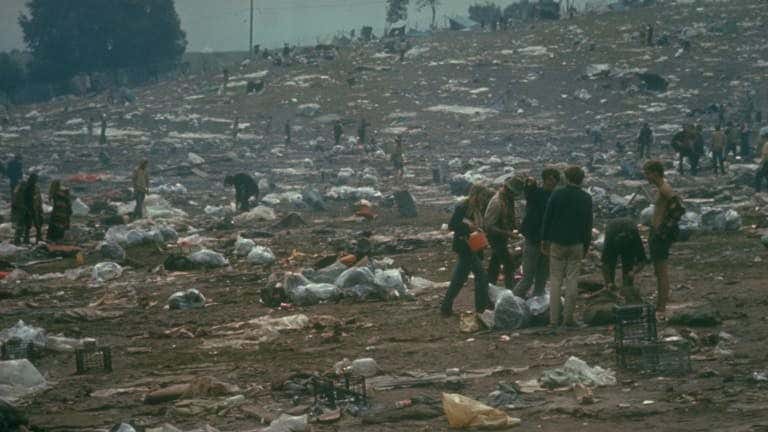 Hard. Pass. Any sane, rational adult would’ve noped the Hell out of there the minute they came over the hill and saw 400,000 acid heads. Or heard the music of Sha-Na-Na, who actually played there, for those of you who think it was all Hendrix doing “The National Anthem” on his Fender Stratocaster. And yet for half a century now, the people who were there have been congratulating themselves for saving the world. When all they actually did was get fucked up for three days at what had to be the worst cultural event in U.S. history.

So thanks, government of New York state. You did the work of the angels on this.