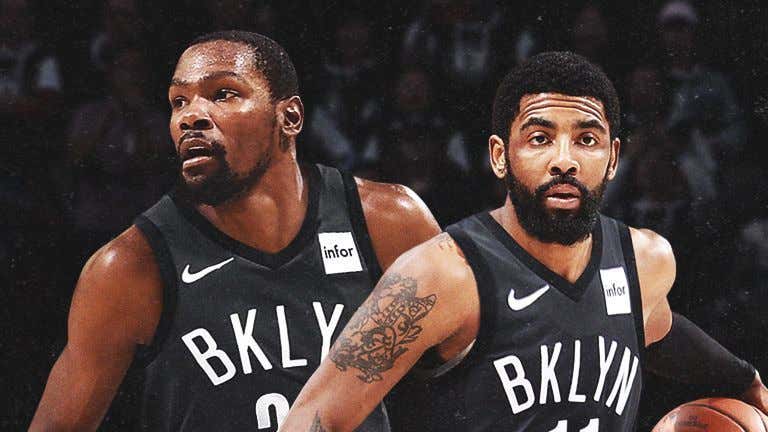 In terms of rebuilds, the Brooklyn Nets have been pretty damn impressive. Remember, it was just four years ago this team won 21 games, followed that up with a stellar 20 win season and then really took a leap in 2017-18 and won 28 games. All along the way they were rebuilding their front office, inserted a new coach, and started accumulating high character and high energy talent which are the exact type of guys you want to bring in during a rebuild. All that work looked to be paying off last season when the Nets came out of nowhere and won 42 games and made the playoffs for the first time in three years. While they weren’t world beaters, they played hard and did a great job against the best of the best in the league. Somehow they had the most wins of any team in the conference in games decided by 3 points or less with 12. D’Angelo Russell broke out and became an All Star, and suddenly the narrative around this group changed. Little did their fans know, this was only the beginning.

We knew all year that the Nets had cap space to be a player in free agency for one max guy. Then we got to the beginning of summer and they traded Allen Crabbe to Atlanta which suddenly opened up a total of $46M. Forget one max guy, this team now had two max slots open and the rumors intensified that something massive was on the horizon. As we now know, that Woj bomb was the signings of both Kevin Durant and Kyrie Irving. While Kyrie had been rumored to BKN for basically the last few months of the regular season, obviously KD was the surprise. The Nets clearly didn’t give a shit that he tore his achilles because when you have a chance to bring together elite talents like that you have to do it. After all, you are the Brooklyn Nets, not exactly a free agent destination. If you look at their roster now, even without Durant for the year, this team is deep as hell with legit talent. 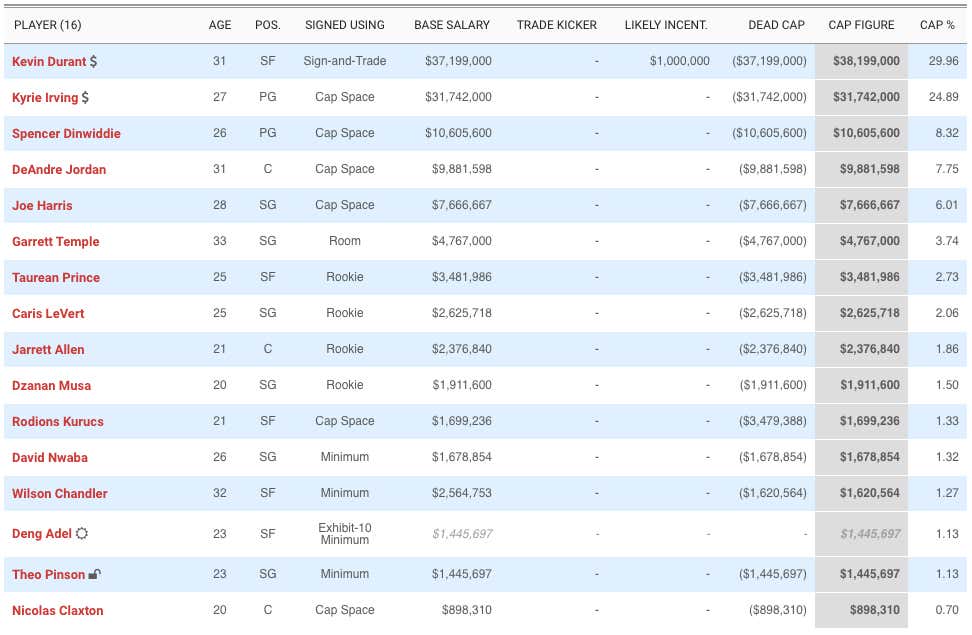 All in all their salary cap number of $127,521,154 is only the 16th highest salary in the league. They have a good amount of room before they hit the luxury tax, and look for yourself, there aren’t a lot of holes. They have elite high end talent, solid role players, elite rebounding and rim protection, shooting, a ton of guys on cost controlled rookie contracts, compare this to their roster just a few years ago and it’s an entirely different team. Obviously they truly take a leap if Durant comes back and is the Durant we’re used to, but for the sake of next season in a wide open East, why couldn’t this team flirt with 50 wins?

To get there, we’ll have to see a couple things. First, how Kyrie meshes. I have some good news for Nets fans when it comes to Kyrie Irving, and that is Year 1 is going to fucking rule. I’ve lived it. Even if I now hate him like poison for everything that went down last year, I have eyeballs. What he did on the court in Boston was some of the best basketball of his career. He’s going to come into BKN and continue that trend, and really be a perfect teammate in that first year. Watching him play is exciting as hell, he’s a true basketball wizard and when he’s locked in he becomes one of the most unguardable players in the entire league. Year 2 is when things may start to get wacky, especially if they don’t win, but the honeymoon phase of Year 1 is pretty damn intoxicating.

With no Durant, the jump for Caris LeVert becomes even more important. He’s another guy who had a breakout year last year both before and after suffering his crazy injury

He’s 24 years old and in his first taste of the playoffs last year averaged a cool 21/4.6/3.0 on 49/46% shooting with 2.4 3PM a night. That’s some stud shit. It’ll be interesting to see now that he’s playing next to Kyrie if he can have that same sort of success he had next to DLo and if we see him bump things up to like a 15-18 point per game scorer with improved efficiency. While this team has depth, with Durant out they need that elite secondary scorer next to Kyrie if they want to be serious about contending in the East and there’s no reason to think LeVert can’t be that guy.

You know what you’re getting with Dinwiddie, a guy that might just be the best reserve guard in the league, and guys like Joe Harris in terms of shooting and Taurean Price in terms of being a 3 and D wing, but LeVert is the wild card in my opinion. This was a Nets team that was 19th in offense last year and 15th in defense and that makes sense when you look at their win total. They were an average team who made a name for themselves by playing their dicks off and making things tough for their opponents. Well now they have real expectations. Just like with teams like LAC, we have no idea how they respond to that challenge, and if the addition of Kyrie will help or hurt the good chemistry these young guys seemed to form.

If you look at their style, at least that should fit all these new pieces. The Nets ran a shit ton of isolation last year at 8.1% which was the 4th highest in the entire NBA. They also were among the league leaders in drives. While DLo thrived in that system, going from him to Kyrie is for sure an upgrade. Even if they only get slightly better in these areas, as long as it’s more efficient that’s all that matters. What I’m interested in seeing is how adding someone like DeAndre Jordan will help their P&R game. In terms of roll man scoring in the P&R, the Nets finished in the 23rd percentile. That stinks. Last year on the Mavs Jordan ranked in the 93rd percentile and on the Knicks the 91st percentile. This is an area he thrives in and is a drastic improvement from Jarrett Allen’s 67th percentile last year. I anticipate we’re going to see a lot of P&R with Kyrie/LeVert and Jordan that ends up with numerous lobs. So put it all together, you have an elite scoring upgrade at point guard, a young wing player poised to make a leap in LeVert, and you just upgraded your post scoring in a set that you run a good amount. Not bad!

Remember all those wins by 3 points or less? A lot of that had to do with the fact the Nets were a top 10 offense in the clutch. Kyrie Irving, pretty good clutch scorer. If they can get their defense into the same range up from 19th last year well now you really have something. The reason they were so deadly was because when games got close, this team lit up from from deep. A total of 34.6% of their points in the clutch came from three, which trailed only GS for the highest in the NBA. Whether it’s Joe Harris or their point guard taking over, you have to respect this team from three late in games which is only going to open things up more for Kyrie/LeVert to cook.

We know this team is going to fuck offensively. For me it all comes down to how they improve on the defensive end that will determine if this is another 1st or 2nd round type team or if they can actually win multiple rounds. The point is, this 4 year rebuild in BKN is now complete and they are poised to be a factor in the East for the foreseeable future with or without Durant. Legit title contenders with him healthy, but absolutely a potential problem in the meantime.