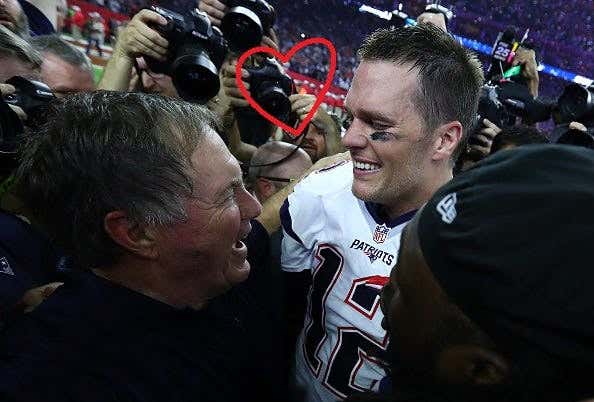 Tom Brady did his first weekly, contractually obligated appearance on WEEI of the 2019 season this morning. And was asked about putting his house on the market in the midst of yet another swirling firestorm of reported bad blood, rumored animosity, and speculation that he’s feeling disrespected and planning to leave New England at his first opportunity. And naturally, he admitted he’s miserable here, hates everyone in the organization and said he’s already made a playlist of Getaway Music he can crank in the car as he puts Gillette Stadium in his rearview and peels out in a hail of flying gravel.

I kid. He said exactly what you’d want him to say:

“I certainly hope not. You shouldn’t read into anything,” he said. “It takes a long time to sell a house. I don’t know if you guys know, my house is little bit of an expensive one, so it doesn’t fly off the shelves in a couple of weeks. …

“I am certainly at a place — we have been at the same place for a long time and I love playing for the Patriots. I have such a great relationship with Mr. Kraft and Coach Belichick and our team. We’ll worry about that when that happens. This isn’t the time to worry about it.”

“With the team, obviously I have had incredible success as this team has had over the last 20 years,” Brady said. “We have a great relationship and if anything the Patriots have taught me, it is being in the present and not resting on what has happened in the past and certainly not worrying what is happening in the future. I am excited to get out there and play this year and do what I hope to do for this team, which is be a great leader, be a great example, be a great player. And then beyond that, there’s just too much work to be done between now and next season. There’s no point in really worrying about it. That is how I feel.”

Part of the deal is a provision that does not allow the Patriots to place the franchise tag or the transition tag on him after this season. …

“Beyond this year, whether it is signing for five more years, or signing a franchise tag, or not playing — none of those things need to be decided this year. I think what it was was focusing on this season and being in the right mental, emotional frame of mind to go out there and perform at my highest level.

“Like I said, I have such a great relationship with the team and I have 20 years of success with Mr. Kraft, Jonathan (Kraft) and with Coach Belichick, with the whole organization and with the coaches. They know how I feel about them. We’ve just done some great things and we’re going to try and do it again this year. It takes a lot to get (from) now to March and I don’t want to overlook the big challenge that we are facing. I don’t want my mind convoluted with thoughts that are premature or ones that I am worrying about beyond what the current situation is, which is us trying to go achieve what we all hope we can achieve. That is where my focus is and that is what I am excited about. Let’s go. Put me in coach. I am ready to go play.”

Ohmygod ohmygod ohmygod! I’ve never heard anyone so uncertain of his future and miserable in my whole life! The horror. The horror. Brady has to be the most abused worker since Upton Sinclair’s “The Jungle.” There are child laborers pitching themselves off the roofs of cellphone factories in China whose dying thoughts are, “This is bad, but at least I’m better off than Tom Brady.” No wonder the New England media has taken up his cause and whipped the public into a frenzy of rioting and looting over his oppression.

All seriousness aside, here is the situation. Brady and the Patriots both found themselves in completely uncharted contractual waters. There is simply no template, no precedent for what to pay a quarterback in the years he’ll be 43 and 44 years old. But they did find a way to juggle the numbers in a way that gives Brady an $8 million bump this year while freeing up $5.5 million in cap space for the team. Win/win. And not to get waist deep in the swamp of cap talk, but in doing so they put $13.5 million in dead money on next year’s cap:

If Brady re-signs for 2020, that $13.5 million in dead money will be the starting point for his cap number. Which means that he’d likely sign another multi-year deal aimed at further kicking the can into future cap seasons.

That is way more than they’ve ever been willing to eat in the past. The Patriots simply do not put themselves in that kind of Maximum Security Cap Jail. The front office would pull a collective Jeffrey Epstein before they’d squander that much of their precious cap room. Which for now is a sunk cost that gives them 13,500,000 incentives to work out another extension later on.

The fact is, there is a mutual trust between Brady’s team and the Krafts that has been built up over the unheard of SIX deals they’ve worked out over the years. It’s a trust that allows both sides to agree to do what works best for everyone in the short term, pays Brady what Drew Brees (coming off back-to-back seasons where he broke the record for Completion %) makes, and gives him the peace of mind of knowing that they can’t force him to take a contract he doesn’t want. So he can focus on his 20th season and fulfilling the prophecy of The One With the Seven Rings. Because he, his coach and his owner have great relationships and want to continue winning banners.

Granted, his answers aren’t as sexy as yet another year of fake hysteria. It won’t drive ratings like unsubstantiated claims his wife is forcing him to quit or go quarterback somewhere else. But fortunately, it’s the reality. There’s nothing to see here.