The Lions Den may be a cute little name for the Penn State coaches to call this drill. But that actually looked like one of those Planet Earth videos where a gazelle somehow escapes four hungry kings of the jungle using nothing but pure instincts and mind-blowing God given ability in four simple parts. 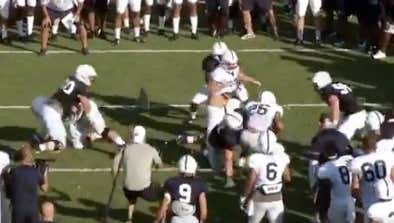 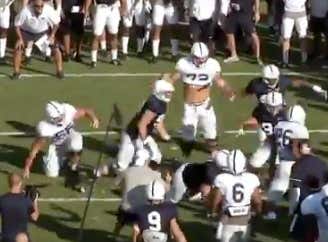 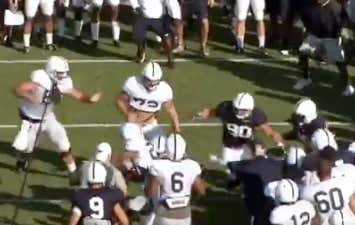 Saquon Gallop Leap (which is probably my favorite celly in the NFL right now): 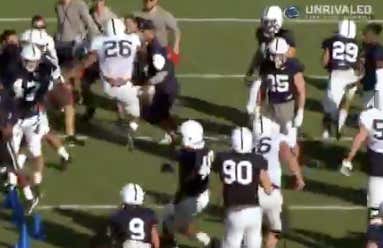 I guess you can make a case that if Saquon can make pretty much every first tackler miss in the NFL, four college tacklers don’t stand a chance even in like four yards of space because Saquon is clearly a mutant that should be under the tutelage of Professor Xavier in South Salem, NY instead of Pat Shurmur in East Rutherford, NJ. Or people will yet at clouds about running backs being a dime a dozen and should never ever be drafted high. But fuck I love watching that guy do crazy shit like that while wearing my favorite team’s colors while also somehow apparently being just as good a dude off the field.

I know last week ended up becoming Daniel Jones Hype Week. But this is a nice reminder that after all the crazy shit and bad press the Giants got this winter, they still have a freak of nature like that to handle the rock roughly a zillion times. All we need is Blitzin’ Jimmy Betcher’s system to turn the young defense into a bunch of quarterback killing monsters, the offensive line to finally gel after a decade or so of shit, the receivers to stop dropping like flies, Aldrick Rrrrrrosas to continue to kick the dick out of the ball, and either Eli Manning or Daniel Jones become at the very least an average QB this season. And if all that happens, maybe Saquon can make some crazy shit happen this season for Giants fans who have been taking a beating online for what feels like forever.

Side Note: This has been said in the past, but there is noooooo way that Ace Ventura sees the light of day in its current state if it was made in 2019. Forget about the reaction to the big reveal about Finkle/Einhorn. That mental hospital scene alone would caused the online outrage machine to short circuit