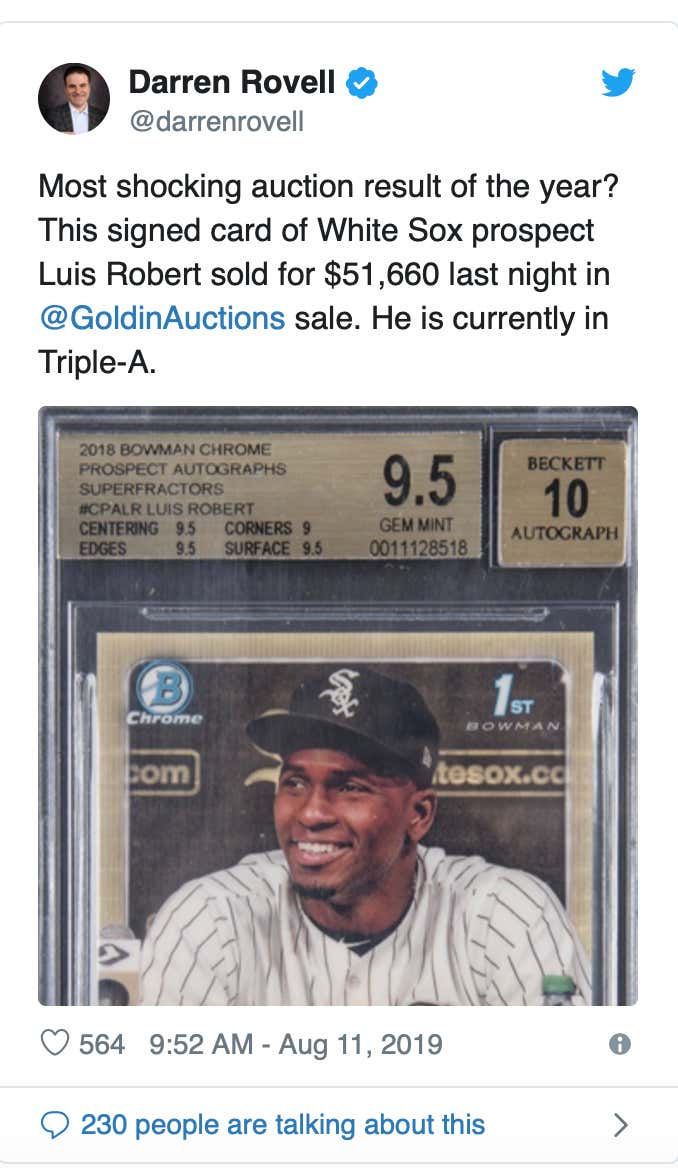 So I was waiting for more info to come out on this yesterday but nothing really did.  All we know is that Luis Robert has a baseball card that just sold for about 52 large.  Not sure who bought it or why it’s so valuable, just that Robert is a hot topic.  But let me ask a question: What the fuck is wrong with people?  Autograph weirdos are the worst.  Stand in line for 3 hours just to get a piece of cardboard with a signature on that?  Hard pass.

But the important part of all of this is Robert STINK right now.  Yes, I’ve been clamoring for his call up.  Still think they should have his ass on a plane and starting tonight vs. Zack Grienke and this Houston Astros, but that’s beside the point.

A few weeks back I sent out this tweet: 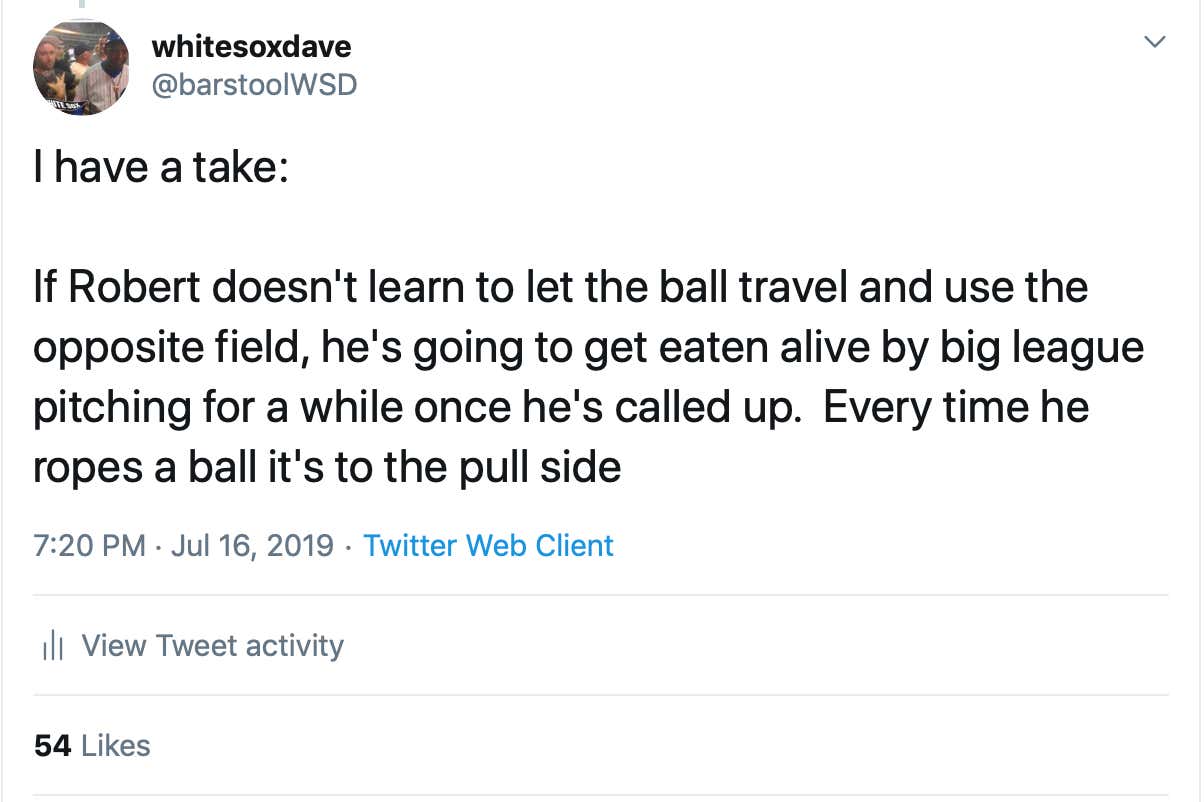 To which a LOT of Sox fans were pissed off at my unbiased, yet heartfelt opinion:

and it was due to me saying he needs to work oppo more on breaking pitches on the outer half.  In fact, it came after this home run:

Now I’m an asshole who blogs on the internet for a living.  But that doesn’t make me incorrect.  This pitch was on the outer half: 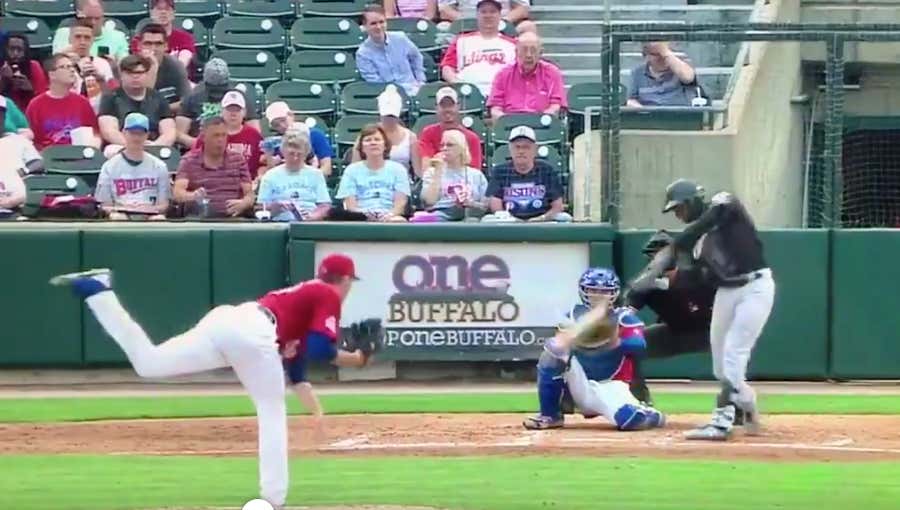 He got around the baseball here.  I won’t go into the mechanics of hitting right now, but his process here was erroneous.  Yes he still murdered it, yes he found a barrel, yes I’m nitpicking a dinger.  But I’m not worried about AAA results as much as I’m worried about AAA processes.  His process in this at bat wasn’t flawless.  The result was great, the process that lead to this result wasn’t.

But low and behold, I was correct.  Because AAA pitching has, to some extent, figured him out recently.  Here are his last 10 games: 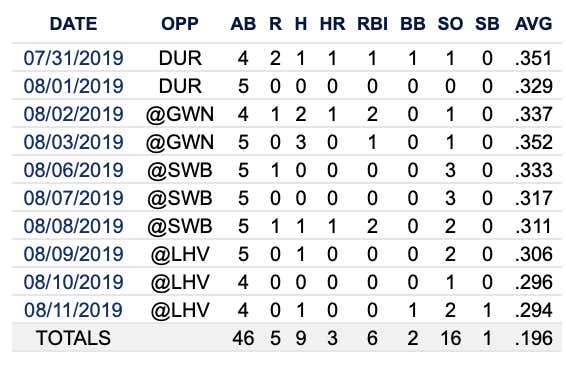 Yeah… not good.  And ya know how AAA pitching is attacking him?  Just like I knew they would when I identified his pull happy swing and approach about a month ago on the aforementioned dinger he hit.

Keith Law noticed the same thing.  Now Keith Law is a smug asshole, but the dude knows hitting inside and out.  I highly respect his ability to scout and break down hitting.  He checked out Robert a few days ago and guess what?  Him and I share the exact same opinion on Robert.  I don’t claim to be some baseball savant but I also know wtf I’m talking about just a little bit, and Law backed up my take on him:

On Tuesday night, though, he was a mess at the plate, and the RailRiders — the Triple-A affiliate of the Yankees — had a pretty good idea of how to attack him: velocity in, sliders down and away. Robert swung and missed mostly at those sliders, ranging from down toward the low outside corner to way off the plate, many of them in the dirt, and swung and missed twice more on fastballs in at 92 and 94 mph

Now this doesn’t mean that I am worried about Robert or that I don’t think he will be a superstar.  I’m not and I do.  It just means that there is going to be a hefty adjustment period once he gets called up to The Show and I am telling White Sox fans to expect it, because I’d be shocked if it doesn’t happen.  Until he either A. lays off hard sliders down/out or B. learns to let them travel and goes the other way with them, he’s going to strike out a LOT, just like he’s doing right now.

But I’d rather him do this against MLB pitching.  Not AAA pitching.  At this point I am not sure that Hahn and Co. feel the same and they might stow him in Charlotte until mid-April next year, but the point remains: those who use all fields typically succeed.  Those who don’t typically struggle.  And though he stinks at the moment, failure is 10000000% part of the development process.  It’s a very good thing that he’s struggling right now because he needs to learn how to adjust.  I expect him to figure out this slump in the next few days and start to hitting piss rods from foul pole to foul pole.

And once he does, watch out.  This kid could be a 30/30 guy that plays Gold Glove defense for the next decade.