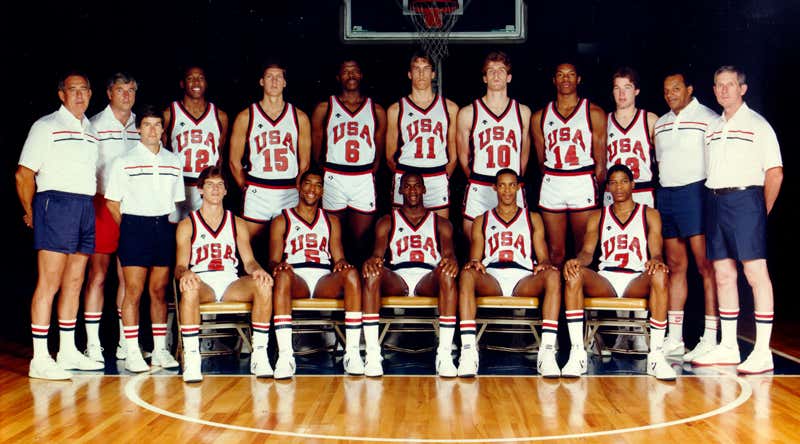 Team USA crushes Spain 96-65 at the Forum to win the Gold Medal at the Los Angeles Olympics. The Americans cruised through the tournament as they won each game by double-digits. Team USA was helped by the Soviet Bloc boycott but likely would have won the Gold Medal any way as they featured a roster that had three future members of the Dream Team, Chris Mullin, Patrick Ewing, and Michael Jordan.

Of all the pre-professional USA Basketball teams, the 1984 squad in Los Angeles may have been the best. With amateurism strictly enforced in the past, only players before becoming professionals could play in the Olympic Games. This meant a college star had to time his junior or senior year with an Olympic year. The 1956 team was strongly led by Bill Russell in Melbourne, as he delayed the start of his NBA career by playing in the Olympics. In 1960, Jerry West and Oscar Robertson were among the stars in Rome. While in 1964, Bill Bradley took Team USA into Rome. However, Lew Alcindor (later Kareem Abdul-Jabbar) declined to join Team USA in 1968, as all the UCLA stars chose to keep away from the games due to John Wooden not being named coach.

After a series of Olympics in which Team USA was devoid of stars, the 1984 Olympic Basketball Team coached by Bobby Knight from Indiana was a glimpse into what would soon become the league’s golden era. So loaded was the NCAA in 1984, that future Hall of Famers Charles Barkley, John Stockton, and Karl Malone, all of whom were on the Dream Team were cut from the Olympic Team’s final roster. An early indication of the Olympic Team’s greatness came when they beat teams of various NBA in a series of games, including one featuring Larry Bird and another with Magic Johnson, as Michael Jordan’s greatness began to take hold.

In the preliminary round, the Americans barely broke a sweat as they won all five games, by an average of 19.6 points. Moving on to the medal round, Team USA faced its biggest test in the quarterfinals as West Germany proved to be a pesky challenge thanks to the play of future NBA All-Star Detlef Schrempf. Eventually, the Americans would win the game 78-67 as Steve Alford of Indiana led the way with 17 points. In the semifinals, Team USA slammed Canada 78-59 as Chris Mullin led the way with 20 points. Canada would go on to lose the Bronze Medal game to Yugoslavia

The Gold Medal would see Team USA take on Spain for the second time in the tournament. The Americans beat Spain 101-68 in the preliminary round. It was the only loss suffered by Spain in the tournament before the medal round. In the Gold Medal game, it was all Michael Jordan, as the future NBA legend led the way with 20 points as Team USA won easily 96-65.

The 1988 Olympic Team would struggle in Seoul in 1988, taking a Bronze Medal as it became clear the idea of amateurism had become a farce, as the Soviet Team was professional, as they were soldiers who played basketball fulltime. This led to the decision to allow professionals in the Olympics starting in 1992 with the Dream Team. However, when looking back at the pre-professional era, the 1984 USA Olympic team was the best of all time.