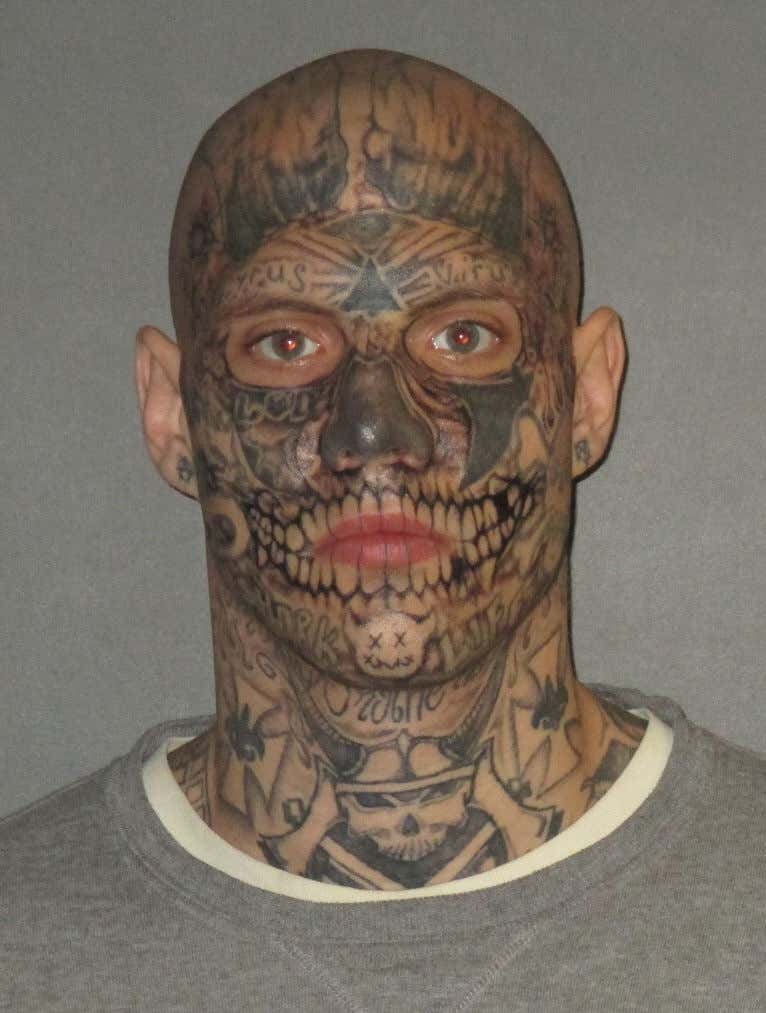 Source – The defense lawyer for a man accused in a double-homicide spent Monday seeking jurors who wouldn’t hold his client in a negative light just because the defendant has a number of tattoos on his face.

“That’s the first thing you see with him,” lawyer Jarvis Antwine told the group.

Antwine explained that he’s looking for jurors who won’t prejudge his client. The overwhelming majority of the panel said they had no problem with Bottoms’ tattoos. …

The bodies of Williams and Hussain were found June 1, 2017, in the back seat of a car in the rural St. Helena Parish community of Grangeville. Each man had been shot in the head. Their bodies were covered by a sheet.

Bottoms’ girlfriend at the time, Megan Marie Gaylord, is scheduled to testify for the prosecution.

Good for the people of East Baton Rouge Parish that they’re open-minded enough to judge William Bottom Jr. not by the ink upon his face, but by the evidence against him. There are so many cliches that apply here. “Innocent until proven guilty.” “Justice is blind.” “You can’t judge a book by its cover.”As opposed to the more pertinent one, “Show me a guy who covers his entire face with tattoos and I’ll show you a guy who probably killed two guys to death in the back of his car.”

But that would be wrong. I’m sure there are plenty of guys who look like Bottom who don’t go around killing people. Some own their own tattoo parlors. Some of them are carnival geeks who hammer nails into their nostrils. Some of them join the Suicide Squad. While the rest … well, not to generalize, but the rest are pretty much Neo-Nazis and gangbangers who routinely kill people in the backs of cars.

Let’s face it, there aren’t a lot of guys looking like that selling real estate or working Wall Street firms. That’s the result of a conscious choice this guy made. To pay good money for the look that says “Send me to prison.” It reminds me a little of when I was working in a court where a guy about my age showed up for his arraignment wearing a t-shirt from The Foxy Lady. Which is a titty bar in Providence. And he was going in front of a woman judge. So I said to him, “Settle something for me. You got up this morning. You’ve got two outfits on hangers and you’re holding them up wondering which one to wear to court. What was the other one? The one that made you say, ‘Nah. I can’t wear this. I’ll look like an asshole’?” And he just sort of nodded in that way that said, “What can I tell you? I have no life skills.”

So I’m not going to lie to you, I could never sit on this jury. Judging somebody by their gender, race, religion, national origin or who they sleep with is as wrong as anything can be, as well as illegal all day long. But unless the jury I’m sitting on happens to be in Mezo-America in the 1500s, once a guy walks into the courtroom sporting the full face tats, I’m going to have a problem with the whole “due process” thing. That’s a “guilty until proven innocent” from me, dawg. Sometimes the cover is the best way to judge a book. And if Bottom’s lawyer gets him off looking like that, let’s put him right on the Supreme Court.