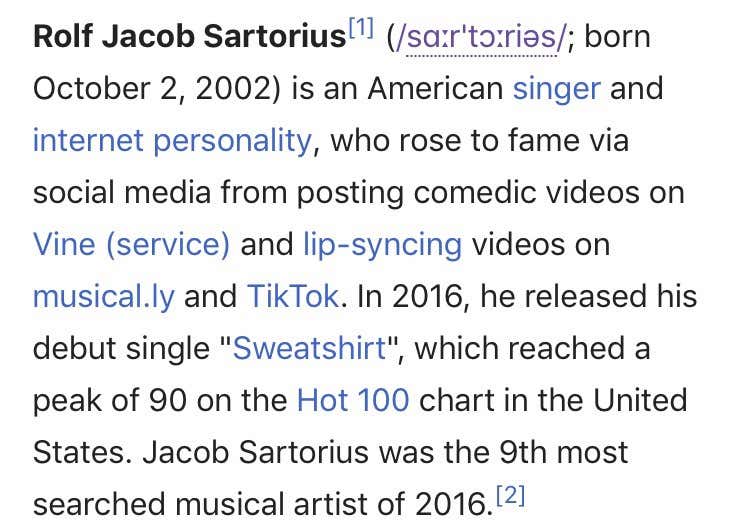 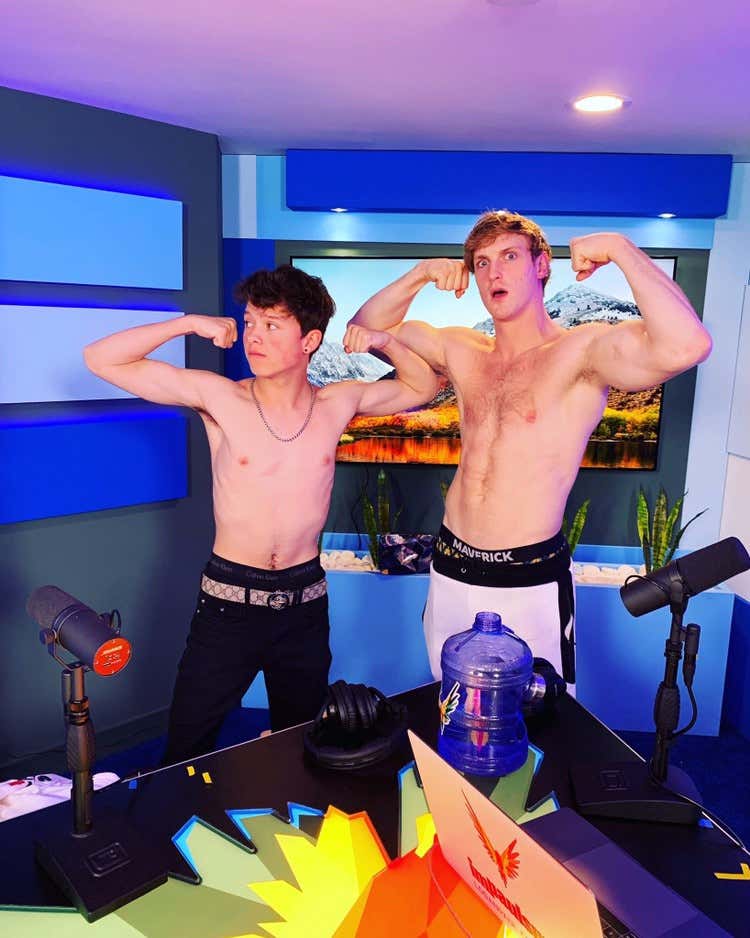 As someone with an extensive history of unsuccessfully attempting to take down both of these menaces, separately, since their initial rise to fame on Vine—which only led to them becoming rapidly more powerful and successful—I knew how dangerous it was for the two of them to have been in the same room together, let alone intimately flexing their limbs with their blouses off. My intuition knew how perilous it was for such a haunted image to exist in our universe. 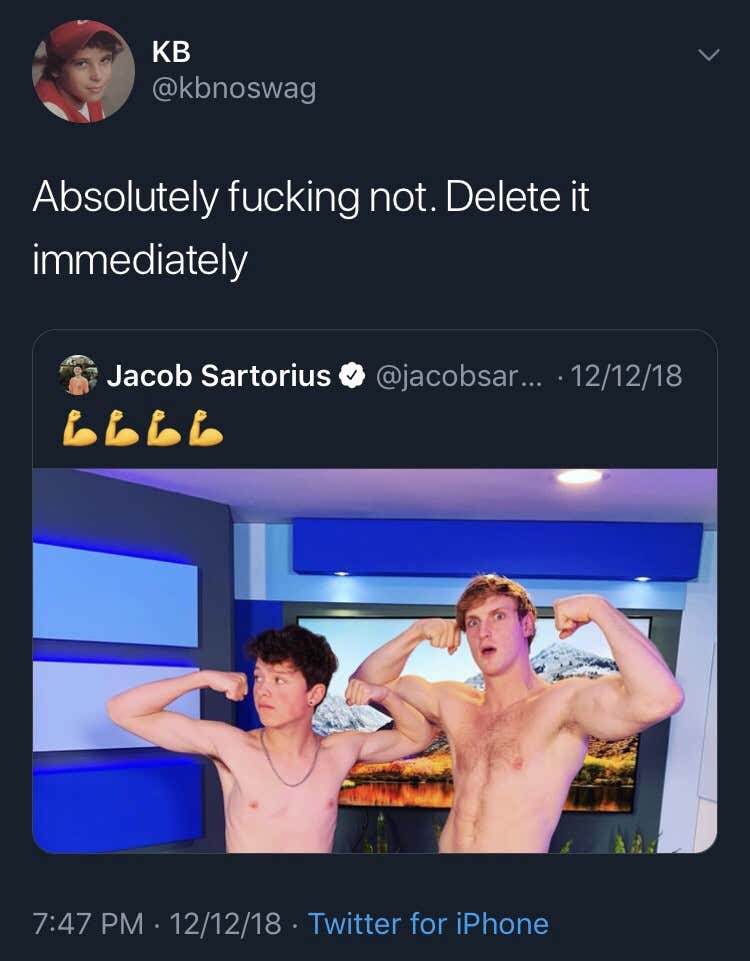 But it was too late. The satanic foreboding, and the evil powers responsible, could not have possibly been reversed or defeated. I was a slave to its repercussions and I waited in agony for the inevitable catastrophe. But days turned to weeks and weeks turned to months and, surprisingly, nothing happened.

Until just a couple weeks ago, on a particularly sticky afternoon in June, when one half of the duo in that harrowing photograph mysteriously slithered into my workplace like a Japanese Forest Moccasin, and wound up in the exact room in which I was nestled. 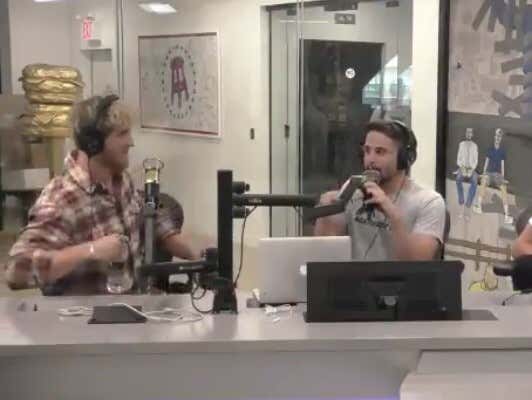 Face to face with the Caribbean-colored eyes of the beast that could’ve very well been my Medusa, I shockingly didn’t turn to stone or spontaneously combust. In fact, we had a semi pleasant and underwhelming interaction, and then he disappeared into the fog. But that night I went to bed with a pit in my stomach. I knew that was just some kind of deceptive trick from the devil to try to make me slip up and get too comfortable. I braced myself for something much more sinister and monumental, but I never couldn’t have predicted or prepared for what was about to happen.

Yesterday, on a particularly dramatic Wednesday, my coworker KFC jokingly mentioned the name “Jacob Sartorius” in a tweet to me. Nothing abnormal. As was tradition, I referred to that miniature Make-A-Wish Magcon bitch as a “little douchebag,” which was a little aggressive in retrospective, but that’s just the way our one-sided beef worked. Besides, what was the little boy who cried, Rolf, gonna do? I’ve been throwing shots of varying intensities and velocities at him for 5 years now, and he’s never made a single peep back at me. 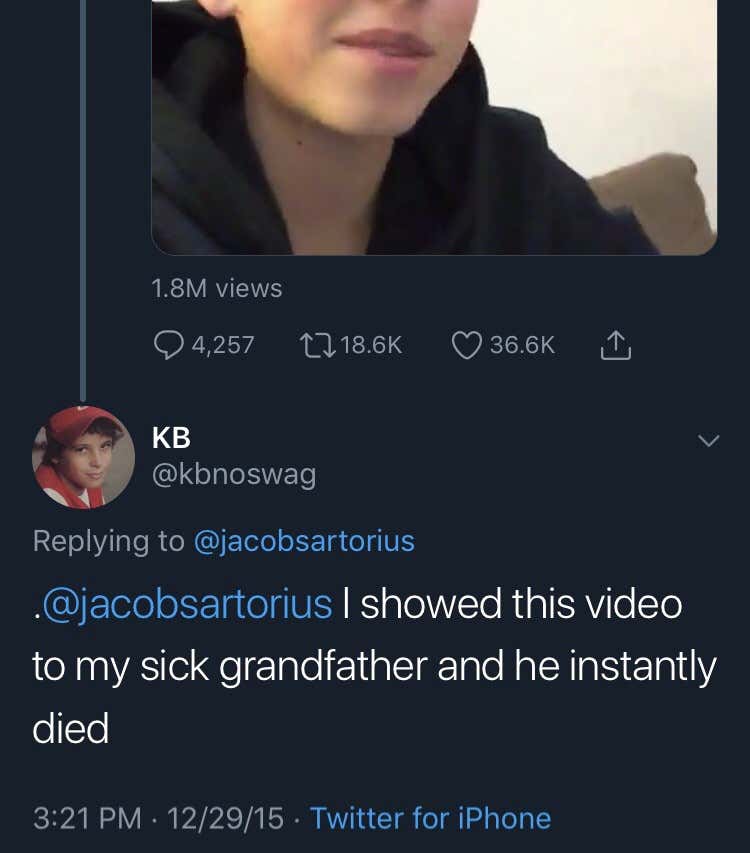 Not a crumb of acknowledgment. Not even a passive aggressive TikTok or shirtless lip-syncing diss track. He just continued to tweet shit like “you’re cute as hell ahhhhhhhhh” and “I’m single afffffff.” I just assumed he had some kind of schoolboy crush on me. He honestly wasn’t even subtle about it. 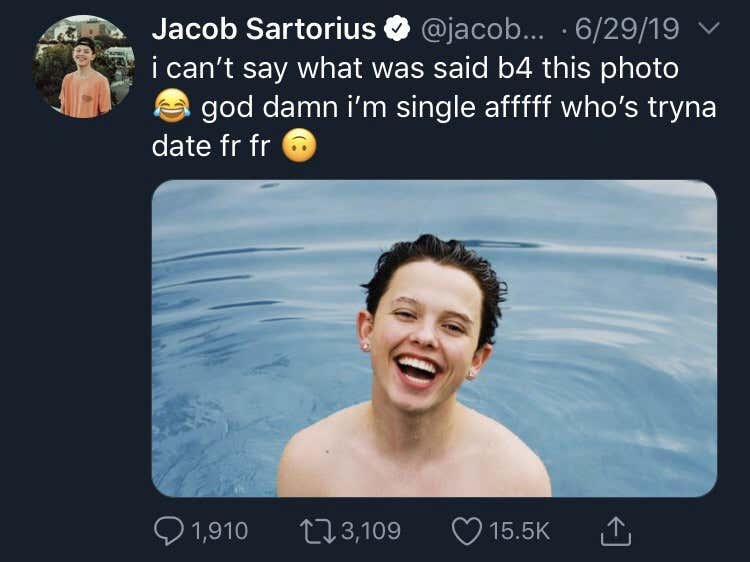 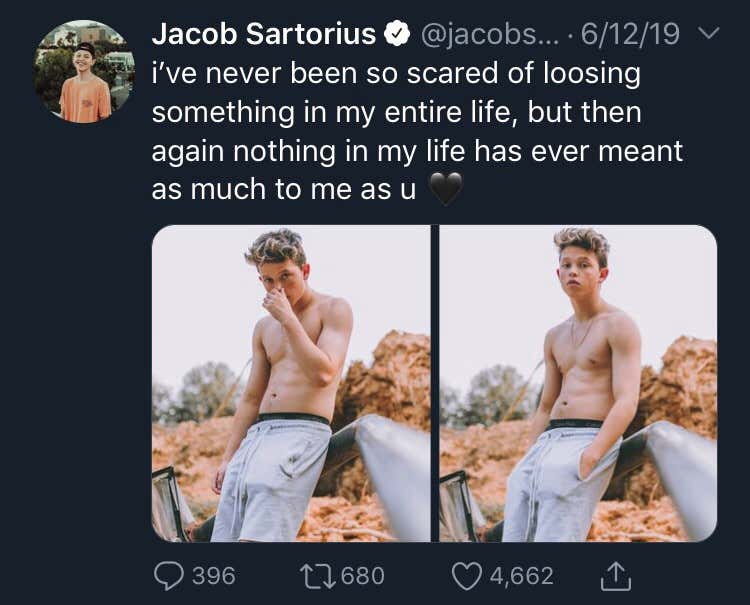 By the time 2019 rolled around, I realized I’d likely never get acknowledged by him. Like Jacob trying to defeat standardized testing, it was a loosing battle for me. Silly me. He was obviously a lover, not a fighter. So when I say that no amount of recurring dreams or nightmares could have prepared me for what happened next, I say that with the utmost sincerity. 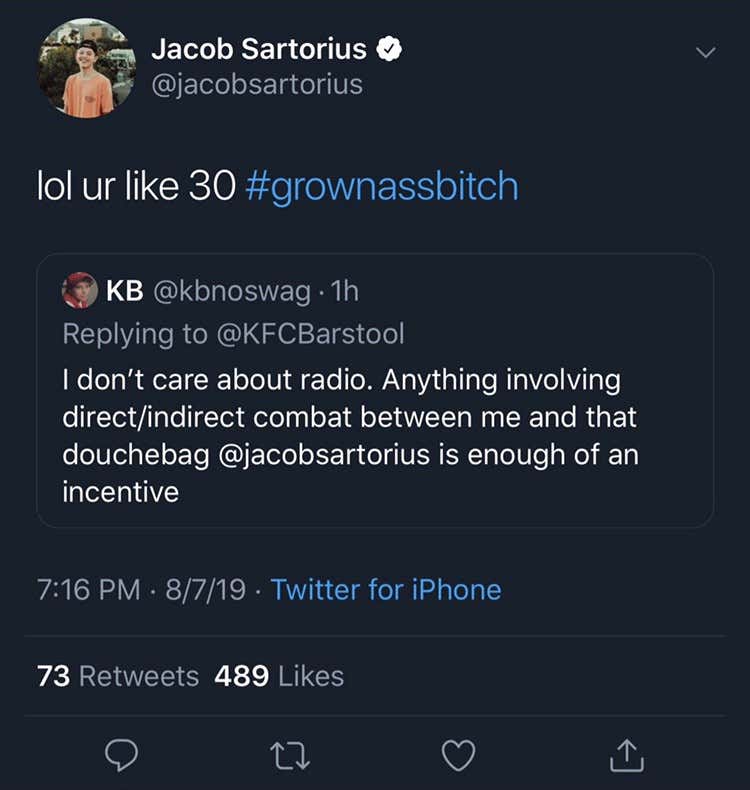 The decibel levels in the gasp that my vocal cords produced when I laid eyes on this notification was nothing short of a scientific wonder or superhuman feat. Like the purest crack in the world served to me on a spoon as silver as the one in his filthy mouth, the prepubescent pop star finally came back at me after all these years. And he came back with the force of a thousand monkey emojis. 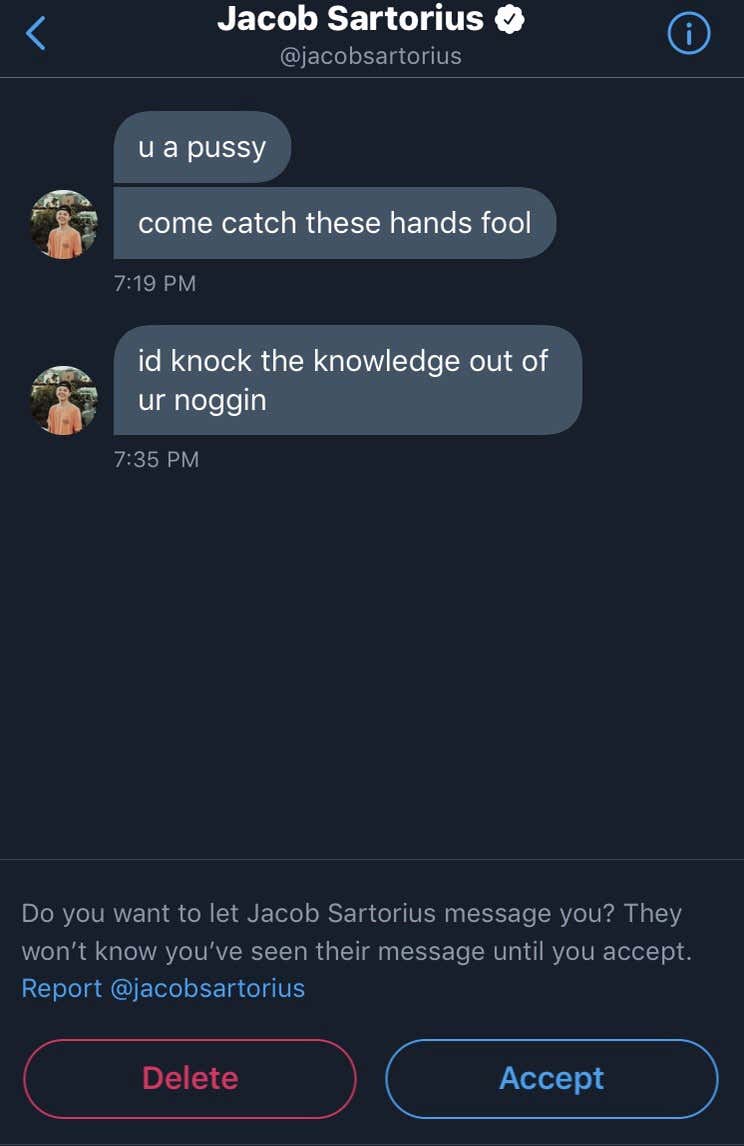 Ship this screenshot directly to the Smithsonian. I was STUNNED. The transition from “You a pussy, come catch these hands fool” to “I’d knock the knowledge out of your noggin” left me in a state of confusion that I haven’t felt since I was about Rolf’s age. The. Knowledge. Out. Of. My. Noggin. He really went from challenging me to a fist fight with street slang to threatening the intellectual wellbeing of my “noggin.” It’s like he took 16 minutes to do some reflecting and then self-gentrified in my DMs. You can’t script the sheer versatility and bizarreness of that threat combo. It was the type of erratic behavior that’s only indicative of a child star finally having their first real breakdown as an aging celebrity. I was speechless.

Did he stop there? Absolutely fucking not. The sentient Zumiez mannequin went full-throttle and put his size-six foot on the gas of his mother’s Porsche and challenged me to an official, sanctioned fight. 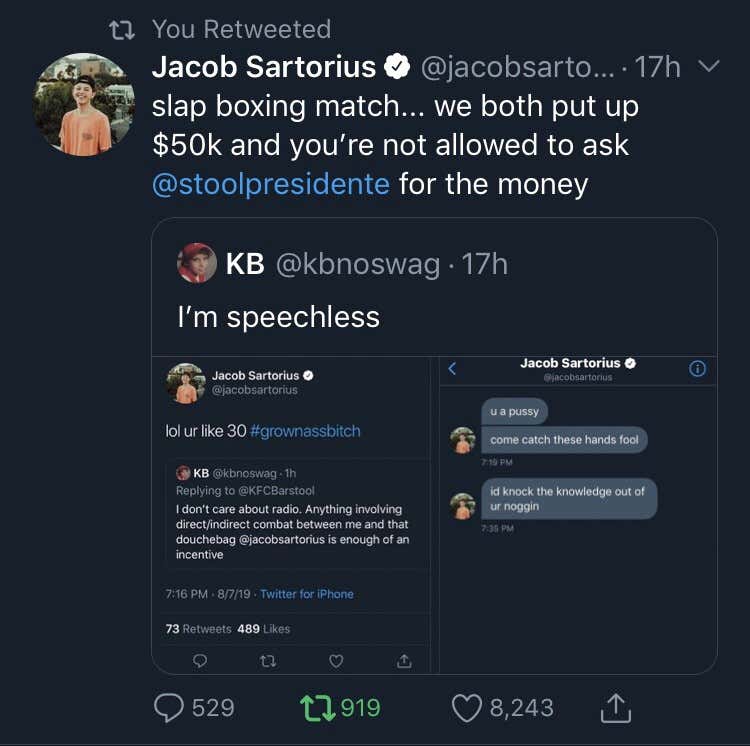 Age shaming. Poor shaming. Derogatory slurs. Violent threats. He was dancing on my half-conscious body and I could feel myself quickly loosing breathe.

Now, I don’t necessarily understand “stan culture” and it appears to be something that I’ll never fully or barely comprehend. But what I experienced with Jacob’s “stans,” or obsessive fans, has to be one of the most perplexing phenomena of human behavior that exists in the modern world. I don’t really know how to describe it with words, but here’s a small fraction of the messages I received in screenshot form, if that helps. 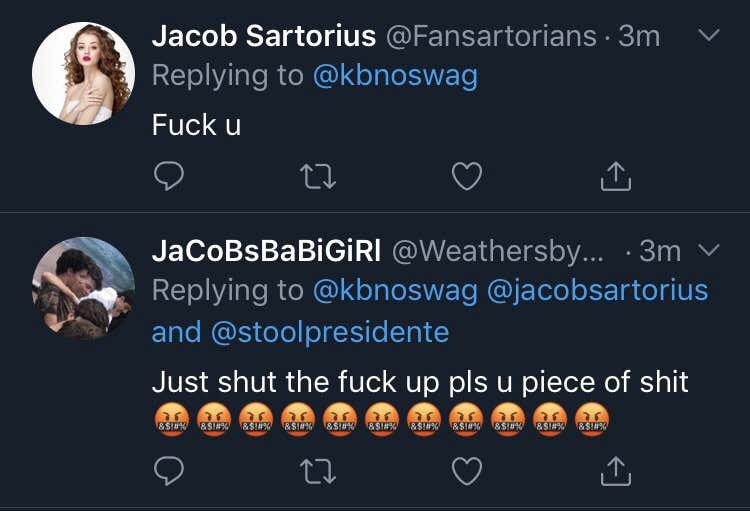 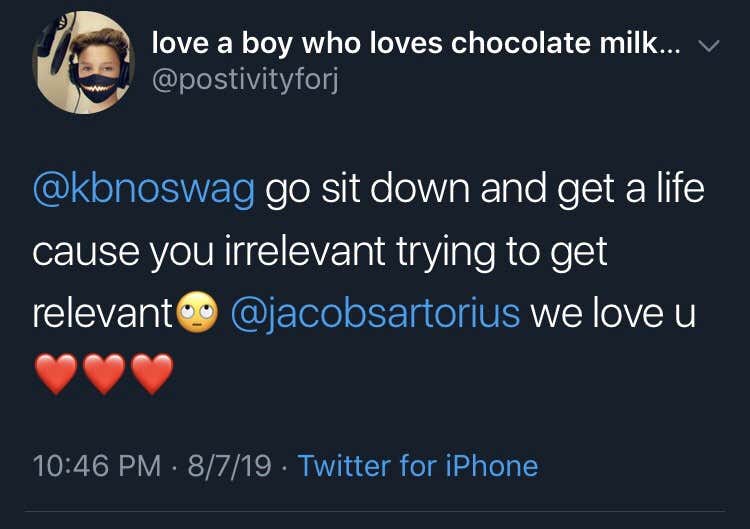 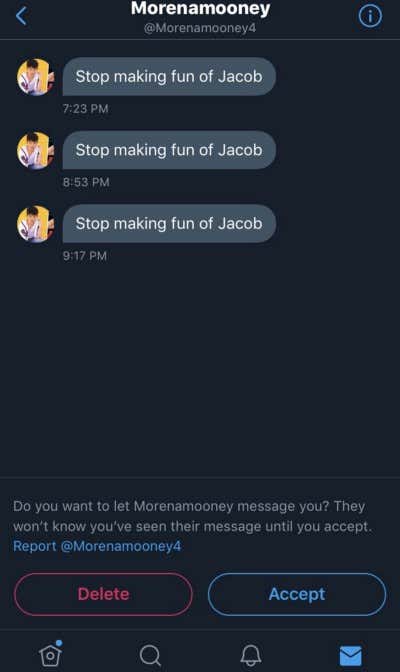 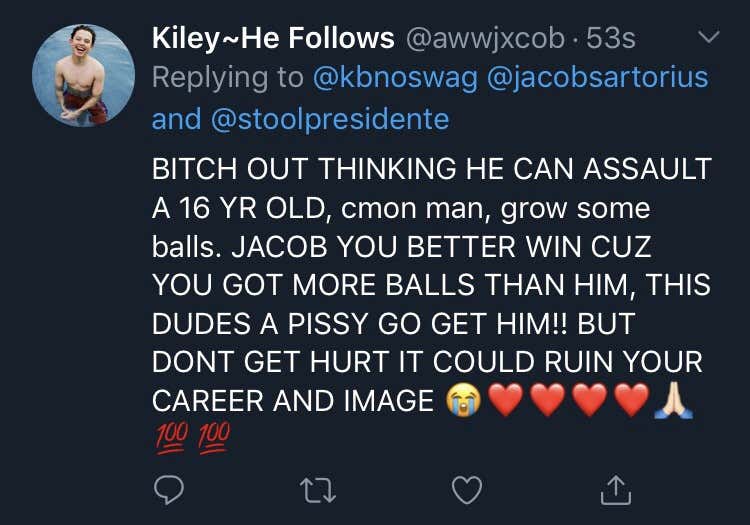 His squadron of Sartorians even started strategically spilling over into my Instagram notifications to torment me. 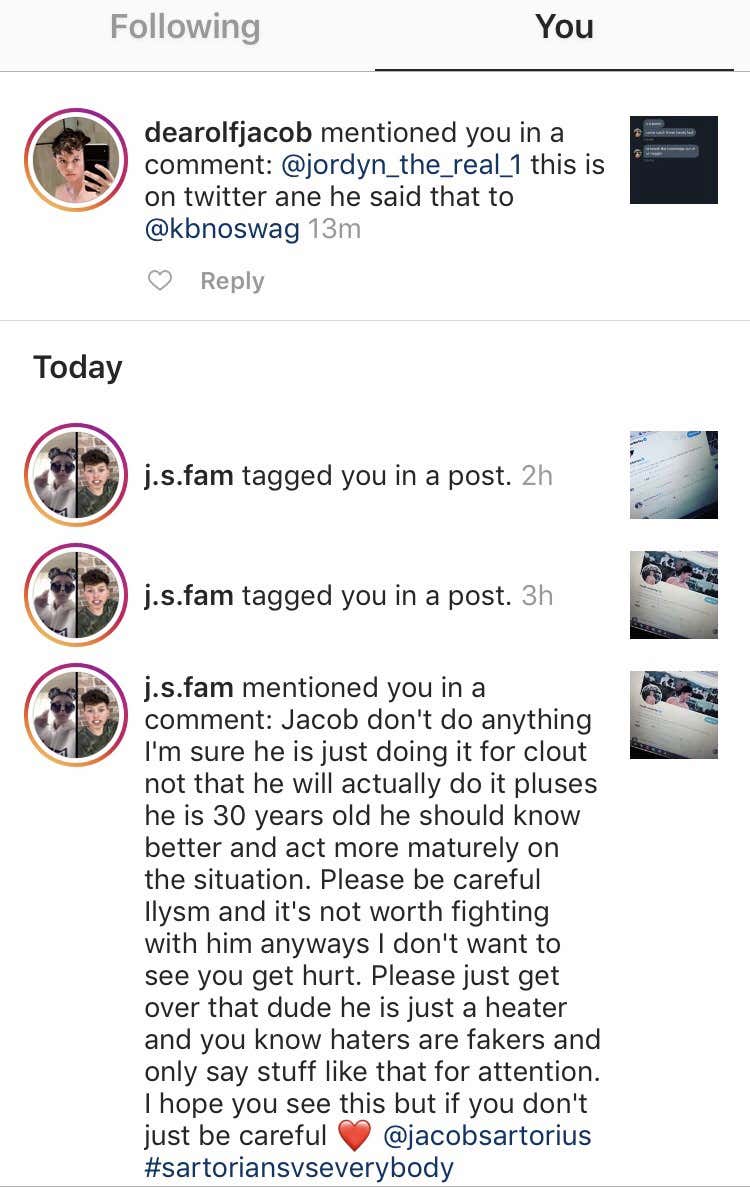 And some of the more sensitive Sartorians started breaking down in my mentions and begging him to relax. This wasn’t the Rolfington they knew and loved. 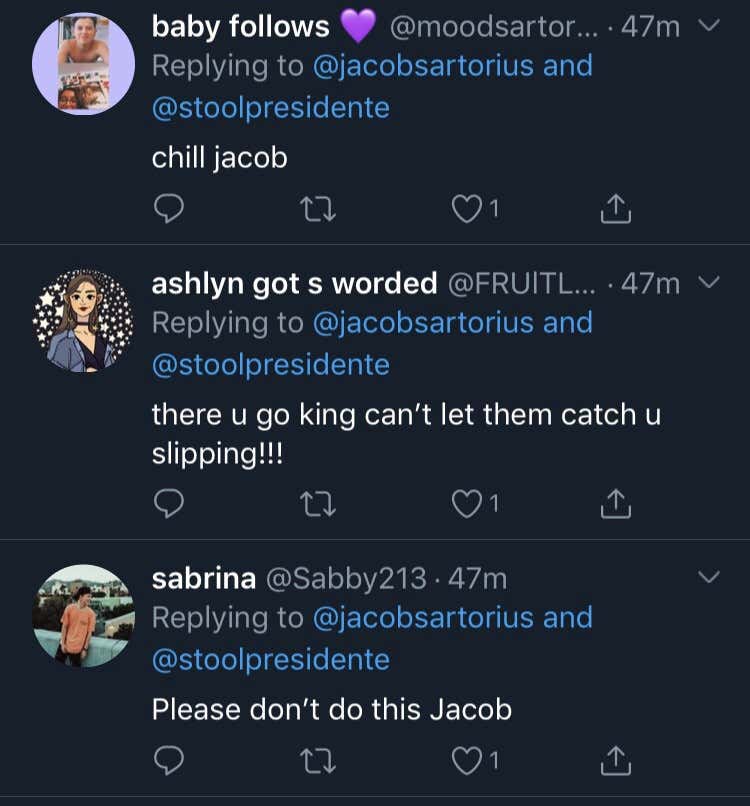 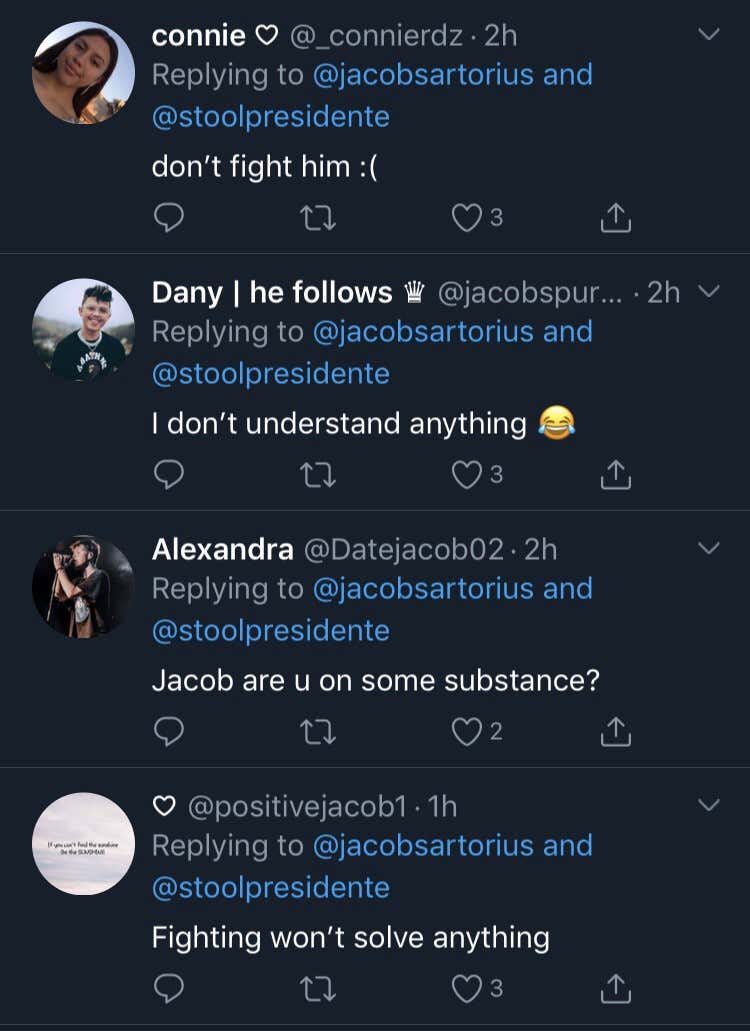 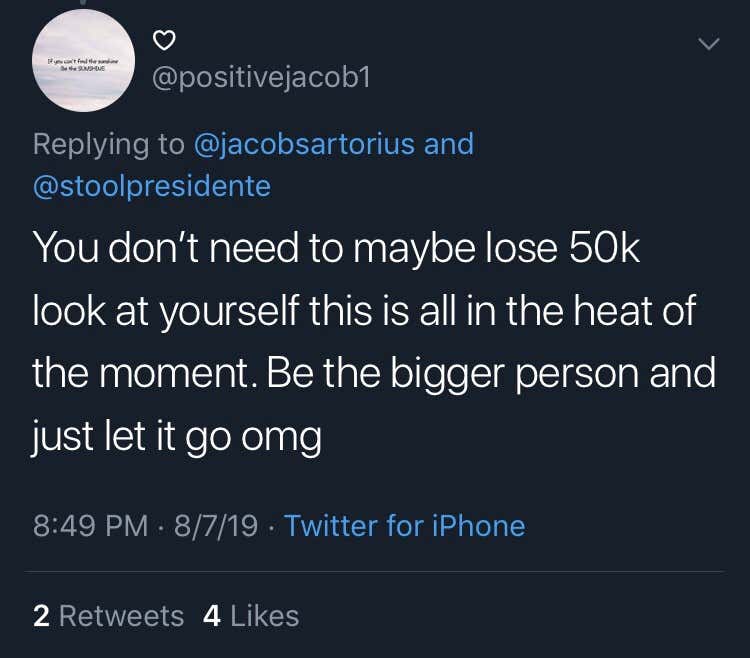 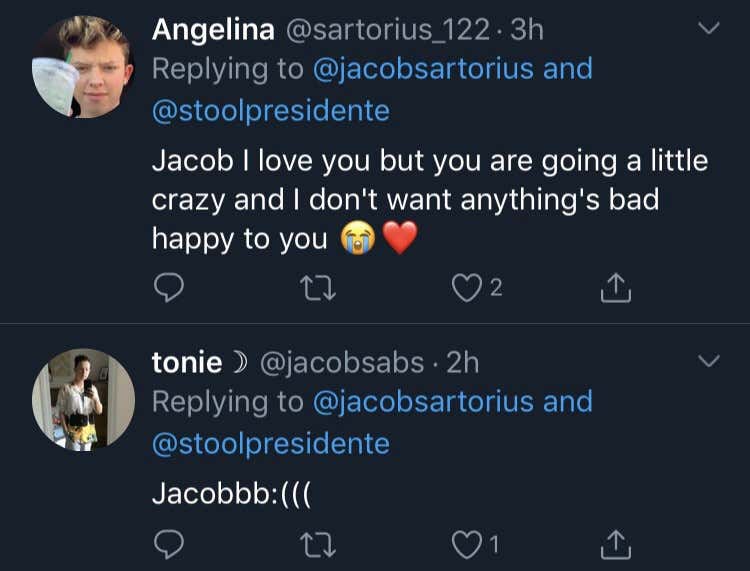 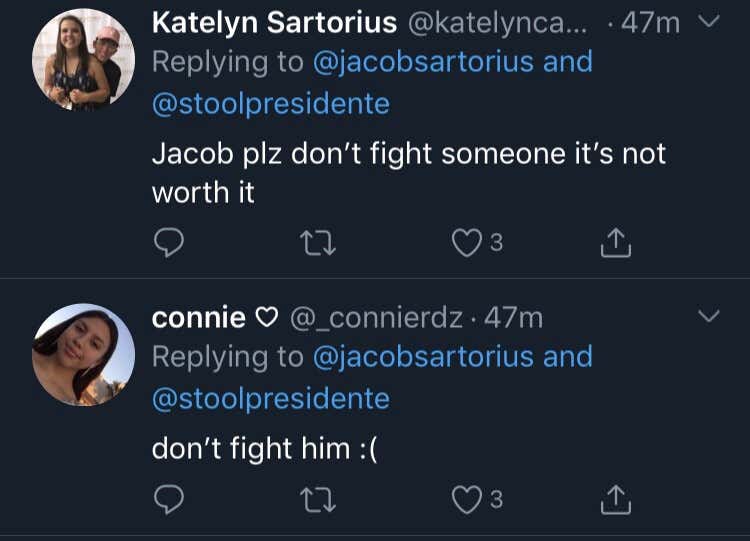 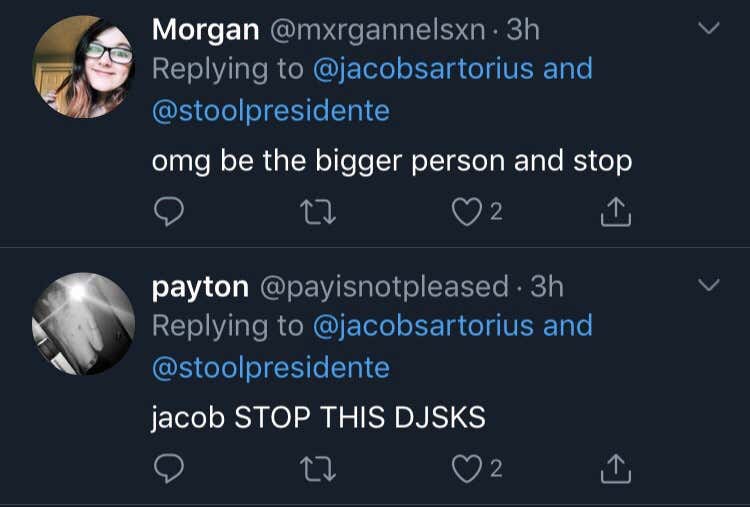 As of right now, I have no idea what to do next. I understand that he made me look like a gigantic bitch. I just feel like, as a 26-year-old man, my hands are a little bit tied here. All I know is the undropped ball’s in my court and the clock is ticking.