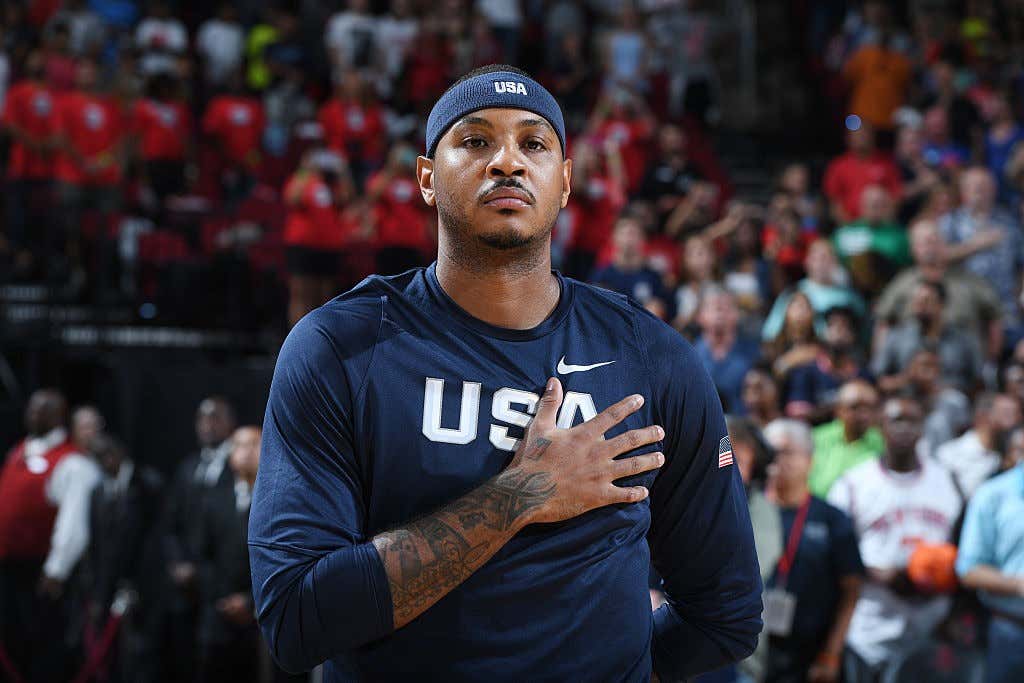 In an interview on Wednesday, Colangelo expressed deep respect and appreciation for Anthony’s contributions to USA Basketball. The 2016 USA Basketball Co-Male Athlete of the Year, Anthony is arguably the greatest player in USA Basketball history. Anthony won a bronze medal in the 2004 Olympics, following it up by helping the U.S. to three consecutive gold’s in ’08, ’12 and ’16.

According to Colangelo, Anthony requested a chance to play through a representative. Colangelo, though, believed it was time to move on.

“I love Carmelo,” Colangelo said. “He made a great contribution. He was a very good international player. But for where we are and what we’re doing, that conceivably could have been a distraction. I understand why the request was made. He’s trying to reestablish himself. I think that has to be done in the [NBA].”

Well, it looks like we can officially give up on the dream of bringing Melo back to Team USA. Perhaps the most decorated Team USA player in history (seriously, that’s not hyperbole) with a resume that reads

the reality is just like their NBA counterparts there isn’t a spot for Melo on this roster and it makes you wonder if this is the nail in the coffin. You could argue that had he been added to Team USA and actually proved he could still play that there would be an NBA spot waiting for him somewhere. I get the line of thinking that Colangelo just wants to move on and he’s right adding Melo to this group would be a bit of distraction because of how everything has gone down at the end of his career. Having said that, this team could definitely use the talent of Team USA Melo. That man is an entirely different beast and it’s not like the current roster is overflowing with proven guys. Over the years we’ve seen that when Melo is on Team USA he’s essentially the perfect teammate so who knows if he would do more harm than good. I could argue the young guys being around him is a win/win for everybody. Maybe there was something to what Melo said when he threw out that his situation may be more than basketball related.

You may remember just last week he went on First Take and laid it all out on the table, and now if he can’t even get invited to Team USA I don’t know what happens next. It sure sounds like Melo isn’t ready to hang it up, and maybe he simply stays in shape and waits for a team to call during the year, but that didn’t exactly work out for him last year.  It’s sadly starting to look more and more like even if Melo doesn’t want to give up his NBA dreams, the NBA and anything even remotely associated with the league is giving up on Melo.

So while that sucks, if I’m the Big 3 I am on the phone immediately. We’ve seen NBA Melo, we’ve seen Team USA Melo, I can only imagine what Big 3 Melo would look like and really that may be the perfect spot for this stage of his career. Just become the best player in Big 3 history and maybe that will convince a team to throw you a bone. Shit, it’s about to work for Joe Johnson so why not.