You know, you’d think that at a time when you’re the defending Super Bowl champions, about to start a run at your seventh championship, returning a roster that really only lost one hard-to-replace starter (who might be back) with a promising rookie class, with a bunch of 2018 draft picks coming off redshirted freshman seasons and you just signed your franchise player to a new contract extension that pays him more while freeing up cap space, that everything would be sunshine, lollipops and rainbows. That you’d be conducting Camp Rancho Relaxo:

But nope. That’s not your New England Patriots. Not in 2019. And pretty much not ever. I’ll admit for a while there I allowed myself to believe that all the ridiculous turmoil of a dozen or so fictional cheating scandals and the phony controversy of the Pliability Wars were behind us. Buried under an avalanche of success last January and February. And that we could stand on top of the mountain of winning, watching the people who perpetuated these myths try to scramble out of the rubble, point and laugh at how wrong they’ve been.

But not any more. Now I’ve resigned myself to the fact that off-the-field controversy is the permanent state of this franchise. That Fake News or Real News, the notion that this team is in a state of Civil War is with us for good.

Tom Brady’s house is on the market. Then it isn’t. He gives a vague answer to a question about his new contract. He’s unhappy. He feels disrespected. His wife is pushing him to leave New England for good, never to return until he’s back to make the storm drains of Foxboro run red with Patriots blood in another uniform. This is our reality.

Consider what Tom E. Curran on his podcast:

“When we look at the fact that [Brady] wants to play until he’s 45 and he had sunk roots here in New England, when he stepped to the bargaining table this time and knew that he had an expiring contract, he knew that we wanted to be there. What he wanted to get was some long term security that would allow him to play to 43, 44, maybe 45 as he has stated.

“I’ve always known that he wanted to play until 43. He told me that in 2012 when he signed a deal. A renegotiated deal. So when he stepped to the table and the Patriots weren’t given him the surety he would get that, what he quickly pivoted to was wanting to have his own autonomy. The Patriots first offered him a more modest pay raise and incentives. All that would’ve brought him to about $25 million. But the incentives were so hard to reach that it wasn’t going to work. …

“Brady did say, ‘You know what? We’ll do that. But you can’t franchise me.” … Brady’s seen this movie enough times that he wanted to have that autonomy at the end of his deal.”

And Curran is well known as having close ties to Brady’s camp. So I accept that this is a thing. The GOAT now has all the leverage for the first time in his career. He’s going into the season with the ability to walk away if he wants, and the Patriots are powerless to stop him. He might very well be back. But for now, we’re in uncharted waters. Sailing toward the edge of the map on an ocean of hopeful trust between Brady’s people, the Kraft family and Bill Belichick’s personnel staff. And if they can’t get it resolved, he makes landfall at some other team.

As controversies go, it shouldn’t come anywhere close to the raging dysfunction brought by Ben Roethlisberger in Pittsburgh, Aaron Rodgers in Green Bay, Antonio Brown possibly out months with frostbitten feet, of all goddamned things, in Oakland or the default setting of the Jets. But when you’ve spent two decades as the Death Star of the NFL, you don’t have the luxury of minor glitches. Every issue that comes up is an exhaust port that everyone will try to drop a proton torpedo down thinking this will be the flaw that blows you to space scrap.

And while we’re at it, another old chestnut has been dug up in the last couple of days. Remember the accusations that the Krafts and Brady have a sketchy deal in place over TB12 Fitness that puts money in his pocket without affecting the salary cap? It’s back. Like the live action version of an old Disney property you’ve seen a hundred times:

Yup. It’s just another fake Patriots scandal that keeps coming back like a weed we can’t eradicate. Even though Bob Ryan’s own Boston Globe looked into it years ago and the NFL confirmed there was nothing there. 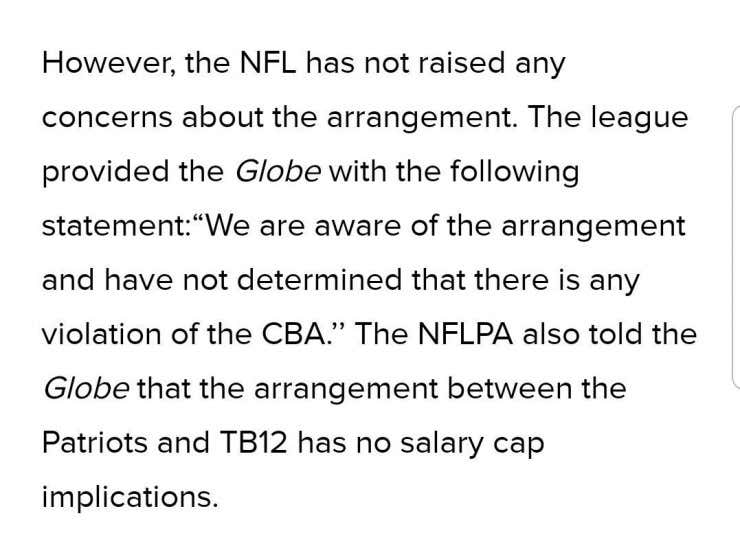 But why let the truth get in the way of a good false narrative now, when repeating long discredited rumors has worked so good for so long?

For me, I’m done pushing back. I’m embracing this. All of it. I’m just going to teach myself to love the chaos. Brady has a shady deal going with the Krafts, but he’s underpaid. He’s falling off a career cliff, but he’s going to be an All Pro somewhere else next year. He loves being a winner but is more concerned about making money. He’s Schroedinger’s Quarterback. And I’m just going to make the most of this bizarre, tumultuous, unnerving, controversial high octane thrill ride.

It’s like that line from “The Third Man” that goes, “You know what the fellow said – in Italy, for thirty years under the Borgias, they had warfare, terror, murder and bloodshed, but they produced Michelangelo, Leonardo da Vinci and the Renaissance. In Switzerland, they had brotherly love, they had five hundred years of democracy and peace – and what did that produce? The cuckoo clock.”

The Patriots are Italy. And I wouldn’t have it any other way. Let the chaos go on forever and I’ll just keep enjoying the ride.