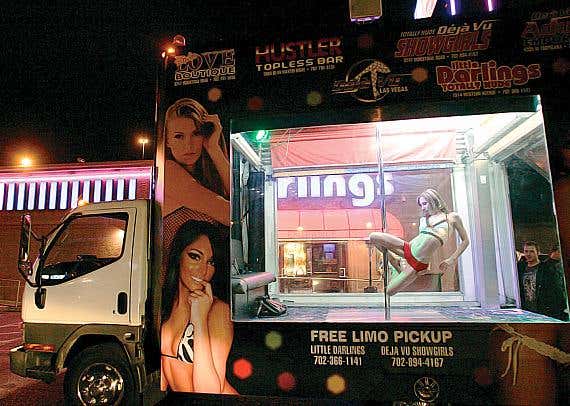 Source – Whether or not the millions of people who signed up for the “Storm Area 51” event on Facebook will find aliens is still unknown, but one thing they will find for certain? Strippers.

Yes, leave it to Nevada – home to legal prostitution – to inject strippers into a seemingly unrelated event.

Deja Vu Services, Inc., the country’s largest group of strip clubs, adult retail stores, and the like, is also the largest operator of adult entertainment businesses in the Silver State with about a dozen locations there.

“Come September 20th, we’ll be there,” said Ryan Carlson, the company’s Director of Operations. “We know what most Americans know – that strippers make any event better – and this one will be no exception.”

The company plans to bring about a dozen strippers and its infamous strip club on wheels, the “Strippermobile”. Calling it the “Ultimate Alien Tailgate Party,” Deja Vu intends to entertain anybody who shows up – before or after the “raid.” Making it rain, of course, will be strongly encouraged.

“We don’t know if there’s aliens at Area 51, but if there are, they’ll be entertained upon their rescue, along with any party-goers that attend.”

This is what we are all about. This is why our ancestors braved raging seas to leave their repressive societies. This is why we tamed a wilderness. Fought tyranny around the world. Mastered the atom. Went to the moon and back. And why we recovered a downed alien craft in the New Mexico desert and reverse-engineered it to give the world silicon chips and microprocessors.

So that some 70 years later, when the citizenry takes positive action to liberate the aliens being kept in the facility, we can introduce them to American culture. The internal combustion engine. Weirdos who follow what they read on the internet. And strippers.

Fake bewbed teenage runaways with hair extensions and crippling daddy issues, greeting our visitors by shaking their moneymakers in the interstellar sign language that says “Welcome.” These pole workers are our version of the musical tones the aliens taught Richard Dreyfuss in “Close Encounters.” They’re our way of communicating. And our species’ message is, “We come in peace.” As well as, “We take tips and a Table Dance is 20 dollars.”

So good luck, “Storm Area 51″ people. Godspeed, Strippermobile. And to all you “Deja Vu Showgirls,” thank you for being ambassadors for all us Earth people. That’s one small split for woman, one giant leap for mankind.