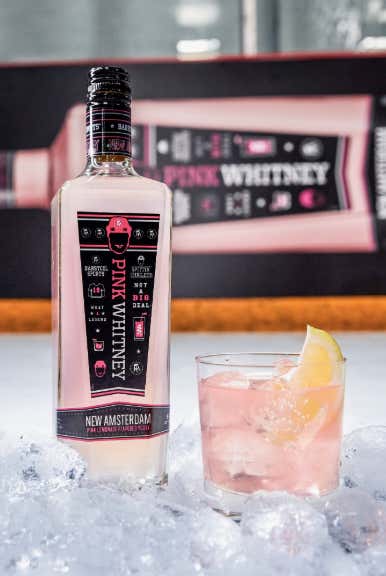 So we broke some pretty major news on Spittin’ Chiclets today. We have teamed up with New Amsterdam Vodka and are launching our own vodka called “Pink Whitney”. The Vodka will be Pink Lemonade flavored and will be available nationwide on 9/1/19.

It’s pretty crazy, we have been working on this for almost a year now and haven’t been able to say anything. So I think I speak for everyone when I say that announcing this info on the podcast today was one of the coolest things we have ever done.

The Whit dog will have a blog later with some behind the scenes video of the whole process of creating the vodka. From the taste testing to shooting commercials in LA, it has been an absolute ride that we can’t wait to share with the world.

Without Portnoy, Nardini, Deidre Lester, MB, Ryan’s wife, and Nate + Michael from New Amsterdam Vodka, none of this happens. Everyone has been so supportive and given us so much creative freedom to do basically whatever we wanted with this vodka. So many people have worked for months on this deal and none of it happens without them.

Lastly, shout out to Whit. During episode 112 with Auston Matthews, when we introduced our new sponsor New Amsterdam Vodka, Whit said “Pink Whitneys” was his go to drink and it has taken off ever since. I can’t believe how big this thing has gotten and I really can’t believe we announced we are launching our own vodka.