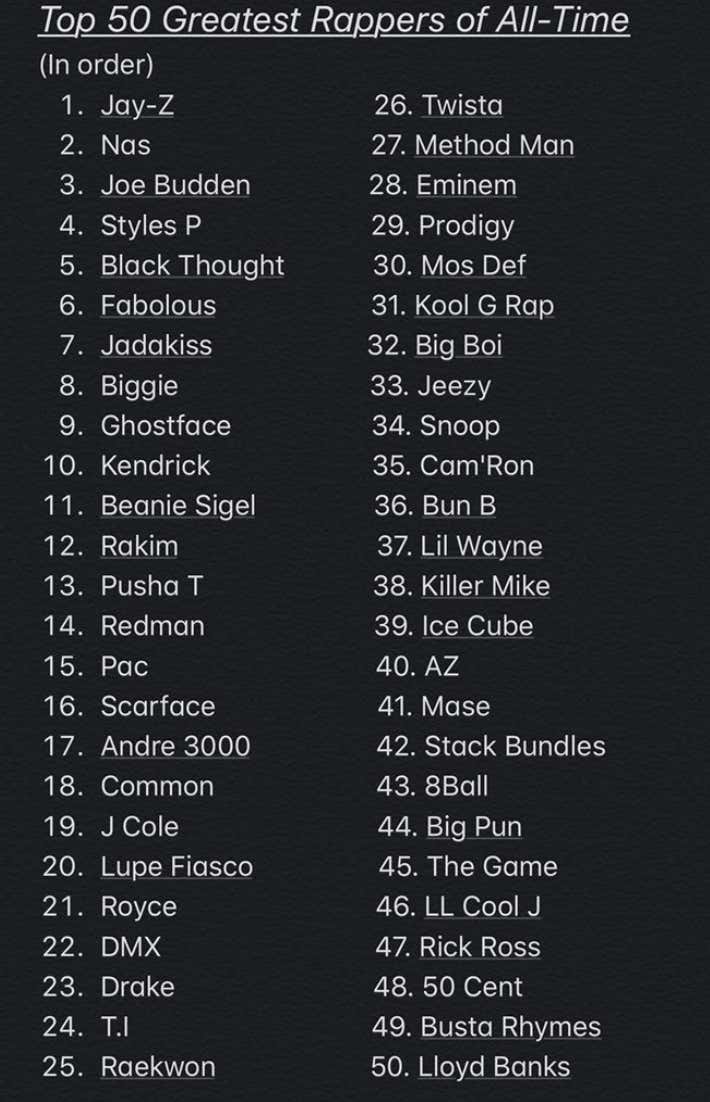 (Editor’s Note: I clicked publish on this at like 10AM and just realized it’s not showing up on the site.  Strong chance DevNest has ties to this shitty podcast with this shitty rap list.)

So this is like the most viral thing on Twitter right now.  So viral it has staying-power you don’t see often – it’s been talked about nonstop for more than 48 hours. I hung back a little bit to see if any of our rap guys were gonna blog it but that was a no go.

I’m about 99% sure this list is a massive troll job to get a podcast I’ve never heard of with a little over 200 followers trending all over twitter. I mean as a troll job it is flawless. Absolute perfection. Two things people love: lists, and arguing about rankings. Just check the activity on this thing.  Like a trillion responses.  I’m blogging about it.  There you go.

Biggest hint is not one woman on the list.  Make that the third thing people love: yelling about sexism.

However I choose to live in a world of the 1% where this list is completely dead serious. That world seems a lot more fun. A world where Joe Budden is the #3 rapper of all time and Redman is above 2Pac. Where Eminem is in the 30s behind fuckin Twista.  No Gucci Mane La Fleur?  No Big L?  No Eazy? No Future?  Fuckin Mase?

Here’s a better list.  It’s a first draft off the top of my head so I’m sure I’m forgetting a bunch and I’m open to revisions, I just know that objectively it is roughly 1,000-6 bajillionX better than that one: 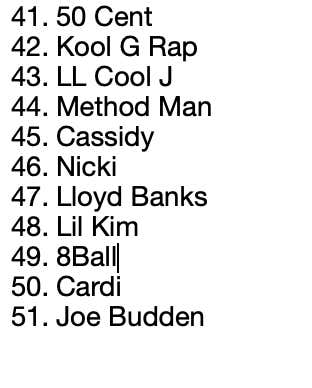 Already seeing that I forgot Talib, Kurupt, Bizzy, Nore.  Deleted the text file though so fuck it.  Throw in your 2 cents below.

**UPDATE 2: Good points from Twitter: Beastie Boys, gotta squeeze them into the top 25.  Ludacris near the bottom but probably on there. Lots of Nelly but, while I’ll party to his and the Lunatics hits for the rest of time, technically as a skilled rapper he’s not top 50.   And to the people who said Diddy, no.