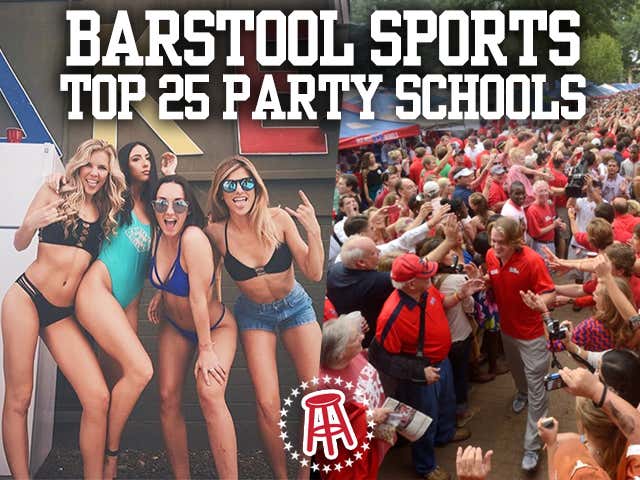 We’ve got something new for you here at Barstool Sports. For the entire internet’s history, the only resource for the top party schools in America has been the Princeton Review. Why are a bunch of nerds rating where the best schools are to party? That’s why we, here, at Barstool Sports have decided to create our own top 25.

This list has been decided upon with the greatest minds on college partying this company has to offer. It started with our viceroy team that looks over 350+ schools on a daily basis. They’ve seen the videos, they’ve heard the stories. We then talked with multiple voices within the Barstool content team. We got their opinion, weighed the facts and came up with this list. It will be updated throughout the 2019-2020 college school year. In no way is this list final, but instead, a pre-season top 25. 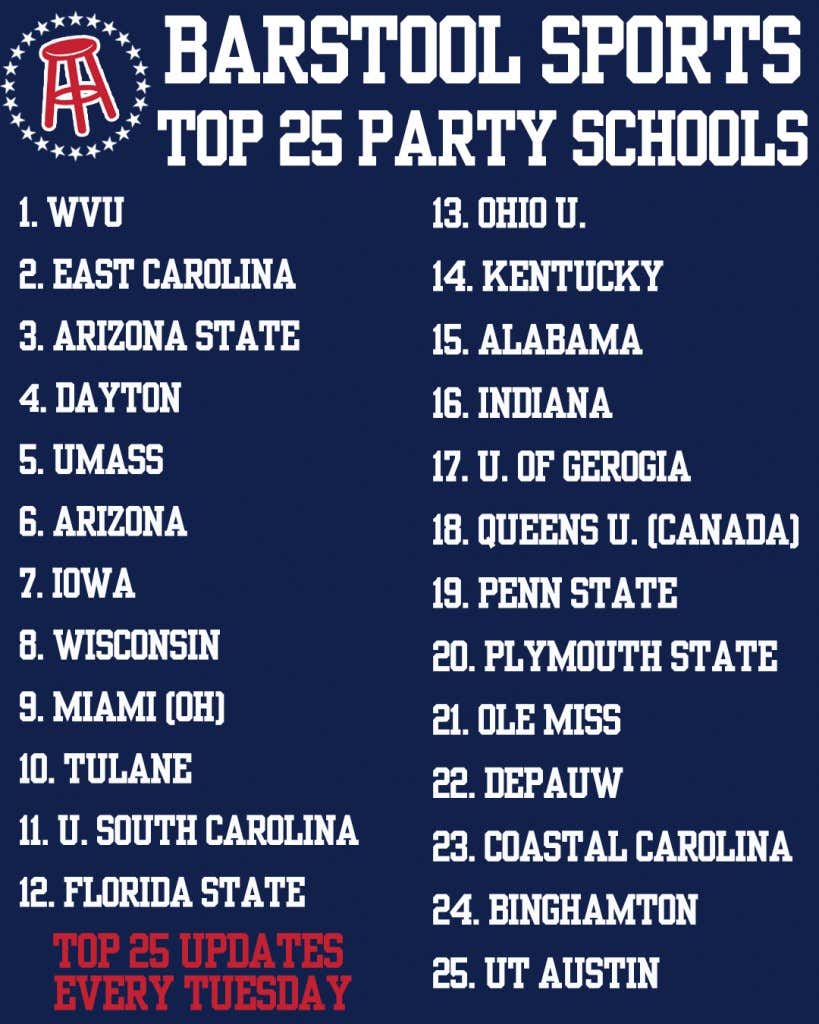 Thanks to being a state school located in Austin, it was hard to keep Texas off the list. Add in great tailgating, and you have a top 25 party school.

Not too far away from Bills Mafia in Buffalo, Binghamton is the gold standard for SUNY schools. Good enough to sneak them into the top 25.

Coastal Carolina is located where other people go to spring break: Myrtle Beach. Too good to not include.

The intramural basketball is good too:

No, not Depaul. Rumor has it that the weekend of the “Monon Bell” game (Depauw vs. Wabash) is one of the best weekends a college kid could experience.

Tailgating on The Grove is something every football fan should experience before they die.

Ole Miss should be higher, but the bars close at 1am on Fridays and midnight on Saturdays. Kind of lame, but your night does start early and end late.

The education may not be the best, but PSU often found themselves in the top 10 party schools via Playboy.

Champs is where dreams are made. Just ask Sophie Turner.

Ohhhhh Canada!!!!!! We had to throw in a Canadian school to show a little bit respect to our brothers up north. Queens takes the cake as the top party school in Canada, good enough for #18.

From Old Row Jimmy, “Athens is almost scientifically proven to be the best college town in America. That place is sweet. There’s something like 80 bars in Athens.”

The term Old Row comes from the 6 frat and 7 srat houses located right behind the football stadium. Doesn’t get better than Alabama if you’re into partying and sports.

Take it away, Brent Musburger:

SAKARLINA!!!! It may not have been the #1 school of anyone who decides to attend, but they make the best of their 4 years.

This may surprise some people, but Tulane being right next to Bourbon Street leads to a top 10 party school.

Possibly one of the best schools in America when you factor in location, sports, education, and partying.

Not much to do except cheer on your 9-3 football team and party. It’s no surprise that Iowa has been at the top of “Best Party Schools” lists since they were invented.

This video, of course, came from UMass

It’s not called ZooMass for no reason.

The smokes don’t hurt either

ECU is often called the ASU of the east. It may be time to start calling ASU the ECU of the West.

Along with the top 25, we’ll have a bottom 5 every week. These are the worst 5 party schools in the country that students go to expecting a party school but end up disappointed (schools like BYU not included).

When you hear about a school in Orlando with 50k+ students, you think it has the potential to be one of the greatest party schools in America. The problem? The entire school commutes.

Sex and fun are pretty much against the rules. If you like going to the same 3 bars your entire college career, I guess it’s the place for you.

This school is “the citadel of American conservatism.” Greek life is allowed, but alcohol is not allowed to be served at any parties. Any party that is thrown by greek life must be attended by a “party monitor.”

I’m pretty sure you’re required to take a bible everywhere you go on this campus. There are curfews for most dorms. That’s not college.

Dorms are separated by gender. You can’t go into the opposite genders dorm past 11 PM. Being ranked #1 is thanks to the potential this college has.