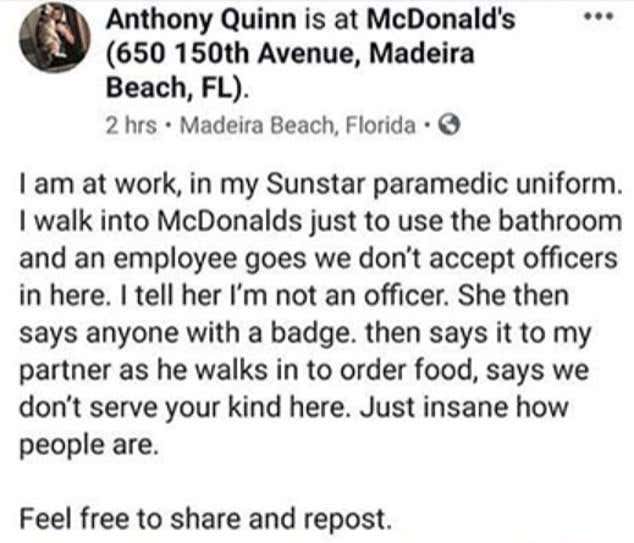 Source – A paramedic in Florida says a Mcdonald’s employee told him his “kind” wasn’t served there, WTSP reports.

The employee is now “no longer with the organization,” according to a statement McDonald’s gave.

The employee told the paramedic that they “don’t accept officers in here” when he wore his uniform into the McDonald’s to use the bathroom.

After the man said he wasn’t an officer, the employee replied that anyone with a badge doesn’t get served.

The man says his partner was also denied service.

“We are aware of this unfortunate incident that took place at one of our restaurants. We, like you, were upset and disappointed and took immediate action. What occurred does not reflect the values of our brand or our franchise, or the love and admiration we have demonstrated consistently for our friends in law enforcement and first responders. We have reached out to offer our apology.”– The Casper Organization.

First of all, all the credit in the world should go to McDonald’s for doing the right thing here. And if you think what they did is so obviously the right thing that they don’t deserve credit since they were just righting an absolute wrong, allow me to welcome you to the world, 2019. Where “right” is a rare commodity and even the most powerful megacorporations exist in this weird, undefined No Man’s Land of fear and timidity when it comes to offending anybody.

Anyone who’s going to take a slightly-above-minimum-wage job in order to commit blatant discrimination is, by definition, a fringe lunatic. Which end of the social spectrum their particular fringe is located doesn’t matter; this ex-employee is a nutjob. And nutjobs travel in packs. Tell one of them to put down the spatula or the mop and get the hell out of your establishment and you risk having hundreds of like-minded radical kooks showing up to make your life miserable. Whether said kooks are wearing berets and Che Guevara t-shirts or trucker hats and denim vests with Confederate flags on them. So risking all that in the name of simple justice is a bold move today. Common sense is very uncommon at a moment in time like this.

Secondly, can someone explain to me the logic behind not wanting people with badges of any kind in your establishment? In an age when we can’t go 24 hours without some disassociated, sociopathic maniac walking into crowded places and opening fire, wouldn’t you want as many badged first responders in your place as possible? Whether they’re carrying guns like the ones who rushed toward the El Paso gunman at great personal risk to themselves:

Or the ones like these guys at the McDonald’s who are experts in emergency medical care. Hell, I wouldn’t care if the badge says BIKINI INSPECTOR, I’d assume you’d want to be surrounded by them. But that’s probably naive of me. Some real 2009 thinking on my part and the world has changed in 10 years. I just wonder who this ex-fast food worker is going to call the next time he or she gets robbed.