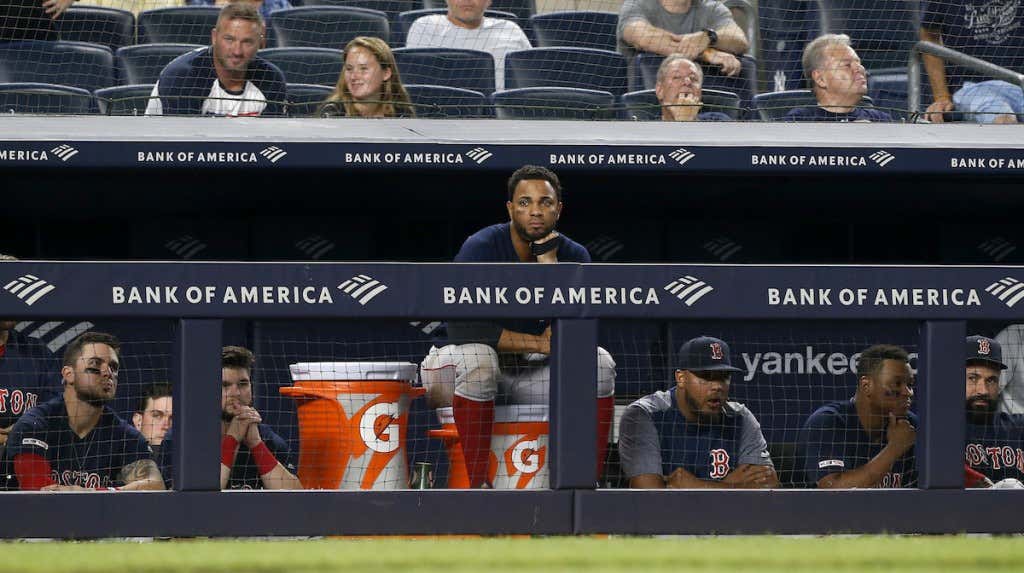 Last Sunday, the Red Sox went into their series finale against New York with a share of the second Wild Card spot, looking to complete a four-game sweep of the first-place Yankees. They haven’t won a game since. Eight straight losses. Eight.

I’ve kind of been banking on the whole “there’s still two months left in the season” thing, but at 6.5 games back of the second Wild Card, even that’s looking pretty unrealistic at this juncture. I’m sure many of you feel like this four-game sweep at the hands of the Yankees was the final nail in the 2019 Red Sox’ coffin, but with 10 of their next 13 games coming against the Royals, Angels and Orioles, I would say hold on to that final nail for just a second.

That being said, this is the worst I’ve seen a Red Sox team perform since their last place finish in 2015, but this, as you know, is not a last place team. Hell, they might just be a third place team that misses the playoffs entirely. That’s the most likely scenario at the moment. But there’s still plenty of season left with very beatable teams remaining on the schedule. I think the correct viewpoint is more along the lines of, what’s the point of rallying over the last two months just to sneak into the Wild Card game and the best case scenario being getting dusted by whoever they match up with beyond that.

I’m honestly just dumbfounded as to how we got here. Not having a closer at any point during the season is sure as hell a big reason why, but when you take a step back, it’s really been the starters. The Red Sox haven’t had to worry about who’s closing out games in the ninth, because they haven’t had any leads to protect once they’ve gotten there. Since June 22, the Red Sox are hitting .295 with an .871 OPS as a team. That’s the highest batting average and second highest OPS in the majors over that 37-game span. They’ve gone 17-20 over those 37 games. Only the Mariners, Royals, White Sox, and Tigers have been worse in the American League. For the record, all those teams suck.

Over those 37 games, Red Sox starters have a 6.26 ERA, second worst ERA in the majors. The only rotation that’s been worse? The Yankees (6.54 ERA), yet somehow they’ve gone 24-12 over that stretch. Go figure. David Price and Chris Sale have combined to have a 6.72 ERA in their last 15 starts. Those are the guys that are getting paid the big bucks to win baseball games, yet they’ve done anything but that, especially Sale.

The worst part is that Price got knocked around for seven earned runs in two and two thirds innings by a Yankee lineup that would’ve had spring training attendees pissed off about the lack of star power. No Gary Sanchez, no Luke Voit, no Aaron Hicks, no Edwin Encarnacion, no Giancarlo Stanton, DJ LeMahieu didn’t start and only got one at-bat. To get shelled by that lineup is…well, it’s embarrassing. This series was embarrassing, this eight-game losing streak is embarrassing, and this season, for the most part, has been embarrassing.