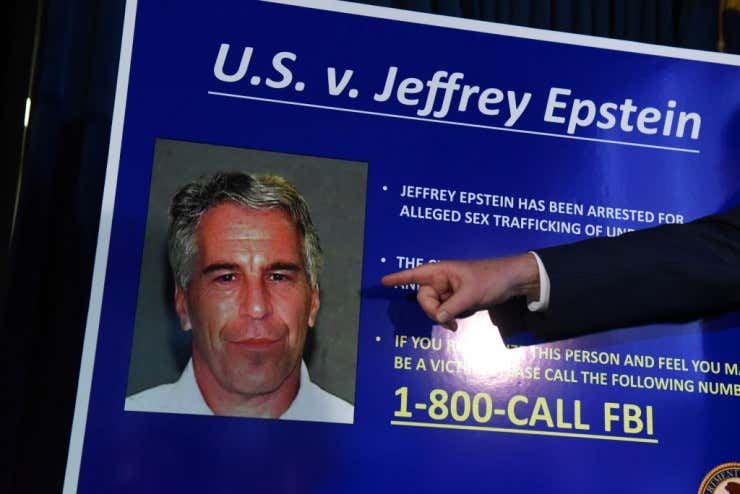 NY Times – Jeffrey E. Epstein, the wealthy financier who is accused of sex trafficking, had an unusual dream: He hoped to seed the human race with his DNA by impregnating women at his vast New Mexico ranch.

Mr. Epstein over the years confided to scientists and others about his scheme, according to four people familiar with his thinking. …

Mr. Epstein attracted a glittering array of prominent scientists. They included the Nobel Prize-winning physicist Murray Gell-Mann, who discovered the quark; the theoretical physicist and best-selling author Stephen Hawking; the paleontologist and evolutionary biologist Stephen Jay Gould; Oliver Sacks, the neurologist and best-selling author; George M. Church, a molecular engineer who has worked to identify genes that could be altered to create superior humans; and the M.I.T. theoretical physicist Frank Wilczek, a Nobel laureate.

The lure for some of the scientists was Mr. Epstein’s money. He dangled financing for their pet projects. …

On multiple occasions starting in the early 2000s, Mr. Epstein told scientists and businessmen about his ambitions to use his New Mexico ranch as a base where women would be inseminated with his sperm and would give birth to his babies, according to two award-winning scientists and an adviser to large companies and wealthy individuals, all of whom Mr. Epstein told about it. …

According to [Jaron] Lanier, [a] NASA scientist said Mr. Epstein had based his idea for a baby ranch on accounts of the Repository for Germinal Choice, which was to be stocked with the sperm of Nobel laureates who wanted to strengthen the human gene pool. (Only one Nobel Prize winner has acknowledged contributing sperm to it. The repository discontinued operations in 1999.)

Mr. Lanier, the virtual-reality creator and author, said he had the impression that Mr. Epstein was using the dinner parties — where some guests were attractive women with impressive academic credentials — to screen candidates to bear Mr. Epstein’s children. …

One adherent of transhumanism said that he and Mr. Epstein discussed the financier’s interest in cryonics, an unproven science in which people’s bodies are frozen to be brought back to life in the future. Mr. Epstein told this person that he wanted his head and penis to be frozen.

Let’s admit it. Jeffrey Epstein had us all fooled. We thought he was merely the world’s worst pedophile. An uber creep who used his billions not to fund scientific research, build hospitals, cure diseases, develop clean energy, send people into space or build Iron Man suits like a normal billionaire. But to buy Pedophile Island, fly there in the Lolita Express, suck up to some of the most power and connected people in the world and create a network of underlings who aided and abetted him while he molested underage girls by the hundreds. It turns out that, while he is all that, he is something else entirely.

Jeffrey Epstein is a supervillain.

How else can you describe a guy who wants to reshape the human genome in his own image? To populate the world with a master race, descended from a single male and super intelligent females? To create a new human species of depraved, child-raping, horse-faced perverts with good genetics on their mother’s side? By definition that is a master plan of a supervillain if every I heard one.

I’d like to compare him to Lex Luthor, Stavros Blofeld or Dr. Evil. But really all they ever wanted was all the money and their arch nemesis dead. Even those three maniacal cueball-headed fucks would’ve thought this idea is twisted beyond all comprehension. And Dr. Evil was into cryogenics. No, this is pretty much the last 10 minutes of “Dr. Strangelove.” When all the generals and cabinet members are waiting for the nuclear holocaust and come up with a plan where they ride it out in an underground bunker in the mountains, surrounded by females of childbearing age so they can repopulate the world.

And yet, the scariest part of all of this is that because Epstein is so rich, he was able to get the world’s smartest people to listen to this evil, hare-brained scheme without any of them speaking up and saying “The fuck is wrong with you?” Nobel Prize laureates. Physicists. Biologists. Neurologists. Engineers. Literal rocket scientists. All listened to this wretched scumbag and pretended he was making sense instead of laughing in his face and leaving. Whoring themselves out in hopes he’d fund their next radio telescope or particle collider. Or – God help us – maybe even so they’d get invited to his next party he planned on throwing to get “massages” from someone else’s teenage daughter.

I shudder at the thought of that. But if we’ve learned anything from Jeffrey Epstein’s life, when there’s billions of dollars involved and people can buy their way out of anything, they are capable of anything. Is there any chance we can freeze his penis like right now?