Because of our ZeroBlog30 podcast, a lot of people had been tagging me in this story and I’ve gotta say I did a double take. This seemed like a headline from The Onion… But the more I look into it, the crazier this gets.

The Army did, indeed, blow up the body of 73-year-old Doris Stauffer, and it turns out there’s a whole mess of other cases like hers… It’s the result of the dark, largely unregulated underworld of “Non-Transplant Tissue Banks” also known as “Body Brokers”. Families think they’re donating loved ones’ bodies to specific science research, but in what seems like a horror film, they often end up getting, for lack of a better term, ‘chopped up’… and sent off for experiments while the ‘Body Brokers’ reap a payday.

So back to the case of Ms. Stauffer….

When she passed in 2013 after suffering from Alzheimer’s, her son Jim Stauffer hoped to donate her brain to Phoenix’s “Biological Research Center” (BRC) so it “could be used by doctors to learn more about the disease, but he says that is not what happened”…

According to Reuters, Stauffer’s mom was one of many bodies sold to the US Army for blast testing.

“She was then supposedly strapped in a chair on some sort of apparatus, and a detonation took place underneath her to basically kind of get an idea of what the human body goes through when a vehicle is hit by an IED.”

“There was actually wording on this paperwork about performing this stuff,” he added. “Performing these medical tests that may involve explosions, and we said no. We checked the ‘no’ box on all that.” 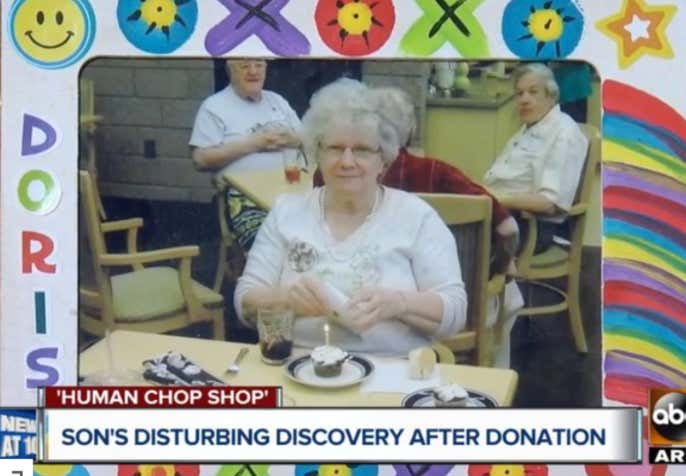 Looking at the photo of Doris with her cotton candy hair, sweet face, a little cupcake in her hands… this lady could be anyone’s Grandma. And if someone did this to my Grandma I would lose my ever-loving mind. Hey, you wanna donate your body to the military to get blown up? Go to town, Smithereens City. But to have this done without the family’s consent? Hellll no.

Here’s more from the Reuters report, which I highly recommend checking out if you have the time:

As Reuters reported last year, BRC also sold body parts to U.S. Army contractors for military experiments. A Pentagon spokeswoman said BRC provided the body parts “under false pretenses,” misleading the Army that consent had been secured for donors to be used in destructive tests.

Among the parts BRC sold for the Army experiments were the heads and spines of Conrad Patrick and Leon Small, a 71-year-old retiree who had once managed a furniture factory.

On the consent forms Patrick and Small signed, each man checked a box stating that he did not wish to be used in military or destructive tests, records show.

Bodies or parts from at least 20 BRC donors were used without their consent in Army experiments, Doris being one of them.

The military halted testing when it learned of the raid at BRC.

And that BRC place sounds like Leatherface’s basement from the Texas Chainsaw Massacre. Via People Magazine:

Former Phoenix FBI special agent Mark Cwynar testified as part of the lawsuit that he saw buckets full of body parts, “cooler filled with male genitalia,” body parts belonging to different people sewn together and hung up on the wall and piles of unidentified bodies on the ground.

According to the lawsuit, on one wall, Cwynar recalled seeing a woman’s head sewn onto a male torso “like Frankenstein” in what the suit says appeared to be a “morbid joke.”
The lawsuit alleges that “pools of human blood and bodily fluids were found on the floor of the freezer,” and adds that bodies allegedly didn’t have identification tags.

Stephen Gore (perfect last name for him), the guy running this horror show, was only sentenced to one year of deferred jail time and four years of probation. Hopefully the afterlife holds something a little rougher for him. Perhaps Doris waiting to strap him into a Humvee and sending him through an eternal mine field.