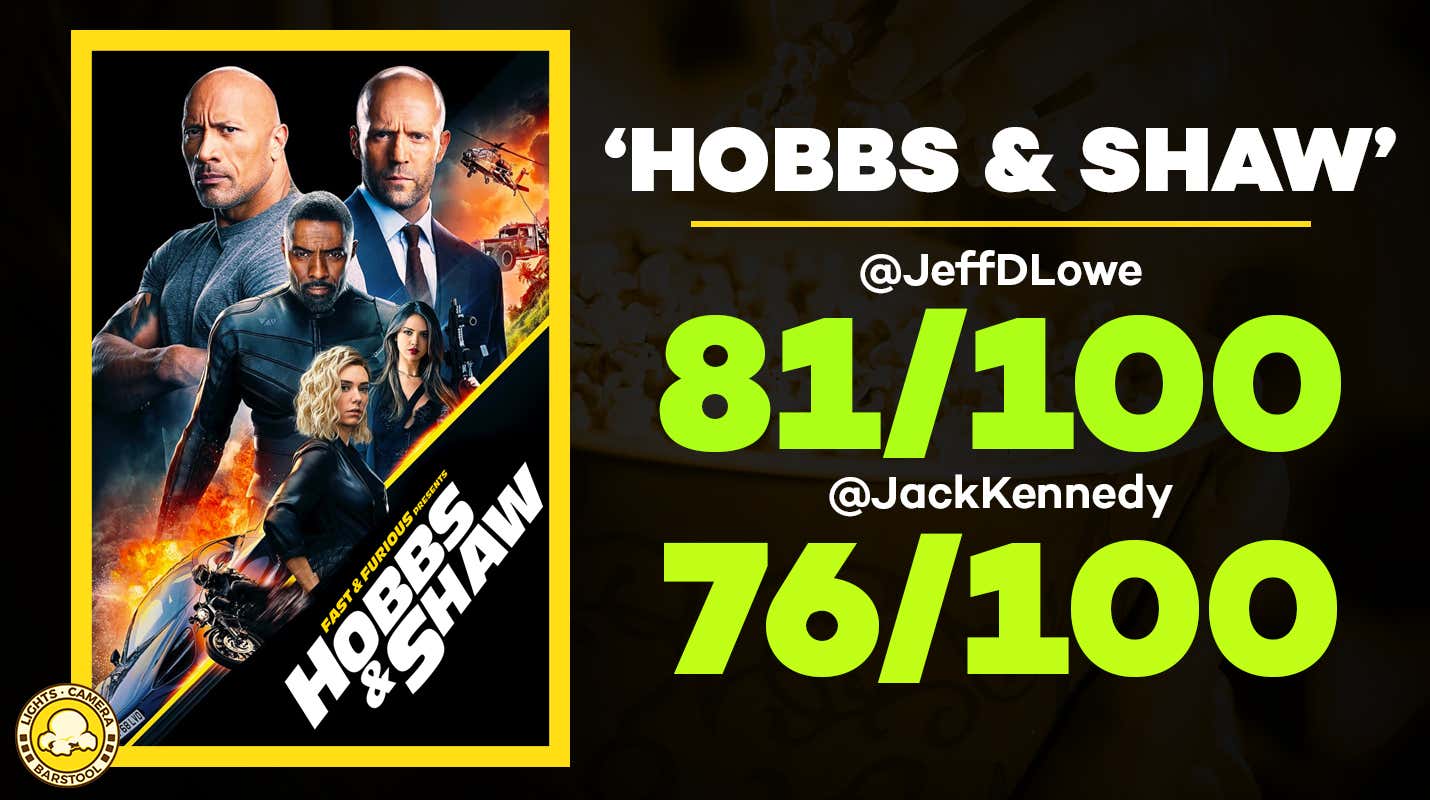 The first ‘Fast & Furious’ spin-off is here and it’s the perfect movie to end the summer with. Let’s review…

SYNOPSIS FOR CONTEXT: Ever since hulking lawman Hobbs (Johnson), a loyal agent of America’s Diplomatic Security Service, and lawless outcast Shaw (Statham), a former British military elite operative, first faced off in 2015’s Furious 7, the duo have swapped smack talk and body blows as they’ve tried to take each other down. But when cyber-genetically enhanced anarchist Brixton (Idris Elba) gains control of an insidious bio-threat that could alter humanity forever — and bests a brilliant and fearless rogue MI6 agent (The Crown’s Vanessa Kirby), who just happens to be Shaw’s sister — these two sworn enemies will have to partner up to bring down the only guy who might be badder than themselves. (via Google)

Jeff (81/100): ‘Hobbs & Shaw’ is an insane, action-packed buddy-style movie that might be the best in the ‘Fast & Furious’ franchise. Filled with tons of surprises, the irresistible duo of Dwayne “The Rock” Johnson and Jason Statham will have you wanting more from them for years to come.

In order to make anything in the ‘Fast & Furious’ franchise work, you need the perfect balance of over-the-top insanity and self-awareness. A few recently have done that, including ‘Fast Five’ and ‘Furious 7’ and you can add ‘Hobbs & Shaw’. The franchise’s first spin-off doesn’t pull back from making sure you know the movie is self-aware. Director David Leitch and the screenwriters infuse this movie with a really solid mix of comedic writing and moments. It’s no secret that the ‘Fast’ movies have strayed more into “world-saving action” than stealing VCRs, which can be a bit much at times. While I’d enjoy seeing The Rock and Statham tackle smaller-scale events, I have no complaints with the plot and story in this movie. I wouldn’t even call this dumb action, as they do a great job at explaining all of the technology, cars, and devices used in the movie. There aren’t as many “eye roll” moments as one would think with a movie like ‘Hobbs & Shaw’.

It’s not just The Rock and Statham who drive this movie, either. Idris Elba is an incredibly compelling villain and he hammers home one of the most fun roles of his career. In terms of our heroes, Vanessa Kirby (playing Statham’s character’s sister) keeps her streak going following last year’s gem ‘Mission: Impossible – Fallot’. It isn’t easy to stand out when personalities like The Rock and Statham, but Elba and Kirby do just that. Call it recency bias, but they’re two of the best additions to this universe that we have seen. (I was worried about his role based on ‘The Dark Tower’, but any concerns were thrown away very quickly)

Does ‘Hobbs & Shaw’ get a little too corny at times? Yes, and that’s to be expected. It’s not perfect and there are spots where it drags a bit. But like my ‘Godzilla: King of the Monsters’ review, I have to factor in what their intention was with making this movie. They cover up a lot of their flaws with nailing the intended vision with the spin-off.

Anyone who enjoys the ‘Fast & Furious’ franchise is going to have an absolute blast with the movie. It combines the heart and action you know and love and delivers some of the best laughs out of all nine movies. Your summer fun at the movies will not be complete until you see ‘Hobbs & Shaw’.

KenJac (76/100): If ‘Mission Impossible: Fallout’ was written by John Woo and directed by Michael Bay, it would be called ‘Hobbs & Shaw’. It’s boilerplate, over-the-top action that’s only interrupted by exceedingly cheesy dialogue between the main duo. This may sound like I’m roasting the movie, but it’s sort of the opposite. ‘Hobbs & Shaw’ knows exactly what it is and I respect the hell out of that.

Dwayne Johnson and Jason Statham are, well, Dwayne Johnson & Jason Statham. They focus a lot more on humor in ‘Hobbs & Shaw’ than in the Fast & Furious movies, and it pays off. It takes the burden of dramatic acting off them and allows them to play to their strengths. Idris Elba KILLS IT as Brixton, the antagonist. He’s smooth, fast and an angry reminder to me that he somehow still hasn’t been picked to play James Bond. Vanessa Kirby is also a very welcome addition and is a great counterpart to Statham’s style of Mele fighting. There are also two tertiary characters introduced that are played by big, and I mean BIG actors. Can’t give it away without spoiling, but it’s a very exciting prospect for the future of the franchise.

The action is about as hyperbolic, improbable and insane as you can hope for. The practical effects meld with the special effects well, especially in some of the larger scale moments. The hand-to-hand combat moments, which is basically the whole movie, are also fantastic. There are gunfights, car chases, and a sweet HALO drop sequence to help make this into one of the more action-packed movies of the year. 2 hours and 15 minutes seem a bit long, but it really does fly by because they never let too much time lag by without a fight. Something I didn’t expect to like about this movie was the cinematography. Director David Leitch did an awesome job at highlighting each location natural aesthetic.

‘Hobbs & Shaw’ is a great summer blockbuster that is certainly worth watching in theaters. There’s plenty of action and humor, and a pretty dumbed-down plot that feels more loyal to the roots of the Fast franchise (minus the focus on, you know, cars). Go watch it and support a close personal friend of the pod Dwayne “The Rock” Johnson.

—
We will wait until next week to find out if this new movie is Officially Buttered. Large will join us to review the movie on Lights Camera Barstool, as well as rank all of Quentin Tarantino’s movies. Make sure to rate all 2019 and 2018 movies in the links below.