So last night things got WEIRD in Cincinnati. I mean there was the most talked about baseball brawl in quite some time

But, you also had this fan breaking the news of the trade to Jesse Winker – an outfielder for the Reds. It got me thinking. This has to be the coolest feeling as a fan. There’s nothing better than breaking news to someone (assuming it’s not terrible news). Now imagine you get to break it to a player of your favorite team about a major trade?

I would have loved to tell Kevin Knox that Kristaps was traded in the middle of the game. The best part is just how confused Winker is here. You can see him trying to figure it all out in his head 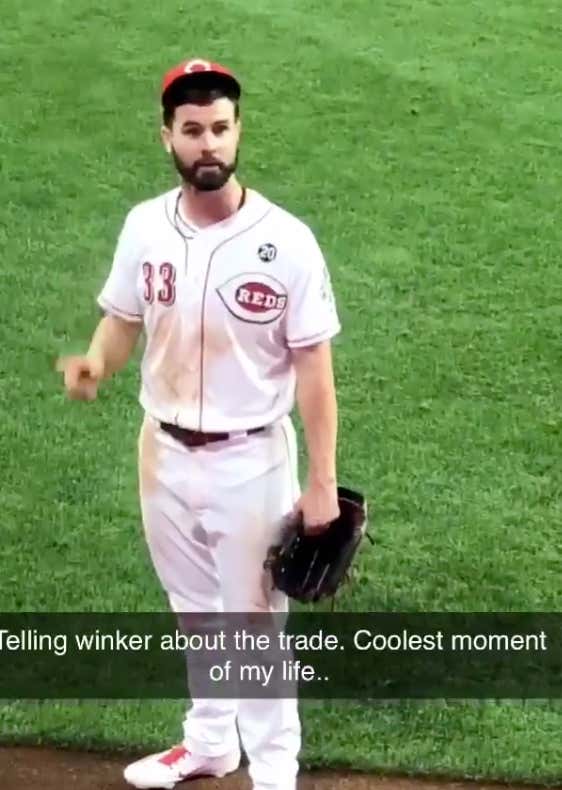 That’s the look of a guy realizing he’s going from Yasiel Puig being sleeveless and awesome to weirdo Trevor Bauer. He also might be realizing that he’s a mere moments away from a full on brawl. Either/or really.

Just going back to it, I stand by this. Telling a player during a game that someone got traded in what’s a major trade is an awesome feeling. It’s a rush to break news. It’s almost like a high when you get to tell someone something they don’t know. You get to sound smarter than that person for a second, like you’re an insider.

I might just start hanging around front rows of games in order to break the news to someone. I need to experience this.