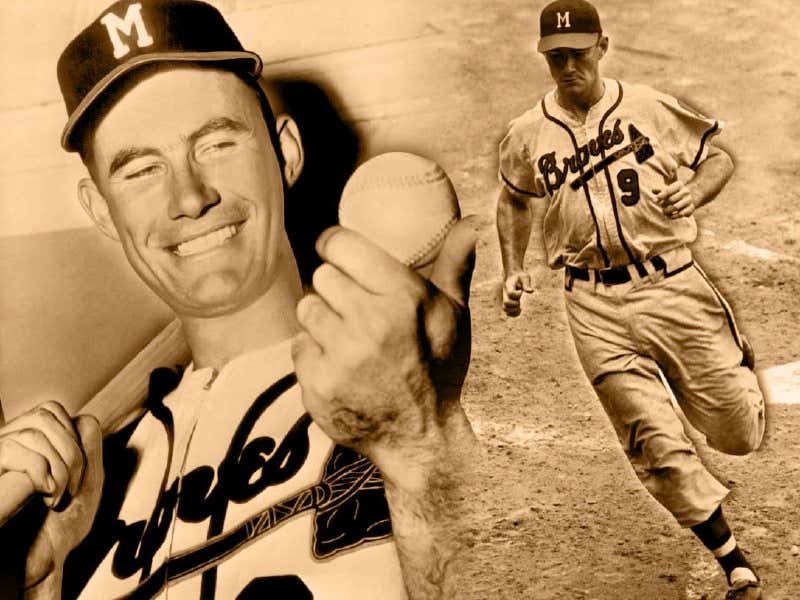 Joe Adcock of the Milwaukee Braves has one of the greatest individual performances in the history of baseball, hitting four home runs, and adding a double as Milwaukee slammed the Brooklyn Dodgers 15-7 at Ebbets Field. By adding a double to the four home runs, Adcock sets a single-game record with 18 total bases. A record that would stand until 2002 when it was topped by Shawn Green.

Joe Adcock was born on October 30, 1927, in Coushatta, Louisiana. Adcock never played baseball before attending LSU, where his natural ability led to him making the baseball team. This led to him getting signed by the Cincinnati Reds in 1947. A first baseman by trade, Addock played left field when he debuted with the Reds in 1950 and struggled as the Reds had Ted Kluszewski blocking him at first. Prior to the 1953 season, Joe Adcock as traded to the Milwaukee Braves as part of a four-team deal.

In Milwaukee, Joe Adcock got to play his natural position and excelled, hitting 18 home runs in 1953. A year later he would top 20 home runs for the first time ins his career batting fifth behind Braves super rookie Hank Aaron. As July came to an end, the Braves were in third place under Charlie Grimm at 54-45, while the Brooklyn Dodgers in Walt Alston’s first year were in second place at 61-40.

Jim Wilson started for Milwaukee, while Don Newcombe started for the Dodgers. Each team plated a run in the first as Eddie Matthews homered for Milwaukee, while Jim Gilliam had a leadoff double and scored on a single by Duke Snider. Joe Adcock hit the first of his four home runs leading off the second inning. Andy Pafko followed with a double and scored on a hit by Johnny Logan that sent Newcombe to the showers. Clem Labine came on and allowed an RBI double to Bill Bruton as the Braves built a 4-1 lead. Jim Wilson also did not make it out of the second inning as the Dodgers loaded the bases, but Lew Burdett came in and did not allow a run, striking out Rube Walker, while pinch hitter Walt Moryn hit into a double play.

Erv Palica came on to pitch for Brooklyn in the third and was greeted by a second home run by Matthews. Joe Adcock would later double and score on a single by Andy Pafko. While Burdett settled things down for the Braves, after a scoreless fourth, the Braves got two runners aboard as Matthews walked and Aaron singled as Joe Adcock homered for the second time to give Milwaukee a commanding 9-1 lead as Pete Wojey ended the inning on the mound for Brooklyn.

Don Hoak hit a Brooklyn home run in the sixth, but the Braves answered in the seventh inning as Adcock with his third long ball with Hank Aaron on base and Pafko went back-to-back to make it 12-2. In the eighth inning, the Dodgers finally got to Lew Burdett, scoring four runs highlighted by home runs by Gil Hodges and Rube Walker. In the ninth inning, Joe Adcock led off with his fourth home run, becoming the first player with 18 total bases in a game. The Braves would add two more runs off Johnny Podres. The Dodgers would score once in the ninth following a Sandy Amoros triple for the final score of 15-7.

Joe Adcock’s day was simply one of the best in baseball history, five-for-five, four home runs, a double, 18 total bases, with five runs scored and seven RBI. The 18 total bases remained a single-game record for 48 years until it was topped by Shawn Green of the Los Angeles Dodgers against the Milwaukee Brewers in 2002 at Miller Park.