Hey Max Kellerman, take a hike pal. Your ass just got Wally Pipp’d by Michael Irvin and it’s not even close. I don’t know about you, but I love a good old fashion Stephen A rant and my friends this right here was some Grade A stuff. Don’t you dare even suggest the idea that Jarvis Landry/OBJ are the same thing as LeBron/Wade. Not on Stephen A’s watch, not now not ever. Few people on the planet can match the GOAT Stephen A when it comes to electricity and entertainment but you know what, Michael Irvin may be that man. I’ll be honest I had no idea what the hell he was talking about but I do know I was wildly entertained which is the whole point last time I checked. I don’t know if they both went skiing this morning or what but I know I would much rather watch these two go at it than whatever Max Kellerman does and I feel like I’m not alone with that line of thinking.

Watching in real time as Stephen A’s brain started to comprehend the blasphemy that was coming out of Michael Irvin’s mouth was priceless. I don’t care if the reaction was all for show, a rant like that is why he’s the best in the business and worth the billion dollar salary he’s about to get. It’s impossible to watch that clip and now be entertained, Stephen A dug deep and brought out the goods like only he can. Michael Irvin has to know if you come at the king you best not miss and as expected he got his ass kicked. This face tells you everything you need to know, Irvin knew he fucked up and made a big time mistake 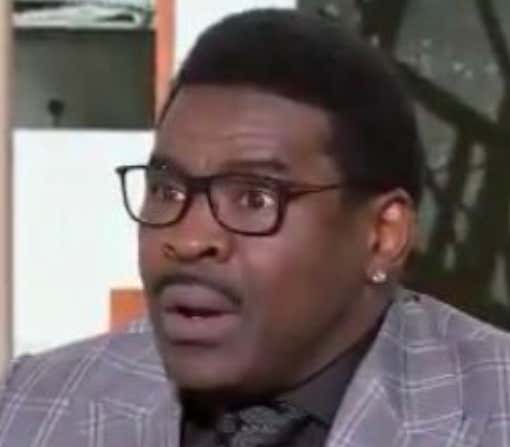 All I know is after watching that 2 minute clip, Max Kellerman is fucking out and Michael Irvin is in.