I am sure most fanbases wouldn’t want to hear that a guy their team just traded two of their Top 10 prospects for lost his shit when he found out he was going to said team. However, as a very rational Mets fan, I couldn’t be happier. I want players that are traded to the Mets to know what comes along with putting on that orange and blue uniform. Namely that you have to deal with a middling chucklehead owner that will cheap out when it truly matters instead of going all-in like any true big market team would.

Based on what we’ve seen recently, your stats will likely take a hit because the team will mismanage you and injuries that seem minor will become major to the point you may disappear altogether (See: Jed Lowrie. No literally, do you see Jed Lowrie? Because I think the Mets lost him like a piece of luggage). And finally you will have to deal with asshole Chicken Little fans like me that have been so beaten down over the years, we think that the sky is always falling. Granted, my roof currently has a giant hole in it from the amount of long balls the bullpen has given up despite being told how great Edwin Diaz was by AL fans. The Mets may be a hated team by fans of other NL East teams and weirdo Yankees fans that obsess with the little brother franchise of the city. But I can assure you from experience that no fans hate the Mets more than Mets fans. Which is why there is no doubt in my mind that Mets fans heard about this “commotion” and immediately broke out into this chant.

So for a competitive dude like Marcus Stroman to have reacted any other way to finding out he was going to a 4th place team that is seven games under .500 instead of one of the best teams in baseball would have been the real story. Name me a player that doesn’t scream and take a cut at the Gatorade cooler after finding out he’s been sent to Flushing instead of the Bronx, especially with this little fun fact attached.

Instead, Stroman reacted like any other native New Yorker would react to finding out they got sent to New York City’s Minor League team of the Majors. Oh you didn’t know Marcus was from New York? Well you better get used to hearing that as much as you heard that Todd Frazier is from New Jersey a few years ago.

That being said, I couldn’t be happier that Marcus is here for a plethora of reasons. He is a good pitcher, a crazy person on the mound, has no problem chirping his own shitty franchise on Twitter, and has already won on the biggest of stages.

Also it cannot be understated just how wonderful it is that Stroman going to the Mets did this to Hubbs.

However on the flipside, I am really going to miss Anthony Kay because he was killing it in Double-A this year and I always have a special spot in my heart for people that follow Barstool. 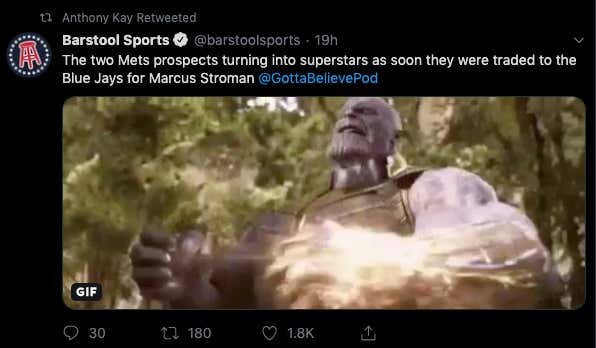 Sidenote: I feel for kids that didn’t grow up with Summer Sanders in their life. From Figure It Out to Inside Stuff to an Olympic gold medalist. She was as close to a queen as 90s American kids had.