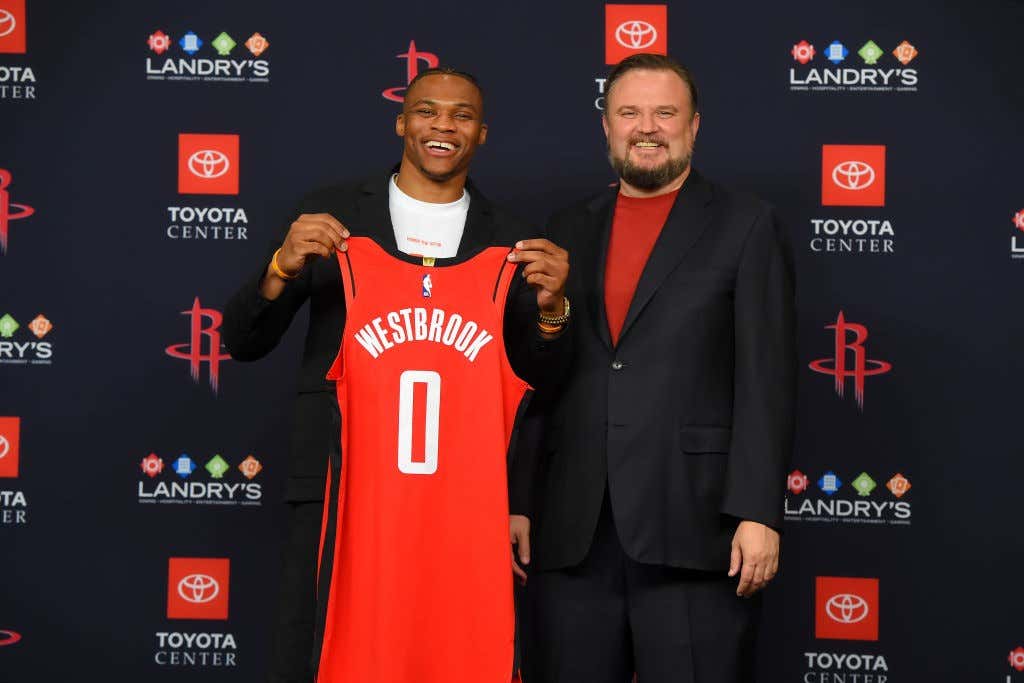 Over the weekend the Houston Chronicle gave us a play by play of how Daryl Morey and his gigantic steel testicles pulled off the latest blockbuster trade of what has been an incredible NBA offseason. It was something not a person alive saw coming, especially with how open he was about not trading Chris Paul, and now that we have the details of how it all went down I found it pretty damn fascinating.

Trades like these are usually things we on the internet do with the ESPN Trade Machine just because the money lines up, but they rarely ever happen in real life. I think we all try and pretend we could be a GM of an NBA team even though each and every one of us would suck at it, so hearing how one of the best in the business pulled off another gigantic trade for his franchise was really cool. The fact that it all went down in an Uber is even better.

No one thought the deal was dead, but it did not seem imminent, either. There seemed to be no reason to stay at the Golden Nugget, so Rockets general manager Daryl Morey and executive vice president Rafael Stone decided to grab an Uber and head to the Rockets’ summer league game in Las Vegas.

In the course of that 20-minute ride — with Morey and Stone on their phones and the Uber driver, air pods in place, blissfully oblivious that an NBA-shaking trade to send Russell Westbrook to the Rockets was coming together in his back seat — the deal moved from dormant to done.

Imagine being that Uber driver? Let’s say he knew who Morey was, that was probably already a pretty cool feeling with the whole league in town. To think that while you were driving this dude around he was pulling off a gigantic blockbuster trade is pretty funny. Do you think there was small talk? This driver is trying to bullshit as Morey is negotiating over picks? I don’t know why but that whole scene makes me laugh.

The story continues that this whole thing started with Morey out to dinner when he heard about the Paul George trade and that’s when like a shark who smells blood he hit up his owner that the Thunder may be ready to blow it up. Harden hit Morey up saying he already talked to Westbrook and they were off and running. What I found interesting was the first time Morey contacted Sam Presti he didn’t even ask about Westbrook

That afternoon, Morey called Presti, speaking only in general terms. He did not make an offer. He did not specify interest in Westbrook.

“Most deals happen when you’re trying to find out what the other side is trying to do,” Morey said. “Got a sense of what they were trying to do. It seemed there could be a fit.”

Remember at the time the only other real rumor we heard about was the Heat. Given Westbrook’s salary it’s not as if he had a gigantic market so obviously Morey wasn’t in a rush. I feel like other GMs who may be hungry for a star would do whatever they could, offer anything OKC wanted in order to land a player like Westbrook, but there’s one key part of the whole negotiating process that was key for Houston moving forward

“The big thing for us was making sure our remaining firsts were still very tradable because we’re trying to go all-in,” Morey said. “We’re not going to give them away. But if there was a deal that we thought could really help the team, we wanted to make sure we still had two firsts.

Shout out Daryl Morey for still being one of the few GMs who still give a shit about first round picks. It helps that Presti appears to not be a stickler for high picks but so often we see trades where there are protections and then that pick moves on to future years. That can hamper a team like HOU who is in win now mode and may need that future pick to land a missing piece.

In the end, it took 6 days for Morey to land Westbrook which is a much different timeline than the work he had to put in to land James Harden. As someone who loves this stuff I can’t get enough of these behind the scenes type stories and now all that’s left is for us to sit back and wait to see if it all works out. The one thing we know though is I highlight doubt Daryl Morey is done, especially in a wide open season like we’re about to have.