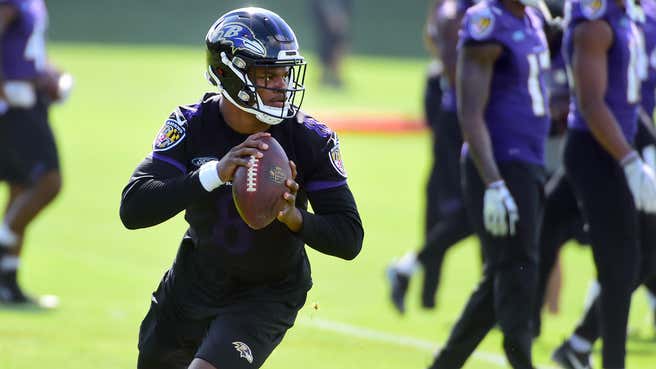 Yes, today is the day. We’ve waited months and months and months for football. We’ve endured free agency, trades, draft combines, the draft itself, rookie camps, OTA’s, etc etc etc. All of it with the bittersweet taste of a divisional title and a disappointing home playoff loss in our mouths. We’ve said goodbye to an elite QB and a couple of defensive leaders, and hello to a future superstar WR and a new offensive system. We’ve had months and months to ponder and reflect and debate the future of this franchise now that it lies in the hands of Lamar Jackson. All of that is exciting stuff but hardly any of it is actual FOOTBALL.

Part of the beauty of the NFL is the scarcity of real action on the field. We invest so much time and focus and money into our teams with the hope that a handful of Sundays in the fall will go our way. 3 hours a Sunday, 16 Sundays a year. And if all goes right, hopefully we get a few more of those Sundays in the cold of winter. We’re talking at a MAXIMUM, 60 hours a year of meaningful action for our respective teams. Now let me do some math here…. mhmmm… yes….

…and rounding up to the next hundredth, that’s exactly 0.69% of your entire year spent watching your team play football.

The NFL has somehow figured out that 0.69% is the exact amount of football that captivates the minds of America where they spend the other 99.31% of the time thinking about football. Wanting football. Craving football. Needing football. You ever yearned? You better believe you’ve yearned. Yearned for football, baby.

Just think about that. 0.69%. It’s poetry. It’s perfection. It’s brilliance. You with me? Yeah you’re with me.

So while yes, training camp isn’t quite part of that 0.69%, it is definitely a step in the right direction. We’re getting closer to the real deal. That 99.31% is getting better and better with every training camp highlight that makes its way onto the internet. We’ve already got Lamar Jackson with some good ol’ fashioned deep balls.

Mmmm love a good deep ball video. Especially when it’s grainy and filmed horizontally. Really gives it that amateur feel. I’m worked up in a lather just thinking about all those deep balls we’re gonna watch throughout camp.

Soon enough it’ll be preseason week 1, and we’ll get a taste of that brand new Lamar Jackson-led offense that Greg Roman has been working up. Maybe even get Hollywood Brown out there and catch a glimpse of him too. We’ll have position battles, difficult cut decisions, and hopefully NO INJURIES as we get closer to that 0.69%. Can’t have anyone pulling any groins out there. The drama is what training camp is all about, and it’s finally arrived. I’ll be right here blogging it every step of the way as we get closer to starting our defense of the AFC North crown.