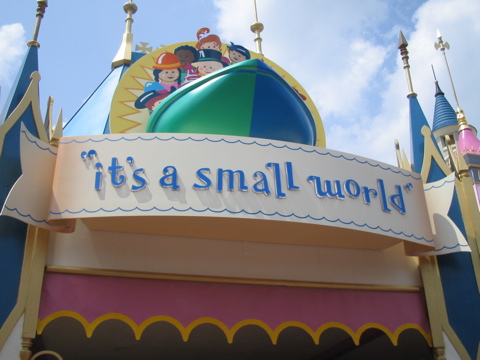 DM – A disabled man was awarded $8,000 by Disneyland after the It’s A Small World ride broke, stranding him for 30 minutes while the theme song played on a loop. Lawyer David Geffen says Jose Martinez was the only passenger not rescued when the ride broke down in 2009, and staffers failed to call the fire department to free him. .. Martinez uses a wheelchair, suffers from panic attacks and high blood pressure, and needed to urinate for much of the time he was stranded on the popular ride in the Fantasyland area of the amusement park. Geffen says half the award ordered Friday is for pain and suffering, and the other half for disability law violations. .. The man’s chronic health conditions became an issue as he sat stranded in the boat with the ‘Small World’ tune playing over and over again, according to the attorney. ‘He was half in the cave of the ride and half out,’ Geffen said. ‘The music was blaring. They couldn’t get it to go off.’

$8,000?  Jose Martinez was stuck on “It’s a Small World” for a half hour and he gets $8,000?  There have been a lot of frivolous lawsuits and ridiculous settlements in our lifetimes, but this has to be the worst settlement in the history of jurisprudence.  8,000 bucks, my ass.  Anyone who’s ever been on that ride will tell you he deserved at least $8 million.  “It’s a Small World” is not an amusement park attraction, it’s a descent into madness.  That goddamned song drills a hole through your ear, embeds itself in your subconscious, festers and grows until it will drive the sanest man in the world insane.  My Irish Rose and I took No. 1 son to Disney when he was like 2 1/2, which was way too young.  Every ride was either too fast and terrifying or too dark and scary.  The one exception was “IASW.”  To a little kid, it’s calming and non-threatening.  To an adult?  It’s a dystopian hellscape, filled with creepy little animatronic racist stereotypes singing the most cloying song ever written on continuous loop.  10 minutes in there and I came out permanently scarred with PTSD.  I still have an eye tic from it after all these years.  Seriously, if Al Qaeda ever wanted me to betray my country, they’d only have to threaten to send me through that nightmare again and I’ll spill my guts in an instant.  $8,000 for 30 minutes of that hell?  Disney got off cheap.  @JerryThornton1

Click on the video if you dare. But don’t say I didn’t warn you: