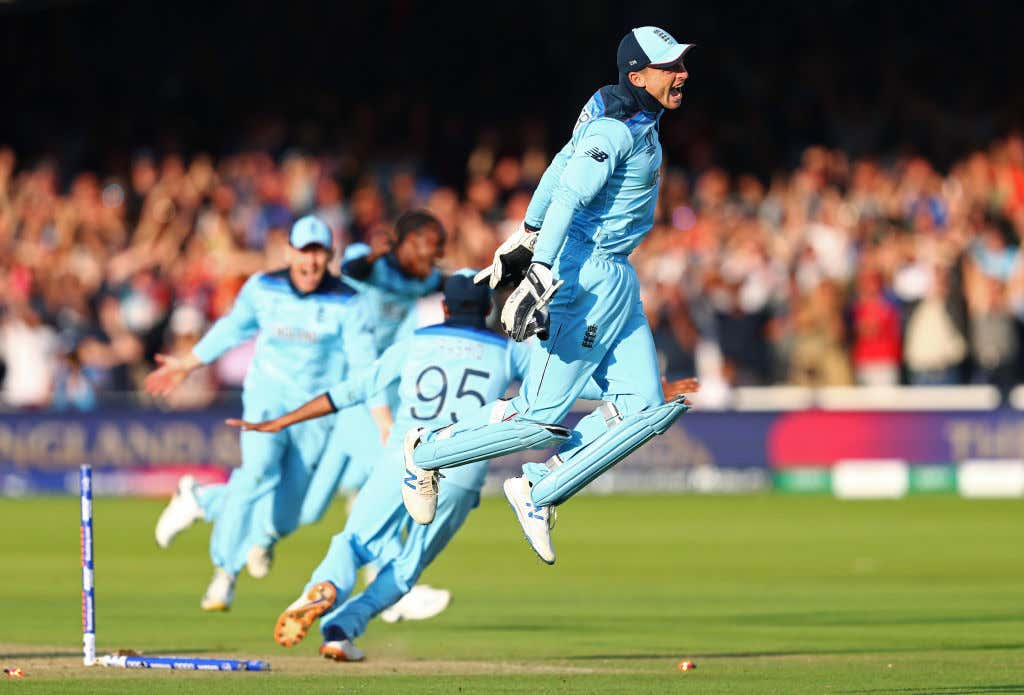 A few months ago I said it was my goal to learn how to understand cricket. So a little update here….I haven’t quite accomplished my goal yet. I still have no idea about anything that goes on in the game. With that being said–I think I have at least Googled shit about the game enough to know more about cricket than the normal American. So with that being the case, I can consider myself to be an American cricket expert. And as the resident cricket expert here at Barstool Sports [dot] com, I feel totally confident in saying that yesterday’s Cricket World Cup Final match between England and New Zealand was one of the most ridiculous games ever played.

Now I will say that the one thing I hate about cricket is the terminology. I understand that there are billions of cricket fans in the world but I still think that they should make it easier for Americans to understand what the hell is going on here. So if you were confused as to what a “Super Over” means, it seems to me like it’s just an overtime. The game was tied at the end of regulation, they went to overtime, but that’s called a Super Over in cricket. Don’t get me wrong. I think that “Super Over” is a bad ass term and wouldn’t mind if we replaced the term overtime with it, but it’s got to be one or the other. We can’t have both terms floating around out there. It’s too confusing. But yeah, the match went to a Super Over and the fact that it made it to overtime in the first place was insane. Mainly because of this controversial play from England’s Ben Stokes.

So in cricket you score runs by having 2 runners go back and forth between the stumps. Each time one of the runners makes it to the other side safely, a run is awarded. If you hit what we would consider a home run in baseball, you earn 6 runs. To get the runners out, the fielding team has to hit the stumps with the ball. So on this particular play, you see Ben Stokes diving for the stumps which would have been awarded 4 runs if he was safe. But the ball deflects off of his bat and goes all the way to the boundary. Which I guess would be like an error in baseball. Now since I don’t know shit about the rules for cricket, I have no idea what the procedure here would be. A lot of people are saying that he should have only been awarded one extra run for a total of 5 runs on the play. But the final ruling was that since the ball made it to the boundary, Ben Stokes would be given the 6 runs. So two extra runs because of the deflection instead of just one. Which obviously makes a pretty big difference when the game ends in a tie.

Then we get to the Super Over. England batted first and they scored 15 runs in their over. Then it was New Zealand. They needed 16 runs for the win. And when it came down to the last ball, they needed just 2 more runs. And here’s how that shit played out.

They needed 2. They got 1. But came up just a yard or two short of the win on that last dive. So now I know what you’re probably saying to yourself. “Uhhhh well if they got 1 run right there, wouldn’t the Super Over have been 15-15? Isn’t the game still tied? Why wouldn’t they just go to another Super Over?”. Which would make a ton of sense but apparently that’s not how things go at the Cricket World Cup. Apparently if the Super Over ends in a tie, whichever team hit more boundaries throughout the entirety of the match would win. And since England hit more boundaries and New Zealand didn’t score 16 runs in the Super Over, England is your 2019 Cricket World Cup Champions.

I’m sure that there are some details I got wrong there but I think that’s pretty much how it went. Drama, controversy, this match had it all. And between the Cricket World Cup Final going to a Super Over and the Wimbledon Men’s Final going to a tie-break in the 5th set, I’d say it was a pretty wild day in sports yesterday. Not too bad for a Sunday in July. Goddammit we need football back.