Earlier in the Spring this happened:

And now the verdict is finally in:

Charges have been dropped against a mother who let her 3-year-old pee in a gas station parking lot.

The case was dismissed Thursday, with the state’s representative saying in court that the law didn’t fit in this situation.

“The mom was trying to be a good mom,” lawyer Ben Allen said on behalf of the state. “The child had an emergency come up, and Mom took care of the emergency. That’s what we expect of all good moms.”

Phew. The mother, Brooke Johns, no longer faces 60 days in jail & a $5K fine because she was being a normal parent. But how did it even come to this in the first place???…

The incident occurred March 29, when Johns — then nine months pregnant — was driving in Augusta. Her son told her he was about to pee his pants, but by the time Johns pulled into a gas station parking lot, she realized they wouldn’t make it to the toilet.

“He was peeing before his pants were even all the way down, so obviously he had to go,” she said in April.

A Richmond County Sheriff’s deputy saw the incident and gave Johns a citation for disorderly conduct.

“She allowed her male child to urinate in the parking lot. I observed the male’s genitals and the urination,” the officer wrote on a copy of the ticket that was obtained by CNN affiliate WRDW. “Public restrooms are offered at the location.” 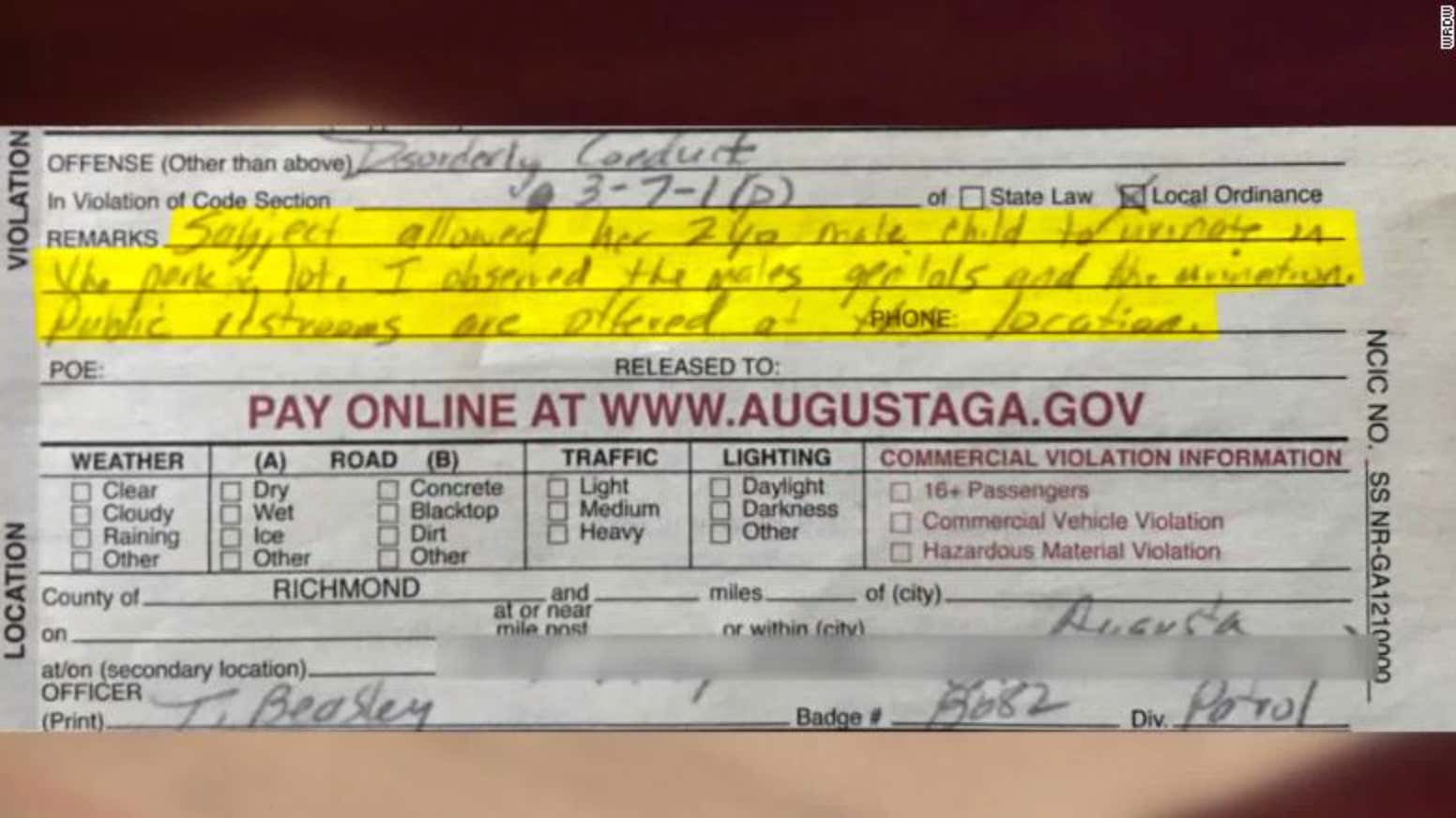 “I observed the male’s genitals and the urination”?!?! Who gives a shit?! It’s a f*cking 3 year old!

As a little kid I remember crabbing down the Jersey shore & being held over the edge of the boat when I had to pee. My parents also kept a bucket in our wood-paneled van for long road trips because I had (and still have) the world’s smallest bladder, and we’d never reach our destination if they stopped every time I needed to. So to anyone boating in Ludlam Bay or cruising on the highways in the late 80s, if you caught a glimpse of my small, pasty butt, know that even then I, and my exhausted parents, had zero fucks to give. When you’re barely past the potty training phase & you gotta go, you gotta go.

These days, I’ve also been with my friends when their own toddlers desperately had to pee, and have stood in a couple parking lots while they allowed the same thing this woman was charged for. It’s WILD to me that anyone could ever possibly be mad about that, or give anyone a hard time for it. Absolutely shitty pee judgement all around by this officer. I’d like to think most police would never make that call.

Thankfully the cooler minds of justice prevailed here & got her off the hook. It’s just a shame she had to deal with that 9 months pregnant and then go through the stress of the courts & potential of jail time looming over her head.

All that being said, I’m going to be extra careful tonight when I leave the bars. When I gotta go I’ll be sure to find a full coverage dumpster.