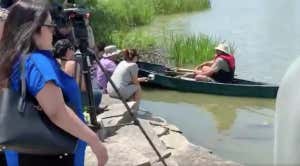 We’re officially on Day 3 of Chicago Gator Hunt 2K19 and after 48 hours of reporting live from the scene I’ve never been more ready for something to be over with. I love Gator Bob and it’s legit been an honor to work by his side, but clearly we need a new game plan here. We currently have 6 traps scattered throughout a massive lagoon region with only one patrolling canoe on sight. If GB’s getting paid by the hour then this is a solid method, but if not then we should be going Swamp People on this stray gator now. Reason 1 being I can’t miss my day job for this shit again, and reason 2 being that the city is now referring to it as “Chance The Snapper.” First 10 Day and Acid Rap make it on to every streaming service after all these years, and now the dude gets a local alligator named after him? Low-key hell of a week for Chance The Rapper. This gator’s had it bad enough, so I’m not going to be referring to him by his poll-generated title. Instead I’ll be going with the nickname that my guy and his dad gave it,”Humbolito,” for the remainder of Gator Hunt week.

And now, before I hit the field for day 3, a quick recap of Gator Watch day 2 for the people who have better things to do than gaze at a pond for 2 consecutive days treating an Animal Control officer like he’s ’06 Freddy Prince Jr.

So day 2 may as well never have happened as far as progress goes. It was basically 24 hours of everyone burning to ashes in 150 degree weather and nearly fainting from the amount of blood lost to mosquitoes, while poor Alligator Bob was on the cusps of going Kanye on some reporters (not me since I was undercover.) Gator Bob’s strategy is to trap Humbolito at night, since that’s when it goes hunting, but last night there was a colossal Salsa going on at The Humboldt Park Boathouse that takes place every Wednesday evening which kept the gator from showing face again. As an honorary animal control officer this gets pretty frustrating. Again, I’ve only been one for 2 days so I’m no expert, but I feel like we could be doing more here. Not saying we as a city may be milking this, but we as a city may be milking this. If we make it to day 4 and don’t have a SWAT team of animal control officers in that lagoon trying to catch this thing then I’ll call up Turtle Man myself to handle it.

Hopefully Gator Bob will soon be happily forgotten in the internet rafters with Sister Jean and Salad Fingers and the rest of us can move along. In the mean time, I’ll keep taking the free press.

My work’s gonna fire me if I don’t show up again tonight, but follow along for coverage during the day while I sit next to this swamp for 3 hours contemplating my life’s worth.