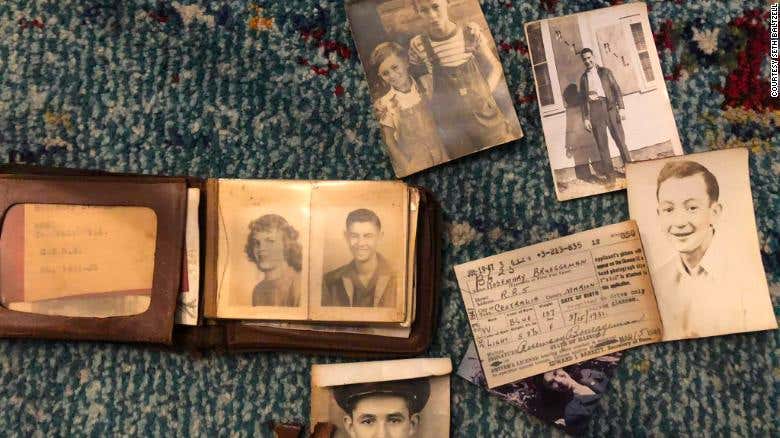 CNN - When your wallet is stolen, you probably don’t expect to get it back — especially after 75 years.

Betty Sissom, 89, received the gift of a lifetime last week when her wallet from the mid-1940s was returned to her.

Sissom’s wallet, along with more than a dozen others, was discovered when a congregation in Centralia, Illinois, was converting the former Centralia High School building into a church. Pastor Seth Baltzell said a plumber found the wallets stashed in the wall of a girls’ bathroom.

“We’ve been working on this building for six months. I’ve been kind of waiting for that really cool thing that nobody’s seen in the last 75 or 100 years to pop out,” Baltzell said.

The pastor believed that the wallets were stolen 75 years ago and wanted to try to reunite them with their owners. He posted pictures on Facebook along with names from some of the IDs in them. Much to his surprise, the post has been shared more than 3,000 times.

Take the fact that this wallet was stolen out of the equation here because I more-so want to talk about lost wallets, which kind of relates. Also forget that it’s an antique because of course she wants that shit back. It’s old as fuck and may be worth money or possibly just holds some sentimental value at this point. I’m talking about losing your plain ass $20 Kohls wallet.

Now, there might be some people who think that it’s not a big deal because she probably doesn’t even remember losing the wallet.

Those people are big time wrong. EVERYBODY remembers every wallet they’ve ever lost. Sure, you may not remember all of them off the top of your head now, but if someone came up to you and said “Hey, I found your wallet buried under a bunch of sand at the beach” you will instantly enter that time warp to when your heart sank and you held all your buddies up at North Ave. to help you dig because you couldn’t find that wallet. You’d even remember which of your friends actually tried to help find it and which ones half assed it because they didn’t give a fuck.

Keys and cell phones apply the same too. I thought I lost my keys at a Citgo about a month ago and was digging through the trash to try and find it. I ended up finding them, but say if somehow they miraculously were returned 3 years later I’d instantly remember digging in the trash for them. There’s really no rhyme or reason to this, but it just fascinates me how well your brain can go back when something like that happens. I guess that’s just how brains work.

I suppose that this doesn’t hold true for the Whitesoxdave’s of the world that lose their debit card regularly, but maybe it does?

P.S. – Of course her name is Betty. Such a perfect Southern Illinois old lady name