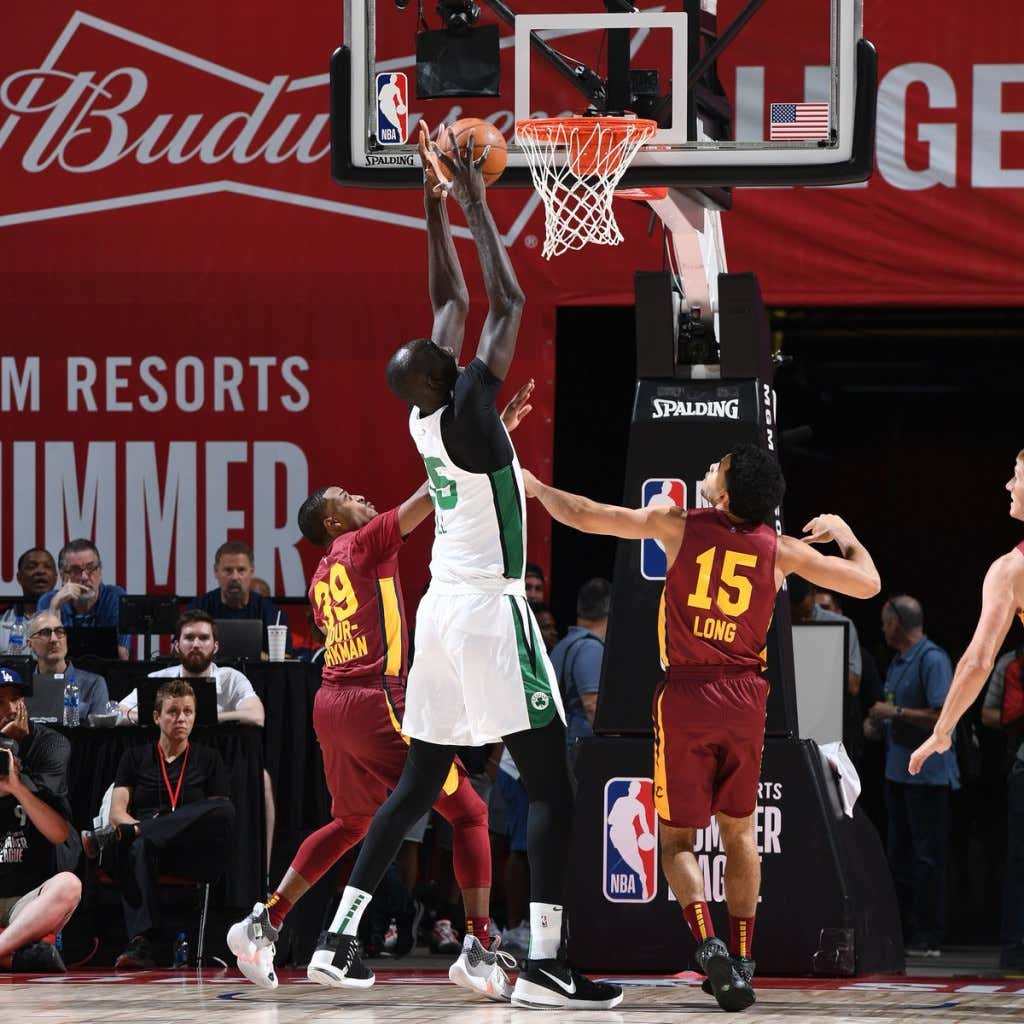 Is it crazy to say that through two games in Vegas the Summer Celtics have been more fun than like 75% of the regular Celtics past season? That certainly isn’t a sentence I loved typing, but it’s sort of the truth no? More than anything we as a fanbase needed to get back to a place where this team was actually fun to watch, and that’s the best way I could describe what we’ve seen so far in Vegas. Watching this team play hasn’t been a chore, but rather highly entertaining which is exactly what you want from your Summer League squad. Give me hope, give me hilarious highlights, and give me wins. The Celtics have delivered in all three areas and are one of eight teams who remain undefeated. In my opinion they are quickly becoming must watch stuff thanks to the man, the myth, the legend that is Tacko Fall and we’ll get to him in a minute, but for the most part it’s hard to not be impressed with how all the young rookies are adapting to this level of basketball. It’s ten billion miles away from actual NBA competition, but I think we can all agree it’s certainly better to see them playing well than struggling like say….RJ Barrett. Does it guarantee it translates to October? Well rule #1 of Summer League says yes, but before we get to the actual season we should first talk about what we saw last night.

– I am going to make this as clear as I possibly can. When the Celtics first signed Tacko Fall I think everyone was pumped because A) This team needs bigs B) He’s fucking gigantic C) Did I mention he’s a goddamn giant. Well now that we’ve seen him play a few games there is only one conclusion you can come to when discussing this guy

We’ve moved past the part of enjoying Tacko for the jokes and have moved into a world where you know what, this kid is actually pretty good! Extremely limited sure, not the best conditioning to play long stretches fine, but there is really something there. It’s still hard for my brain to comprehend how a human can be this size and this athletic but I’m not going to question it. Tacko is honestly such a problem not just because he’s a monster but because he can actually move! This isn’t a Boban or Manute Bol situation, Tacko moves so much better and there’s something to be said about the ability to just throw it to the ceiling on offense where nobody else can get it. Defensively he’s held up rather nicely against faster competition and even if his future is still uncertain, he continues to prove that he just may be able to hang at this level. Players simply give up trying to stop him, it’s incredible to watch.

The question that’s becoming harder and harder by the day is what do the Celtics do. Do they give him Yabu’s spot? Maybe a two way? Maybe Tre Water’s spot? Who knows, that’s for Ainge to figure out. All I know is the more I watch him play the more I need him on the roster one way or another. I can’t believe this dude didn’t get drafted but maybe that’s because people are idiots and didn’t realize what they had. Ainge pounced and who knows maybe he just found the next great end of bench center in the league.

– Call me crazy, but being +41 through your first two Summer League games feels pretty good. A guy who is all about impacting winning, that’s how I would describe Grant Williams so far this summer. The kid impacts winning. Whether it’s taking a charge, crashing the glass for offensive rebound putbacks, hitting threes, he really has shown that maybe he can FINALLY be a guy that Ainge hit on in the late 20s. That’s been his problem area his entire time as a GM of this team, but Williams looks so calm and so smart out there you get the sense that Brad is going to love him.

What I loved about his night was there was one possession where I’m pretty sure Grant guarded every position on the floor, and then when he was matched up with a bigger guy he shrugged off Onuaku almost as if he was offended at the notion that he needed to switch defensively. He then proceeded to lock the dude down and force a shot clock violation. We already loved Grant Williams for everything we’ve seen off the court, well now he’s adding real reasons on the actual floor, and that’s exactly what I was hoping for.

– 90% from the FT line. Thank you for correcting that bullshit from the first game. I slept like a baby after looking at that.

– We’re starting to see why Ainge may have been so high on Carsen Edwards. This dude jacks it from deep like he’s been on the Celtics for years and without hesitation. I’m still skeptical about how he’ll defend on the next level, but in terms of his offense there is no denying this kid can fucking shoot

His first 6 shots were threes which is classic Celtics basketball, but he responded with an efficient 6/10 performance and once again kept his turnovers low and finished a starter best +8. By all accounts the initial backup PG spot is his to lose, and considering that second unit may need scoring to help create space for Jaylen/Hayward/Kanter I think he certainly fills that role. For a little dude he also appears to be strong as hell which fits into this team’s blueprint and you could argue he’s been one of the best players through two games on the entire roster. Not bad for a second round pick.

– But let’s not ignore his running mate Tre Waters either. I can admit, I did not watch a lot of LSU basketball last year and had no idea what to expect with this kid. You get taken in the 50s and it’s a toss up really. Well, he’s another kid that has shown that this next level isn’t a problem for him.

Quick as shit, he’s tied for the team lead in assists per game, leads them in steals, and is certainly making his case for at least a two way deal. This team does have a shit ton of ball handlers already from Kemba to Smart to Wanamaker to Edwards so who knows if Ainge would rather use that spot on a big, but Waters has certainly shown that he’s got some game. He was basically their entire offense early, and if he continues to shoot like this someone is going to nab him.

– He wasn’t perfect, but Timelord continues to show flashes of why we are all so excited about him.

He does need to improve his decision making in terms of knowing which shots to try and block and which to just go and box out, you can see his willingness to pass and move the ball on offense which is great to see and will be much needed whenever he plays, but I’m still a little nervous about him around the rim. I just feel like all these soft jump hooks he gets right at the rim are going to be tossed into the crowd once he plays real NBA competition. Love to see him just slam it instead, but maybe coaches are asking him to play that way for now, who knows.

He is still blocking shots like we know he can, he had another 2 last night, but only 2 rebounds which isn’t exactly getting my dick hard.

– How about this defense though? Another team under 90, this time holding CLE to 33/39% while also dominating the rebounding battle 44-31. It’s pretty simply guys, defend and rebound and you’ll basically never lose it doesn’t matter if it’s fake basketball or the playoffs.

– Can’t be Summer League without some sloppy play, and the 17 TOs were pretty gross.

– In classic Celtics fashion, of course the blew a double digit lead. Good to see that strategy is making it’s way to the Summer League after the regulars pretty much made that their calling card. I believe things got as close as 4 before the Celts pulled away again and honestly I have no problem with this. The summer is when everyone has to mentally prepare for the regular season, so this was good practice for us as fans to get our mind right for when this shit happens during the regular season because you know that’s coming. Nobody hates blowing double digit leads more than the Boston Celtics and you just have to accept that.

– How about the delayed start because of the Wizards/Nets game? Holy shit was that brutal. Fouling down 3 and shit with 10 second left, that should have been a fineable offense. This game tipped like an hour late because of that bullshit and I don’t know how that was allowed.

– Aaron Harrison kinda stinks huh? Might be time to take him out of the starting lineup and try someone else.

– There is this really weird thing happening in my mentions in regards to Yabu. Literally he takes a step and someone tweets me how much he sucks and is the worst basketball player of all time. Like he misses a shot and I hear about it almost as if he’s the only player on the roster that isn’t allowed to miss. But then when he does shit like this

I don’t hear a peep. Look, has he been dominating Summer League? God no. In fact he’s been pretty ordinary through two games and that’s definitely concerning. But he’s also doing things that are exactly what he’ll need to do if he ends up making the roster. Hustle plays, moving the ball, good rebounding and good defense. Would it be way cooler if he was dropping 20/10? Of course, but last night I feel like he filled his role fine and yet people are ready to kick this dude out of the league.

Guess what, this team needs bigs with NBA experience on it. That’s just a fact. Why don’t we see what Yabu actually does with potentially a real opportunity before we rush to judge? We all love Tacko but we have no idea how he stacks up against real competition. We’ve at least seen Yabu look playable when things really count. This random gang mentality about Yabu is really weird, and who knows maybe Ainge ends up cutting him, but I just don’t see the reason for all the hate that is in my mentions every time the Celtics play.

But let’s not lose focus of what’s important here. The Celtics are fun again. The games are fake and 90% of these dudes won’t see real NBA minutes but none of that matters. Winning is always fun, Tacko is dominating people and the kids have looked more than solid in their first taste of NBA basketball. After the dogshit year we all just went through the Summer Celtics are putting us together piece by piece and I for one am grateful.