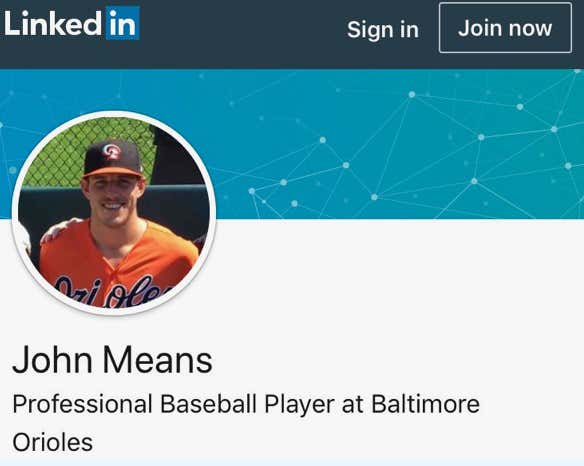 John Means didn’t have a professional headshot to attach to his profile, so he went with a picture of himself in an Orioles jersey and a Bowie Baysox cap. His work experience was limited — he put “Professional Baseball Player” for his time in the minors and “Substitute Teacher” for the offseason job that taught him he’s not great with kindergartners.

Accepting the possibility that he soon had to begin life after baseball, Means made himself a LinkedIn page.

Back with Double-A Bowie for a third straight season, Means thought he might have peaked. A left-handed pitcher who never threw particularly hard, he faced an uphill battle. Each outing with the Baysox made him further doubt whether he was supposed to play baseball.

Great story out of the Baltimore Sun today that details how Orioles All-Star pitcher John Means almost quit the sport entirely last year. He went as far as to create a LinkedIn profile to find another job. He didn’t even have a professional headshot for his profile picture. He had to use some picture of him pitching. It almost looks fake. With some convincing, he gave baseball another shot. Flash forward a year and he has the second lowest ERA in the American League, and is in Cleveland this week as an All-Star. Wild.

I have definitely said to myself a few times this season, “who the fuck is John Means?” I mean the name just doesn’t sound like a professional athlete’s.  Means wasn’t even a starter to begin the year. He faced the Yankees in his first three appearances as a middle/long reliever.

Since that point Means became a starting pitcher, and a really good one. He has given up 4 runs in a game only twice. He’s given up three runs in a game three times. In the other nine starts he has been at two runs or less. The dude can pitch and it’s crazy to believe he went as far as to create a LinkedIn page to quit the sport at the age of 26. The world is full of success stories that came so close to not happening, and I can’t get enough of them.

His whole story to even get into the Orioles system is nuts. He had zero offers from DI, DII, or DIII schools out of high school and went to a community college instead. He was taken in the 46th round out of high school, but only because he played along side future #5 pick, Bubba Starling, so some scouts noticed him.

He struggled his freshman fall and opened the season throwing in the Greyhounds’ midweek games, facing the JV teams of even smaller schools. After a teammate butted heads with coaches and got suspended, Means was pushed into Fort Scott’s weekend rotation. His first conference start came against Cowley County, a perennial junior college contender.

Means eventually caught the eye of the West Virginia pitching coach and transferred over there. He took the ball against one of the top speeds the previous year in the CWS, UNC, and tossed a one-run complete game. He was later drafted that year in the 11th round by Baltimore. The rest is history.

Just a wild story about a minor leaguer who almost gave it all up. That minor leaguer is now an All-Star. Didn’t know much about this guy until today, now I’m a big fan. It’s wild how close you can get to quitting, then the luckiest of breaks happens, and boom your life starts. If that isn’t some inspiration for your Monday then I don’t know what it’s going to take.

This quote sums him up perfectly.

“I’m the last person everybody who has played with me and against me would’ve thought is a major league All-Star,” Means said.

No one knows how he’s here, but John Means is an All-Star.