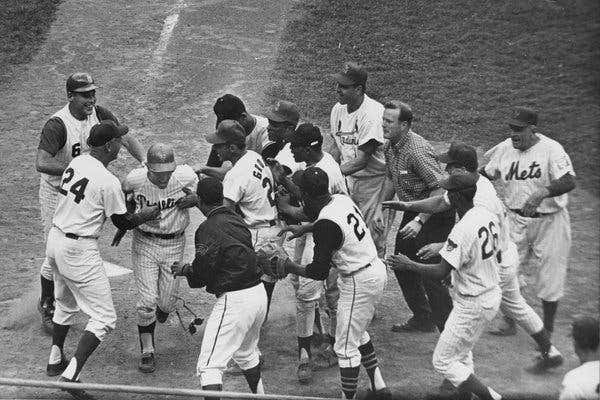 In conjunction with the World’s Fair, the 1964 All-Star Game is held at Shea Stadium, the new home of the New York Mets. In one of the more thrilling mid-summer classics, the National League wins 7-4, rallying with four runs in the ninth as Johnny Callison of the Philadelphia Phillies hits a walk-off three-run home run off Dick Radatz of the Boston Red Sox to earn MVP honors.

The New York Mets in their third season hosted their first All-Star Game at the same time they opened their new home, Shea Stadium. The new modern stadium was state of the art at the time and seemed to blend in well with the World’s Fair, going a short walk away. In a time when All-Star teams were not selected by the fans, Ron Hunt became the first member of the Mets to start an All-Star Game, playing second and batting eighth, for Walter Alston the manager of the Los Angeles Dodgers who led the NL squad.

The American League tabbed Al Lopez of the Chicago White Sox to manage, as the New York Yankees changed managers after the 1963 pennant. Making the start on the mound for the American League was Dean Chance from the Los Angeles Angels, while Don Drysdale of the Dodgers started the game for the NL.

The American League scored in the first inning as Jim Fregosi led off with a single and scored on an RBI single by Harmon Killebrew of the Minnesota Twins. Drysdale would not allow another run, as he left after three innings, while Chance allowed just two hits in three innings. Jim Bunning of the Phillies pitched around two hits in the fourth, while John Wyatt of Kansas City Athletics came in for the American League. Wyatt would not do as well, giving up home runs to Billy Williams of the Chicago Cubs and Ken Boyer of the St. Louis Cardinals as the NL took a 2-1 lead. Camillo Pascal of the Twins came in to pitch the fifth, as the National League added another run with Dick Groat of the Cardinals doubling in Roberto Clemente his former Pittsburgh Pirates teammate.

Chris Short of the Phillies took over for Bunning in the sixth as the American League tied the game 3-3, with Brooks Robinson of the Baltimore Orioles, driving in Killebrew and Mickey Mantle of the New York Yankees. Turk Farrell of the Houston Colt .45’s came in for the seventh as the AL regained the lead with Yankees catcher Elston Howard scoring on a sacrifice fly by Jim Fregosi.

Dick Radatz of the Red Sox entered the game in the seventh to pitch the final three innings, as Juan Marichal of the San Francisco Giants pitched a scoreless ninth. Down 4-3, the NL began their rally a Willie Mays of the Giants led the inning off with a walk and stole second base. He would later come across on an RBI by teammate Orlando Cepeda. Curt Flood of the Cardinals would come into pinch run for Cepeda who advanced to second on an error. After a strikeout of Ken Boyer, Johnny Edwards of the Cincinnati Reds was intentional walked to set up a double play. Hank Aaron of the Milwaukee Braves came to the plate as a pinch hitter for Ron Hunt and proceeded to strikeout.

Johnny Callison of the Phillies came up next and assured there would be no extra innings, as he hit a three-run home run to win the game for the National League 7-4. It was the third time in the history of the mid-summer classic that the game ended with a home run. The other two occasions were Hall of Famer Ted Williams who ended the 1941 All-Star Game in Detroit and Stan Musial who ended the 1955 All-Star Game in Milwaukee. There has not been a walk-off home run in the All-Star Game since.