So earlier this year, I shot out a tweet saying I was planning on hitting up more baseball stadiums now that my job allows me to travel a little more:

For as big a baseball fan as I am, I have only been to both Chicago stadiums, Miller Park, Milwaukee County Stadium, Old and New Busch Stadiums in STL, Great American Ballpark in Cinci, and Old Yankee Stadium.  I’m not as well travelled as I should be for a baseball fan.

So last week I took in Fenway Park for the first time.  I will say this: I really, REALLY wanted to hate it.  I loathed old Yankee Stadium.  My mom’s side is from Toms River NJ so we planned a few summer vacations around the White Sox playing the Yankees in NYC when I was in HS and it was honestly the worst stadium experience I’ve ever had.  I also don’t really like Wrigley, though it’s much better now after the renovations.  I thought I’d hate Fenway the same.  But…. I couldn’t have loved it more.  There is only one thing I hate about it, so let’s break it down.  This is going to be a sort of PSA for anyone not a Boston fan looking to travel to see their team play in Boston like I just did.

Food grade: A and F

“but WSD how can the food be both an A and an F at the same time you lard ass?”

Let me tell you how:

There’s this dude who has a sausage cart out on Landsdowne Street that goes by the name of “The Sausage Guy”.  Love it, direct and to the point.  He (obviously) sells sausages out of his cart.  Now being a White Sox fan, I’m spoiled with really, really good sausages at baseball games.  Well this dude legitimately had the best Italian sausage I’ve ever put my lips on.  HOLY SHIT was it good: 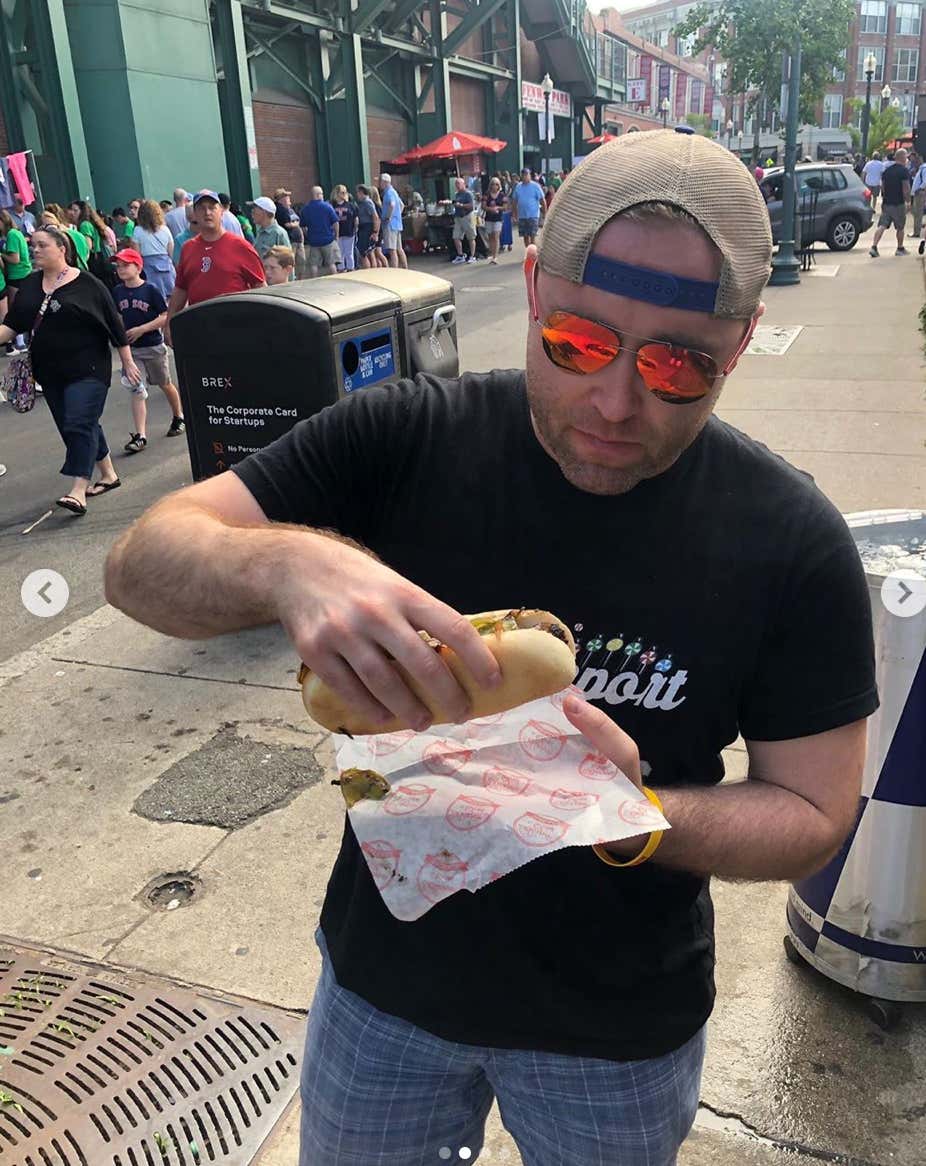 there’s no such thing as a perfect score, but if we’re going by straight hot dog review scores, I’m giving it 9 point something.  Red Sox fans know what I’m talking about.  Couldn’t recommend it more.

But…. then we get to the Fenway Frank:

It was foul.  Absolutely abhorrent.  Now a Dodger Dog is the worst hot dog I’ve ever consumed in my life, maybe one of the worst food items in general I’ve ever consumed, but Fenway Franks aren’t much better.  In fact Carl described a Dodger Dog as tasting like “wet rat feet”. Disgusting.  My score was probably generous in retrospect.  So that’s where the F comes in.  There is no defending this if you’re a Red Sox fan.  You don’t have to like all the shit Chicagoans put on their hot dogs (tomato slices, pickle slices, etc.) but the hot dog itself was grade A trashola.  Hot dogs don’t have to be Vienna Beef, but for them to be any good they have to be beef hot dogs at the very least.  Fuck outta here with pork hot dogs.  Vile.  Go get some Sabretts or Nathan’s Fenway.  You’re embarrassing the hot dog game.

Other than that, the beer selection was also great.  They had every sort of beer you can imagine.  I’m not a big Sam Adams guy but they (obviously) had a great selection of those as well as any domestic and spiked seltzer you can imagine.  I haven’t been to Wrigley yet this year, but you basically only have your choice of Anheuser Busch beers.  Fenway SMOKED Wrigley in this regard.

Also got nice on some Santarpio’s Pizza before the game.

Again, I wanted to hate it because East Coast pizza but… I couldn’t.  It was very good.  I wouldn’t quite put it up there with Rosangela’s, Al’s or Phil’s (I’ve yet to try Vito and Nick’s) but it was excellent nonetheless.  It was about 15 mins from the stadium and many Boston fans recommended it to me prior to the trip, and I will forward that recommendation on to any potential out oft owners.  VERY good pizza.  Different, but good.

The Stadium Grade: A

we did a full on stadium tour prior to the game.  Shout out Dante for hooking it up.  We were deep into the bowels of one of the most historic franchises in all of sports.  It was a surreal feeling being that close to the batters box where baseball greats like Ted Williams, Babe Ruth and Ken Harrelson teed it up.  They also have a garden on the roof that is where they get all of their produce from.  The more ya know!

As far as sight lines and stuff: the stadium truly doesn’t have a bad seat in the house, unless you’re sitting high up in the RF corner.  We had awesome seats the two games we went out there and they weren’t expensive.  I think I paid $50 for seats right behind home plate about 30 or so rows up.  There are some poles you have to navigate around like Wrigley, but the stadium itself is fantastic.  The best stadium I’ve been to is New Busch Stadium in STL but Fenway is every bit as cool a place to watch a game.

You HAVE to see a game at Fenway Park sometime.  Make sure to add it to your bucket list if you are a baseball fan.

One of my favorite people on earth was gracious enough to have us come down to one of his local watering holes in Southie: Rear Admiral.

One of my life goals was to go to the “Hahvud Bah” from Good Will Hunting with RA one day and just lob him questions because he’s obviously got some of the best stories ever.  Well apparently that scene was filmed in goddamn Toronto.  Didn’t know that.  It honestly makes me think a little less of the movie, and it’s honestly one of my favorite films ever.  Sucks.

But the trip was too quick to truly do Boston correctly.  I flew in Monday AM.  I got so hammered at Lake Shake Sunday night that I said fuck it and went straight to O’Hare so I didn’t sleep through my flight on Monday.  Slept in the terminal.  Once I got to Boston I was so hungover that I needed a power nap before I hit Fenway.  Didn’t do any duck boat tours or freedom trail walking.  Just Fenway, Fenway and more Fenway on Monday.  Tuesday it rained all day which put a damper on my day as well.  That said if we’re basing the trip on Fenway alone, it was great.  Again, couldn’t recommend it more.

Ballpark Tavern and Bleacher Bars were our pregame and postgame spots.  Good spots so long as you can avoid talking to anyone at all and getting their Boston stink on you.

You win this round Boston.  I wish I could have hated it but Fenway blew my expectations completely out of the water.